China is launching a Mars probe to look for signs of life using a solar-powered rover which will be fired into space aboard a Long March-5 rocket in July Following a successful test in December, China commits to a launch in July The country's Mars mission will send a satellite probe and rover to the planet China says it will complete 24 additional test launches of the rocket before July

This week, the Chinese government announced it will launch its long anticipated Mars mission this July, delivering a research rover to drive across the planet surface searching for signs of life and performing environmental analysis.

The mission will use the Long March-5 Y4 carrier rocket, which the China Aerospace Science and Technology Corporation (CASC) has described as the country’s most powerful rocket.

The announcement comes less than a month after a successful test flight of an early version of the Long March-5 rocket, which saw the hydrogen-oxygen fueled engine complete a 100-second thrust. 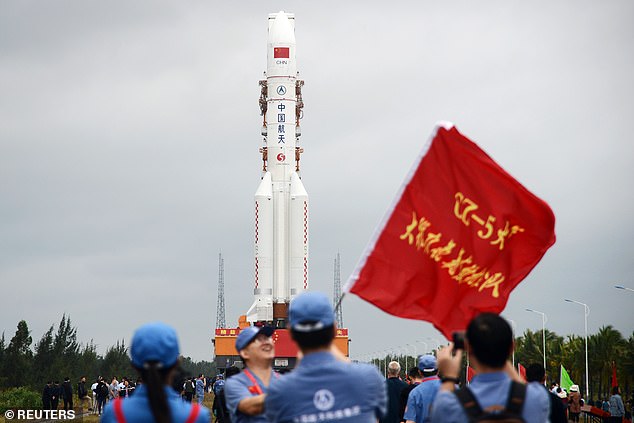 China's Long March-5 carrier rocket (pictured above), which successfully performed a test launch on December 27, will deliver a satellite probe and rover to Mars. It will launch in July and is expected to arrive on Mars in 2021

The rocket is nicknamed ‘Fat Five’ because it features four smaller thruster engines attached to a longer central launcher.

According to a report in Xinhua, the CASC will conduct an additional 24 engine tests throughout the winter and spring leading up the final launch in July.

The Long March-5 is expected to reach Mars in 2021, and in addition to the surface rover will deliver a satellite probe that will be set in orbit around the planet and help maintain communication with the rover and conduct research on the atmosphere.

China's Mars mission is one of three set to

Man gets the fright of his life after looking down to see spider dubbed 'Jumbo' ...