NASA’s Mars Reconnaissance Orbiter has beamed back photos of the charred remains of the European Space Agency’s Schiaparelli landing craft.

The Schiaparelli Lander, which crashed on the Martian surface on October 19, 2016, is shown as a crusty black spot surrounded by rusty red sand.

Now, three years on, HiRISE has re-imaged this location with new images that show the crash site with the impact clearly still visible. 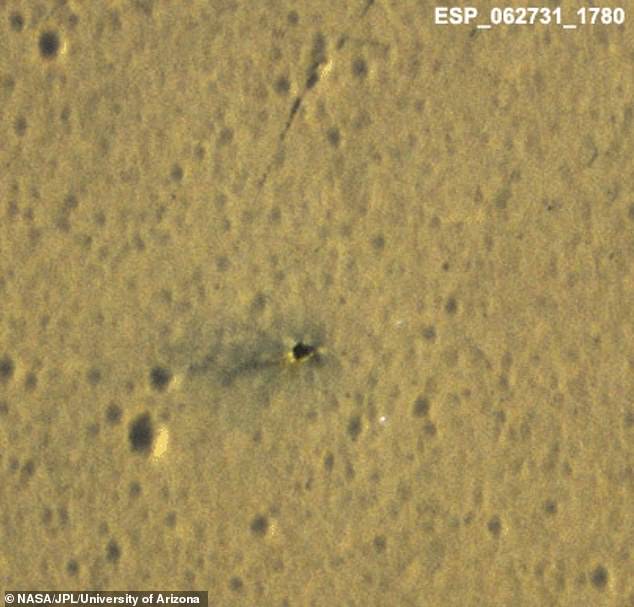 The new image, captured by High Resolution Imaging Science Experiment (HiRISE) on board the Mars Reconnaissance Orbiter last December, shows the diffuse dark material from the crash has slightly faded

Schiaparelli was launched back in March 2016 with its mothership, the ExoMars Trace Gas Orbiter (TGO), which successfully established orbit around the red planet.

While the TGO still takes atmospheric readings around Mars today, Schiaparelli is now represented by nothing but a crusty black spot.

The new images taken by HiRISE on December 14 last year shows a much clearer atmosphere compared to initial photos of the site from late 2016.

Another image taken on March 25, 2019 while dust was still settling from a dust storm that encircled the planet, so surface features had low contrast.

Much of the diffuse dark material from the crash that left a trail in the dust has faded, making the black crater more distinct.

At least two bright spots of light are also just about visible on these new images, as on the 2016 originals. 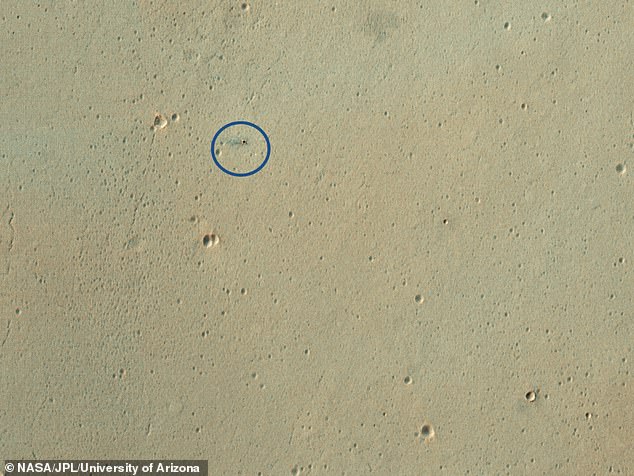 The ExoMars Schiaparelli Lander crashed on the Martian surface back on 19 October 2016. Marked in blue is its final resting place in this new image, dating from last December 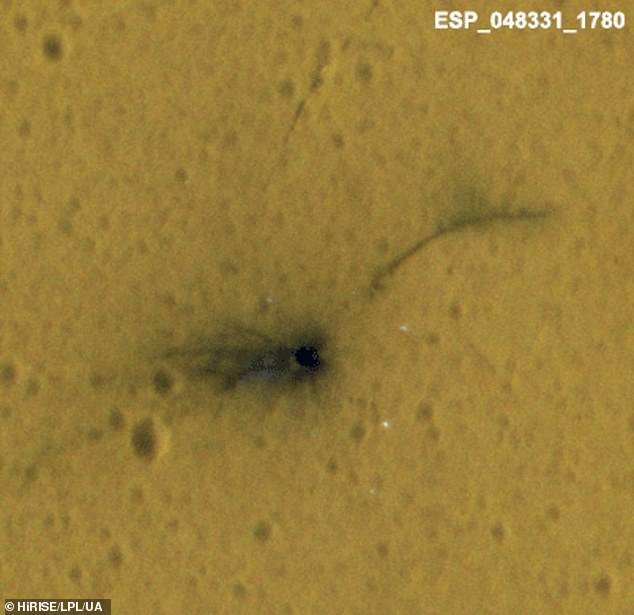 The main goal of ExoMars is to find out if life has ever existed on Mars.

The spacecraft on which the Schiaparelli travelled to Mars, Trace Gas Orbiter (TGO), carries an probe to study trace gases such as methane around the planet.

Scientists believe methane, a chemical that on Earth is strongly tied to life.

The second part of the ExoMars mission, delayed to 2020, will deliver a rover to Mars' surface.

It will be the first with the ability to both move across the planet's surface and drill into the ground to collect and analyse samples.

Schiaparelli was designed to test technologies for the rover's landing in four years.

Schiaparelli's main mission was to test technology for future soft landings on the surface of Mars.

The Schiaparelli descent and landing module separated from the TGO as planned on October 16 2016, and coasted towards Mars for three days.

‘They are now on a high-speed collision course with Mars, which is fine for the lander – it will stay on this path to make its controlled landing,' were the words of ExoMars flight director Michel Denis at mission control in Darmstadt, Germany before the crash.