Kansas City Chiefs fans celebrated their team's win over the San Francisco 49ers in the Super Bowl so intensely, it was seen on weather radar.

The National Weather Service posted a looping video on its Twitter page showing bursts of fireworks in the sky of the Missouri city from 8:41 PM until 9:29 PM.

The display could be seen as far South as Clinton and Butler, Missouri, which are about an hour's drive away from Arrowhead Stadium, where the Chiefs play their home games – and it even spilled across the border into Kansas, CNN reported.

The celebration follows the Chiefs turnaround victory, after trailing behind their rivals 20-10 until the fourth quarter of the game and ending the game 21-30. 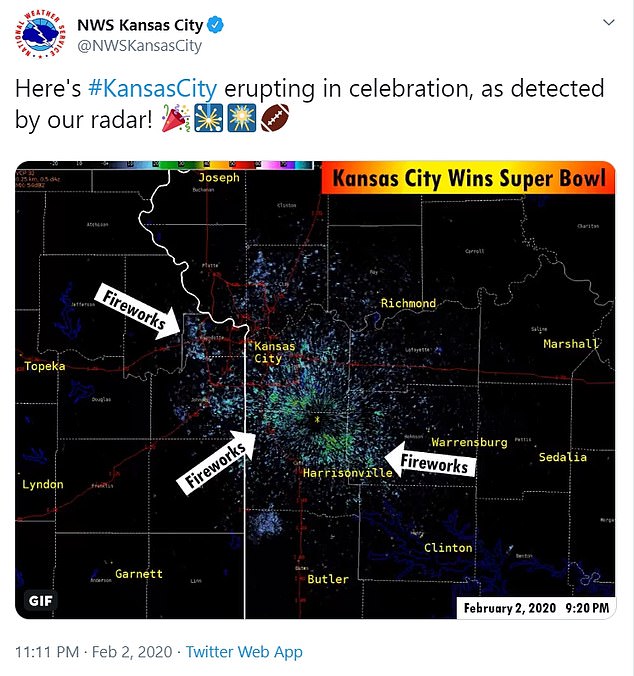 The National Weather Service posted a looping video on its Twitter page showing bursts of fireworks in the sky from 8:41 PM until 9:29 PM

'You know, we were down 20-10 and he was telling us to believe in the fourth quarter. He seen it in some guys' eyes, they were getting down, including myself,' Tyreek Hill, wide receiver for the Chiefs, said.

'He brought the guys together, and you saw what happened, man. We pulled it off.'

And around 8:41 PM, the team's home city broke out into a huge celebration.

Aaron Mull, a Kansas City Chief fan, was in the heart of the city during the win and witnessed the outburst at the end of the game.