Researchers use slow motion video to reveal how the mudskipper fish uses its pectoral fins as legs and its tail as a propeller to skip across the surface of rivers, walk on dry land, and even climb trees A team of scientists traveled to Java to investigate the mudskipper fish The mudskipper is famed for its ability to walk on land using its fins like legs The team discovered a previously undocumented panic behavior from the fish It was able to use its tail in a rapid beating motion to skip across a river surface They assumed the radical movement was a way of evading threats and reaching dry land

A team of scientists from the University of Edinburgh traveled to Java to research the mudskipper, a mysterious species of fish that’s capable of using its pectoral fins like legs to walk on land and even climb trees.

While observing the mudskipper the team noticed a surprising new behavior.

Instead of climbing out of the river waters they found it in, it appeared to jump out of the water and skip across the surface in a sharp zigzagging motion. 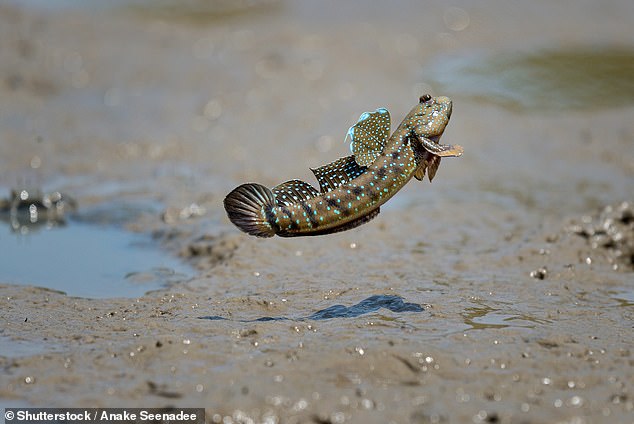 The team was familiar with many instances of fish being able to leap out of water, but none had ever encountered a case of a fish that could repeatedly hop scotch across the surface of a body of water.

To better understand the dynamics of what was happening, the team captured a series of slow motion videos to breakdown exactly how themudskipper was able to accomplish such an unusual feat.

‘This species of fish is an odd one as it likes to spend more time out of water than in it according to our observations,’ the University of Edinburgh’s Parvez Alam told Newsweek.

‘We expected tree climbing, as we had known about this for a few years... We didn't expect it to start hopping across the surface of the water.'

The key, according to the frame by frame breakdown, was an accelerating burst of back

CHRISTOPHER STEVENS: Highland views from Heaven, but a fishy fry-up from Hell...