Mars took 20 million years to become the big rusty globe that it is today, according to a new study – almost 15 million years longer than previously suggested.

US scientists think up to three large asteroids around 620 to 1,240 miles (1,000 to 2,000km) in diameter may have hit the planet relatively early in its development.

They think the planet then formed gradually, accumulating mass by pulling particles into its gravitational field that bulked it up to reach its current 4,200-mile diameter.

The study contradicts previous theories that the Red Planet grew rapidly in the space of just 2 billion to 4 billion years after the Solar System started to form. 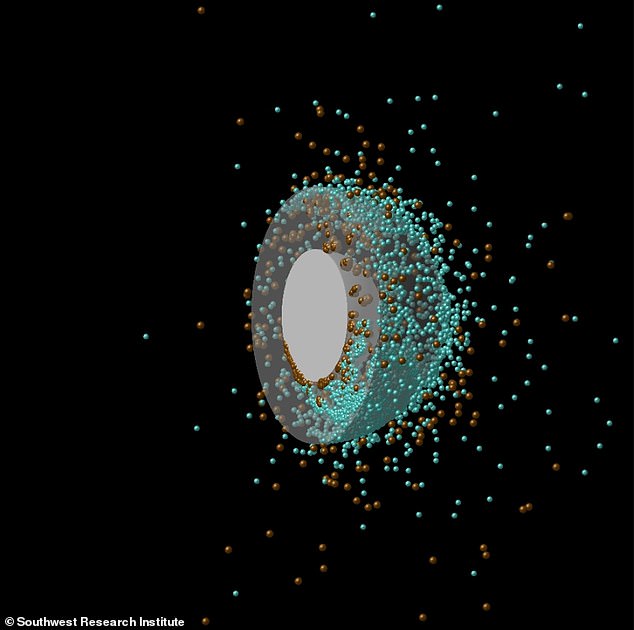 A Southwest Research Institute team performed high-resolution, smoothed-particle simulations of a large, differentiated projectile hitting early Mars after its core and mantle had formed. The projectile's core and mantle particles are indicated by brown and green spheres respectively, showing local concentrations of the projectile materials assimilated into the Martian mantle

There are around 200 Martian meteorites on Earth, thought to have been ejected from the Mars during collisions with large asteroids.

In the past, scientists have used these Martian meteorites to construct a timeline of the planet's formation and map its mysterious history.

But due to a limited number of meteorites available for research, the scientists think the 'prevailing view of Mars' formation may be biased'.

The team based their findings on computer modelling simulations of an asteroid hitting Mars that took place after the formation of its core and mantle – the layer surrounding the core.

'To investigate this process, we performed smoothed-particle hydrodynamics impact simulations.

'Based on our model, early collisions produce a heterogeneous, marble-cake-like Martian mantle.

'These results suggest that the prevailing view of Mars formation may be biased by the limited number of meteorites available for study.' 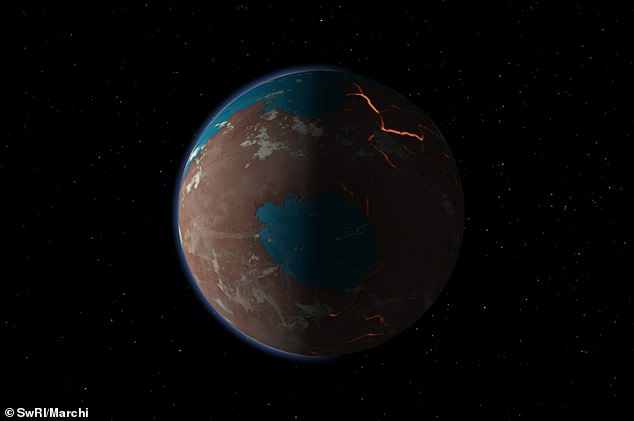 Scientists developed this illustration of how early Mars may have looked, showing signs of liquid water, large-scale volcanic activity and heavy bombardment from planetary projectiles. SwRI is modelling how these impacts may have affected early Mars to help answer questions about the planet's evolutionary history

Of approximately 61,000 meteorites found on Earth, just 200 or so are thought to be of Martian origin.

Samples show variations in elements such as tungsten, platinum and gold, which indicate Mars was bombarded by asteroids some time after its primary core formation ended.

'We knew Mars received elements such as platinum and gold from early, large collisions,' said Dr Marchi, whose study was published in Science Advances.

'To investigate this process, we performed smoothed-particle hydrodynamics impact simulations.

'Based on our model, early collisions produce a heterogeneous, marble-cake-like Martian mantle.

'These results suggest that the prevailing view of Mars' formation may be biased by the limited number of meteorites available for study.'

The previous estimate of rapid growth between two billion to four billion years was based on analysis of tungsten in the Martian meteorites.

Elements such as tungsten tend to migrate from a planet's mantle and into its central iron core during formation.

Evidence of these elements in the Martian mantle, as found in these meteorites, indicate that Mars was bombarded by rocky space debris sometime after its primary core formation ended.

Large, early collisions could have altered the balance of tungsten, which could support a Mars formation

PREV Hasbro's Halo-themed Nerf gun lineup includes a Needler
NEXT The average consumer throws away the equivalent of an entire McDonald's Big Mac ...