Drunk people are equally 'diverted' by unattractive and attractive people, according to psychologists, offering evidence that beer goggles really do exist.

British researchers carried out their study in ‘real-life drinking environments’ in bars and pubs in Lancashire.

The study used more than 120 heterosexual participants, both sober and intoxicated, who were asked to perform a letter identification task.

While drunk participants found both the appearance of both ‘unattractive’ and ‘attractive’ faces distracting to the task at hand, those who were sober were distracted more by attractive faces.

The findings indicate that the distinction between perceived attractive and unattractiveness is more blurred the drunker one gets – a modern phenomenon known as ‘beer goggles’. 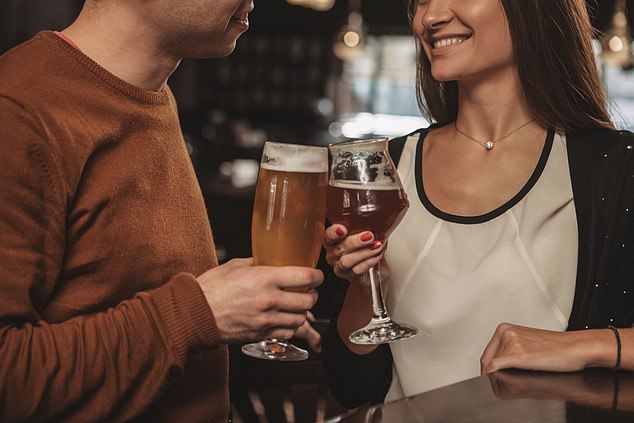 Edge Hill University's psychology department researched the science behind the 'beer goggles' effect, where alcohol consumption can influence whether we find others attractive

‘Most people have heard of the “beer goggles” effect, and our research adds to the body of evidence showing that there is some truth to this anecdotal wisdom,’ said co-author of the study Professor Derek Heim at Edge Hill University.

The study was carried out on students in establishments local to the Edge Hill University’s Ormskirk campus near Liverpool.

Participants were approached between 6pm to 10pm in a social drinking setting, with a total of 47 sober participants and 80 drunk participants.

'As we recruited participants while they were drinking in a real life bar, there was some natural variability in the intoxication levels of participants but we had a cut-off level for inclusion in the study,' Dr Rebecca Monk, the study's lead author, told MailOnline.

Their method involved what is known as a spatial cuing task, which is used to determine levels of attention.

This is the first time the method has been used to assess the beer goggles effect, the study authors say in Psychology of Addictive Behaviours.

Participants were required to determine and indicate the orientation of the letter ‘T’ on a computer screen, while being presented with images of attractive and unattractive people.

Don't spill it! Study participants, both lightly intoxicated and sober, had to perform a computer-based task while being shown photos of attractive and less