Mums can tell how well their child is developing from smell alone, according to new research that also found they can tell when they are about to start puberty.

The new study published in the journal Frontiers in Psychology involved having mothers smell the slept in t-shirts of their own and other children.

Researchers from Dresden University of Technology in Germany and others found a mother's nose is extremely sensitive to changes in her offspring's odours.

In the study of 164 German mothers, researchers found they could detect the developmental stage in their own child from scent alone. 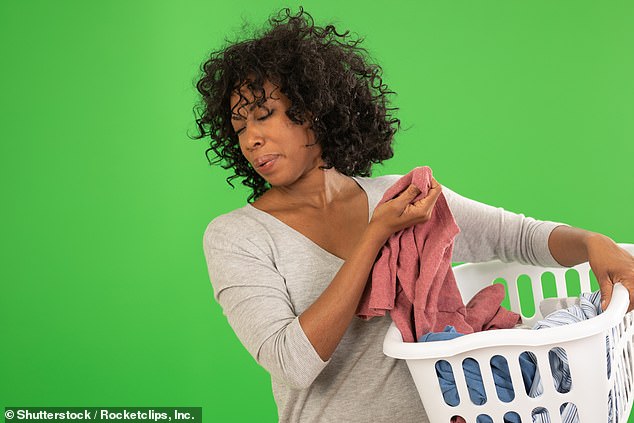 More than 160 mothers were asked to smell t-shirts worn by their children to see just how much they could identify about them. Stock image

The pool of volunteers were tested with body odour samples of their own and four unfamiliar - but sex matched - children who varied in age from baby to 18.

The study involved cotton T-shirts and onesies that children slept in for one night.

'It hints toward its importance for affection and care giving,' she added.

Overall, about 64 per cent of mums were able to properly identified the development stage of the child whose t-shirt they sniffed.

They generally scored higher when identifying odours from children before puberty than from those who had gone through or were going through puberty.

The mums found that smells from younger children were nicer than those from older children who had already started puberty.

'This suggests infantile body odours can mediate affectionate love towards the child in the crucial periods of bonding,' said Dr Schafer.

Identifying a child as having gone through puberty 'could be interpreted as a mechanism for detachment', according to the research team.

'This is when the child becomes more independent and separates itself from parental care,' Schafer said.

The study follows previous experiments by the same team that used MRI scans to see how maternal brains react to baby odours.

These showed neural responses to baby odours were similar to other MRI brain studies that tested for facial cuteness.