Eating an overly salty diet weakens your immune system and makes it harder for your body to fight off bacterial infections, a study discovers.

They then fed human volunteers an extra six grams of salt each day - about the same as two fast food meals - and found they developed immune deficiencies.

The World Health Organisation says humans should consume no more than 0.17 ounces of salt per day, which corresponds to roughly one teaspoon.

Studies in Germany found that many people regularly exceed the WHO recommended teaspoon of salt in their diet, putting their health at risk. 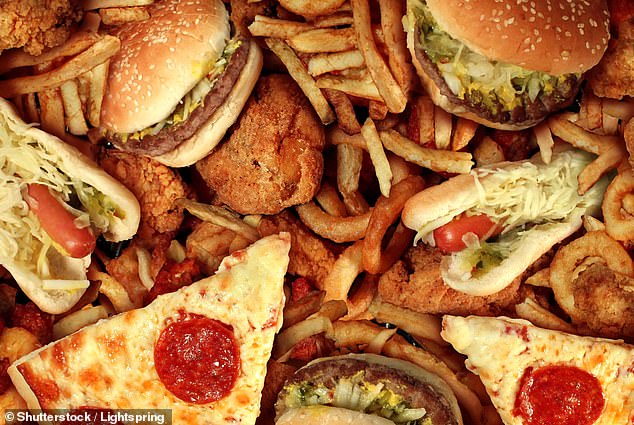 Eating a burger and fires twice a day will dramatically reduce the ability of your immune system to fight off bacteria infections, the study discovered. Stock image

Figures from the Robert Koch Institute suggest that, on average, men consume 0.4 ounces of salt per day, and women eat more than 0.3 ounces.

Christian Kurts, from the University of Bonn, said their new study proves that excessive salt consumption weakens an important part of the immune system.

The findings are surprising, as previous research seemed to show the opposite, according to Kurts.

For example, infections with certain skin parasites in lab animals heal significantly faster if they consume a high-salt diet.

Macrophages - immune cells that attack, eat and digest parasites - are particularly active in the presence of salt.

Several physicians concluded from the macrophages observation that sodium chloride has a generally immune-enhancing effect.

The new study's lead author Dr Katarzyna Jobin, of the University of Würzburg, said: 'Our results show that this generalisation is not accurate.'

She said the body keeps the salt concentration in the blood and in the various organs largely constant otherwise important biological process wouldn't work.

The only major exception is the skin, which functions as the body's salt reservoir.

This is why the additional intake of sodium chloride works so well for some skin diseases - but not for the body generally.

However, other parts of the body are not exposed to the additional salt consumed with food. Instead, it is filtered out by the kidneys and excreted in the urine.

The kidneys have a sodium chloride sensor that activates the salt excretion function.

Inside the Panther bubble: The proposal that could restart the NRL season mogaznewsen