Four multi-national companies - Coca-Cola, Nestlé, PepsiCo and Unilever are responsible for half a million tonnes of plastic pollution in six countries per year.

A study by international relief agency Tearfund is the first to quantify the amount of plastic waste burnt in Brazil, Nigeria, Mexico, India, China and The Philippines.

The plastic being burnt by the giant corporations creates emissions equivalent to 4.6 million tonnes of CO2 every year - the same as 2 million cars on UK roads.

Coca-Cola was the worst of the four companies - with 200,000 tonnes of plastic or about eight billion bottles burnt or dumped in those countries annually.

A spokesperson for Coca-Cola said they are talking to TearFund and 'recognise that we have a responsibility to help solve the situation to reduce plastic waste.' 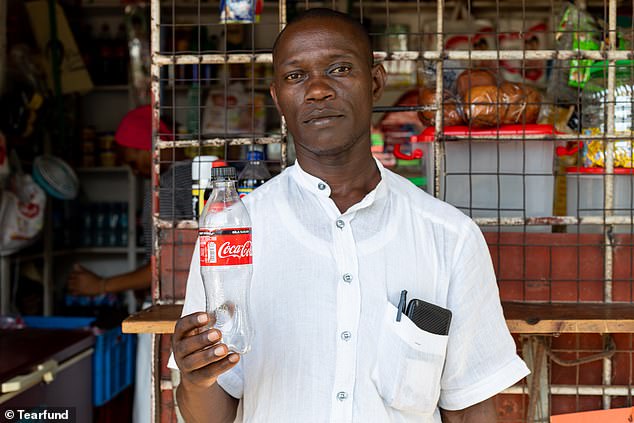 Tumaini Timotheo Mwende, a shop owner in Changanyikeni holds an empty bottle of Coca-Cola. Coca-Cola was the worst of the four companies - with 200,000 tonnes of plastic or about eight billion bottles burnt or dumped in those countries annually

The 'Burning Question' report focused on the actions and responsibilities of four of the world's biggest plastic polluters.

Tearfund wanted to determine what impact the billions of single-use products sold by these companies was having on the environment in developing countries.

They say the companies are selling single use plastic despite knowing packaging becomes pollution causing serious harm to the environment and people's health.

'Such actions – with such knowledge – are morally indefensible,' the charity said.

The study found that PepsiCo was the second worst plastic polluter after Coca-Cola with a plastic pollution footprint of 137,000 tonnes per year.

A PepsiCo spokesperson said: 'Changing the way society makes, uses, and disposes of packaging is important and requires pulling a lot of levers.

'At PepsiCo, we want to help build a system where packaging never becomes waste.

'That's why we're working to reduce the amount of plastics we use and have set a target to, by 2025, decrease virgin plastic content across our beverage business by 35%.'

The study found that across the six countries, Coca-Cola, Nestle, PepsiCo and Unilever create enough plastic pollution to cover 83 football pitches every day.

That is enough plastic to fill more than one football pitch every 20 minutes.

Nestle said the 'The Burning Question report by Tearfund highlights the continued challenges we face as a society, in tackling the issue of packaging and plastic waste.

'Nestlé is determined to look at every option to solve the complex challenges of packaging waste. We embrace multiple solutions that can have an impact now for our consumers and communities.'

A Unilever spokesperson said: 'We believe plastic has its place in delivering products safely and efficiently to consumers around the world. But the place for plastic is not in the environment. 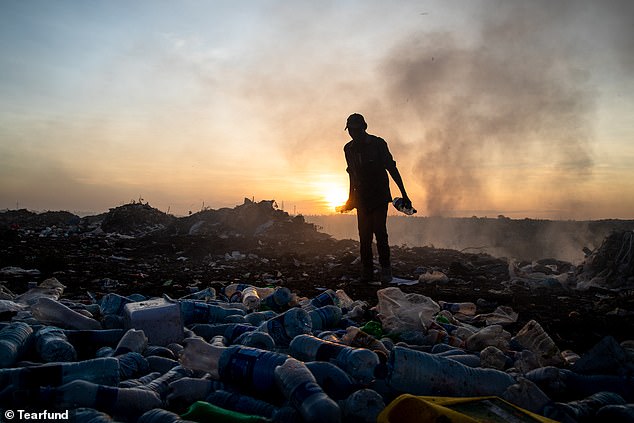 A waste picker collecting plastic bottles at the university dump at twilight. A study by international relief agency Tearfund is the first to quantify the amount of plastic waste burnt in Brazil, Nigeria, Mexico, India, China and The Philippines 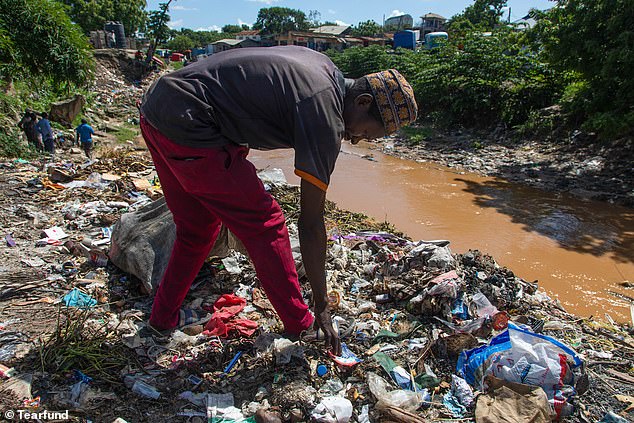 Jonsoni Pita, a waste picker, picking waste along the riverbank. The plastic being burnt by the giant corporations creates emissions equivalent to 4.6 million tonnes of CO2 every year - the same as 2 million cars on UK roads

'Our plastic is our responsibility and that's why we are taking radical action at all points in the plastic loop.'

However, the companies have not yet disclosed their plastic packaging on a country-by-country basis (one of the calls of Tearfund’s Rubbish Campaign).

'We have therefore attempted to do this for them for some countries,' said Tearfund.

'Our methodology has been independently reviewed by Resource Futures and leading academics in the field of solid waste management.'

The report claims that just 14 per cent of plastic packaging is collected for recycling annually, and even in developed countries, recycling capacity often falls short of the total plastic use.

Going back to the football pitch analogy, Tearfund ranked the four countries in terms of the impact their plastic has on those six countries.

Coca-Cola generates 33 football pitches worth of plastic, PepsiCo produces 22 pitches of plastic, Nestle is at 15 pitches and Unilever at 11 pitches. 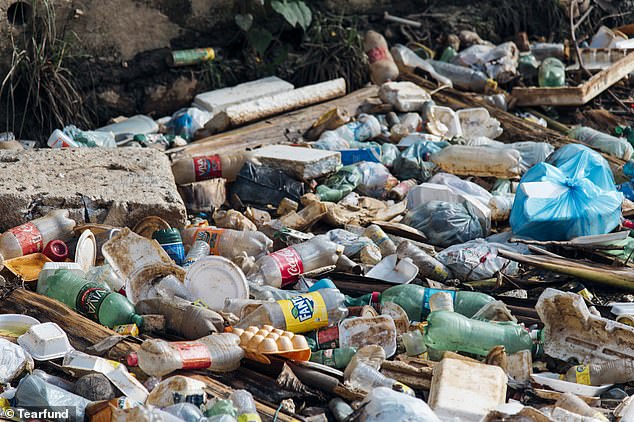 They say they have also reinvented the packaging they use by looking beyond the bottle through reusable platforms like SodaStream.

'We aim to leverage our scale and reach to accelerate systemic change and meaningful progress through collaborative, holistic solutions,' a spokesperson said.

Tearfund says the plastic crisis around the world, while a problem in itself, is contributing significantly to the wider climate crisis.

New academic analysis suggests that the greenhouse gas emissions from the open burning of waste could be highly significant.

'In this report, we present the first estimates of these emissions for each company in our six focus countries,' Tearfund said.

'They give an indication of the scale of the problem. If all developing countries were included, the totals could be significantly higher.' 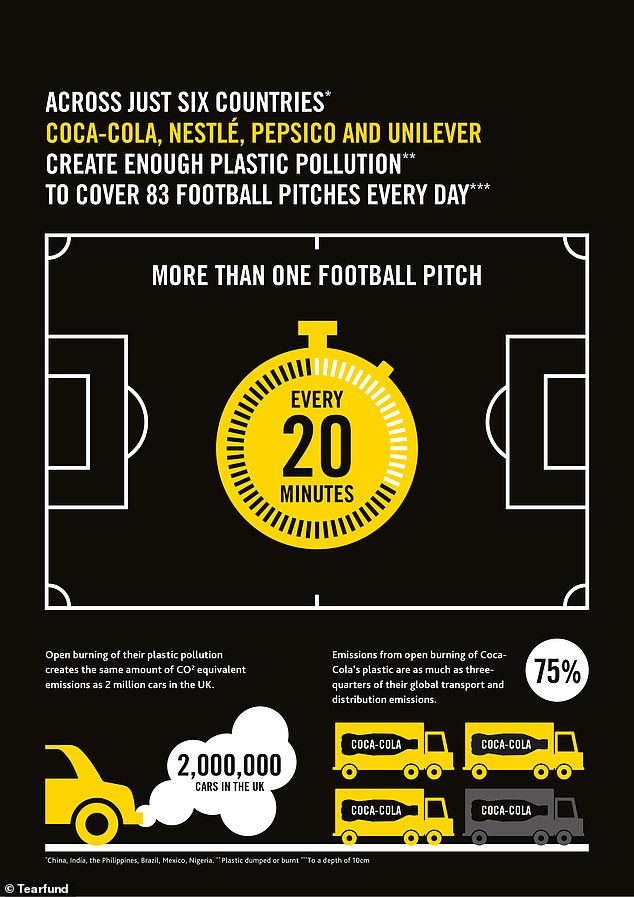 Coca-Cola generates 33 football pitches worth of plastic, PepsiCo produces 22 pitches of plastic, Nestle is at 15 pitches and Unilever at 11 pitches

Coca-Cola has emissions greater than the other three companies combined despite being the smallest of the four in terms of sales revenue.

'It is alarming that Coca-Cola have resisted calls to reduce their dependence on single-use plastic,' the report says.

A Coca-Cola spokesperson, said 'We are absolutely committed to ensuring the packaging in which we serve our products is sustainable and our efforts are focused on continuing to improve the eco-design and innovation of our packaging.

'As part of a number of global commitments, we have committed to getting every bottle back for each one sold by 2030, with the aim to ensure that every plastic bottle contains at least 50% recycled plastic by 2030.'

The company says plastic still has a role to play as a valuable resource which can be used again and again but are focused on removing it where possible.

'As we work towards a circular packaging economy,

PREV Sony sets PlayStation 5 event for June 4 and promises look into 'future of ...
NEXT HBO Max is a mess -- but it's still a smart bet on HBO’s future