A Nazi concentration camp on the island of Alderney has been studied for the first time since its destruction at the end of World War Two to reveal details of the site where Hitler's soldiers conducted heinous acts against prisoners.

Alderney was home to the only concentration camps in Britain during the war and the remains of more than 30 structures have now been revealed by archaeologists using ground-penetrating radar at the most sinister — Sylt.

One of the new finds at the site of the death camp, which was run by the Schutzstaffel (SS) from 1943, was a tunnel from the soldiers' bathhouse, below the barbed wire fence and into a villa outside of the camp.

It connected to the villa of the camp's Commandant  and this well-lit passage is thought to have been regularly used by the German occupiers.

Archaeologists are unsure of its exact purpose but say it may have been used to sneak in women for a brothel.

Other findings include both prisoner and SS buildings — barracks, kitchens, toilets and bathhouses — as well as gateposts and perimeter fence remnants. 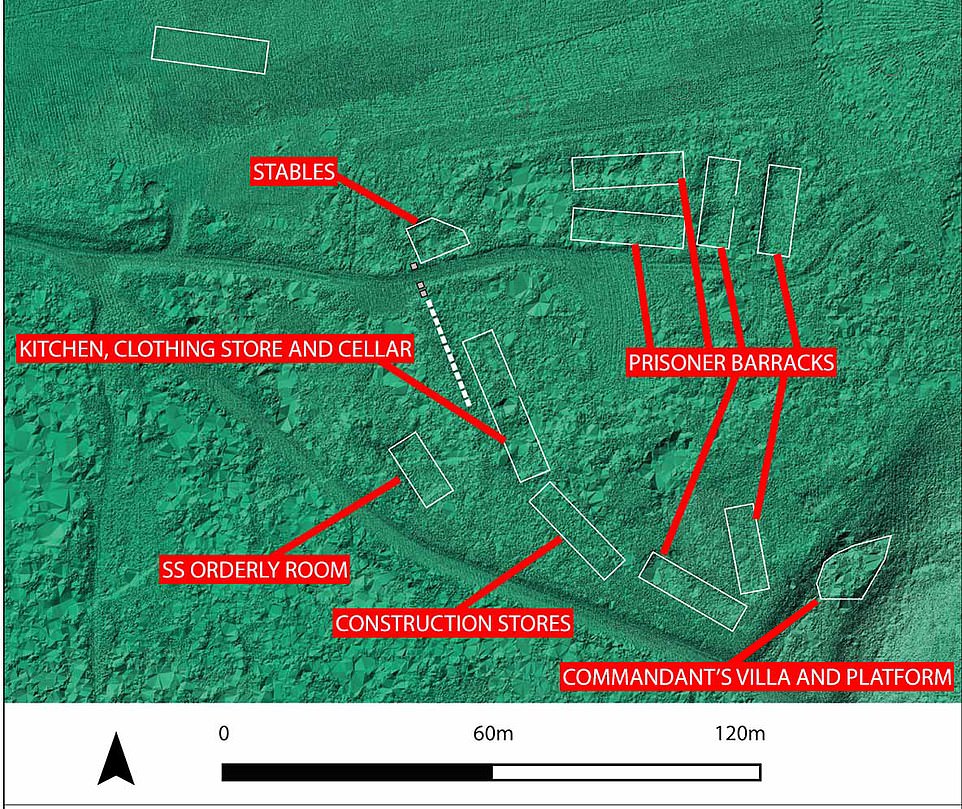 Pictured, the ground-penetrating radar images labelled with some of what was found hidden under the shrubbery on Alderney. This is the first time the camp has been investigated since 1945 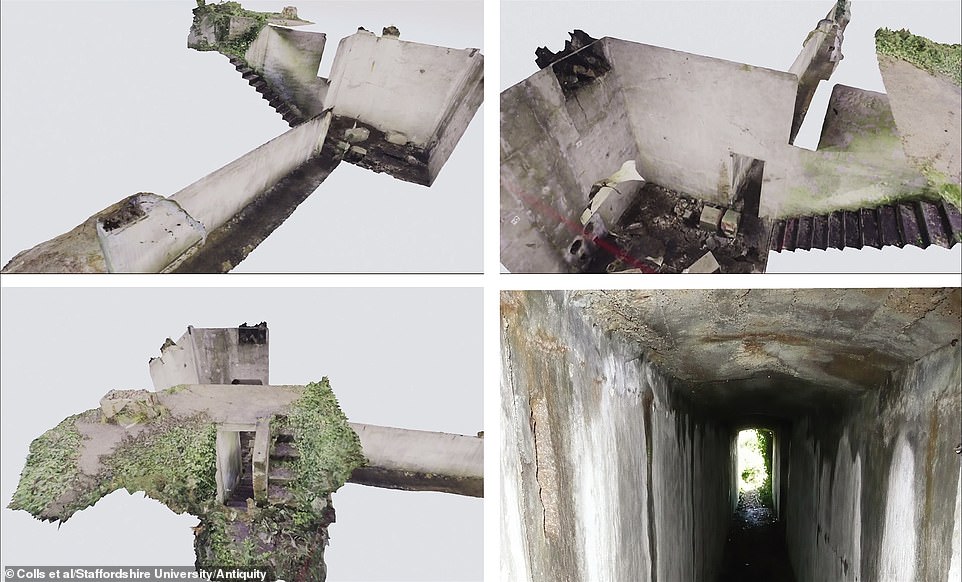 One of the new finds at the site of the death camp, which became a Schutzstaffel (SS) death camp in 1943, was a tunnel from the soldiers' bathhouse, below the barbed wire fence and into a villa outside of the camp. This well-lit passage is thought to have been regularly used by the German occupiers and archaeologists are unsure of its exact purpose, but say it may have been used to sneak in women for a brothel 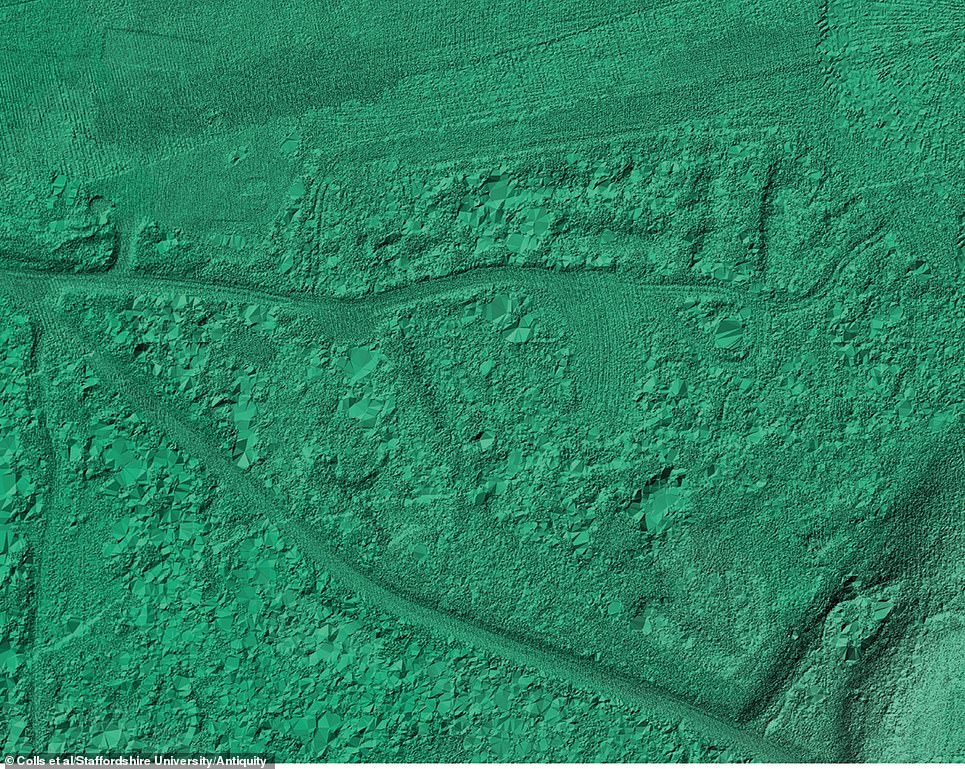 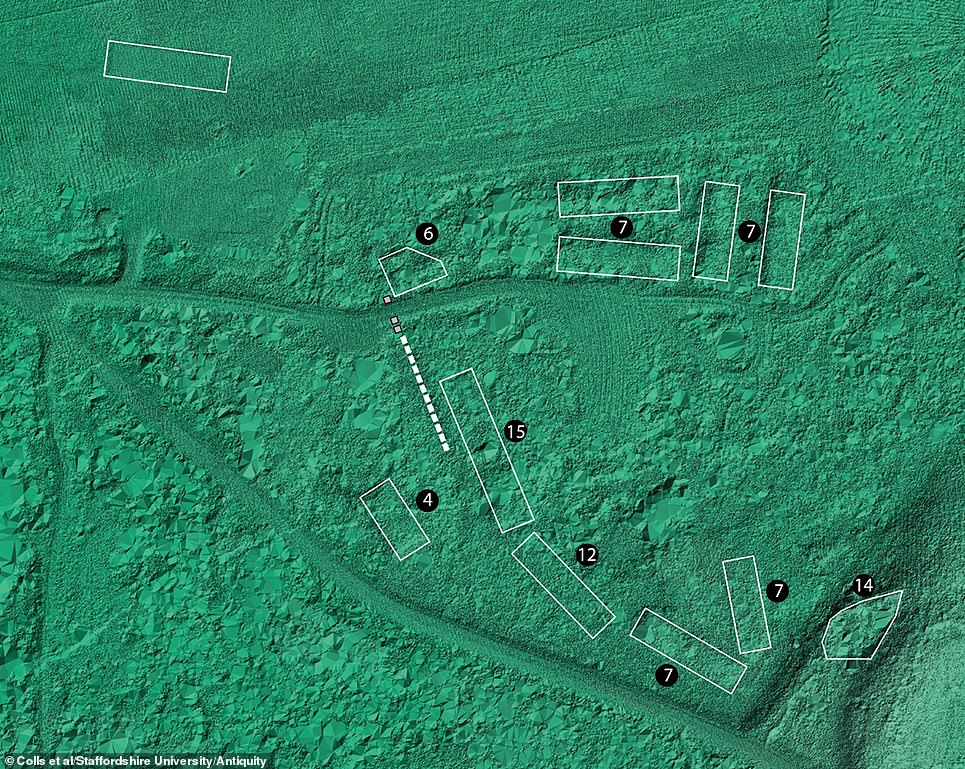 An annotated image showing the different things found by the ground-penetrating radar scans. 4) SS orderly room, 6) stables, 7) prisoner barracks, 12) construction stores, 14) Commandant's villa, 15) kitchen, clothing store and cellar. The white dotted line is the dividing wall between the are for SS troops and the prisoners 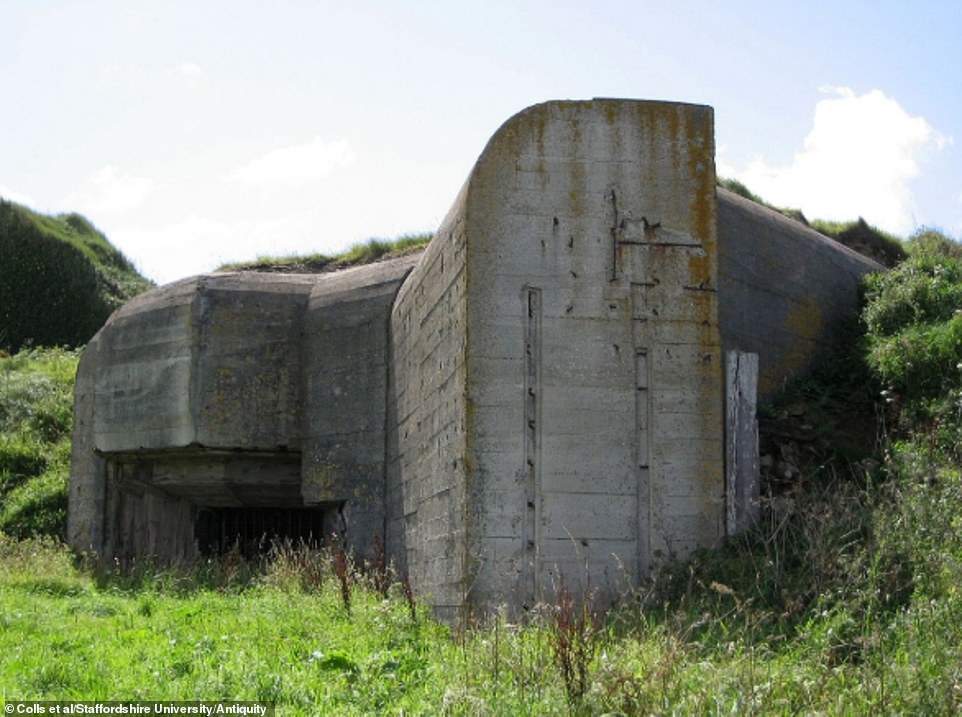 Pictured, a bunker on Alderney, likely built by slave labour from Sylt and the other camps. They were starved, beaten and tortured by the occupying Nazis and forced to toil away erecting part of Hitler's 'Atlantic Wall', designed to protect France from attack. This bunker would have formed part of these defences

A handful of physical structures remain visible today, including a trough for horses and an SS orderly built by slave labour, but the researchers sought to uncover hidden signs of the Nazi era.

The German occupiers destroyed as much evidence of the camp and its monstrosities as they could in 1944 when it was clear the Allied forces would win the war.

The researchers used non-invasive methods and were able to identify and map key features of the camp and show how it expanded from a small forced labour camp of 100 to a fully-fledged Nazi death camp run by SS tyrants.

Thirty two features were discovered in total: four boundaries, five structures for SS soldiers, two for the Commandant himself and 21 built for the prisoners. 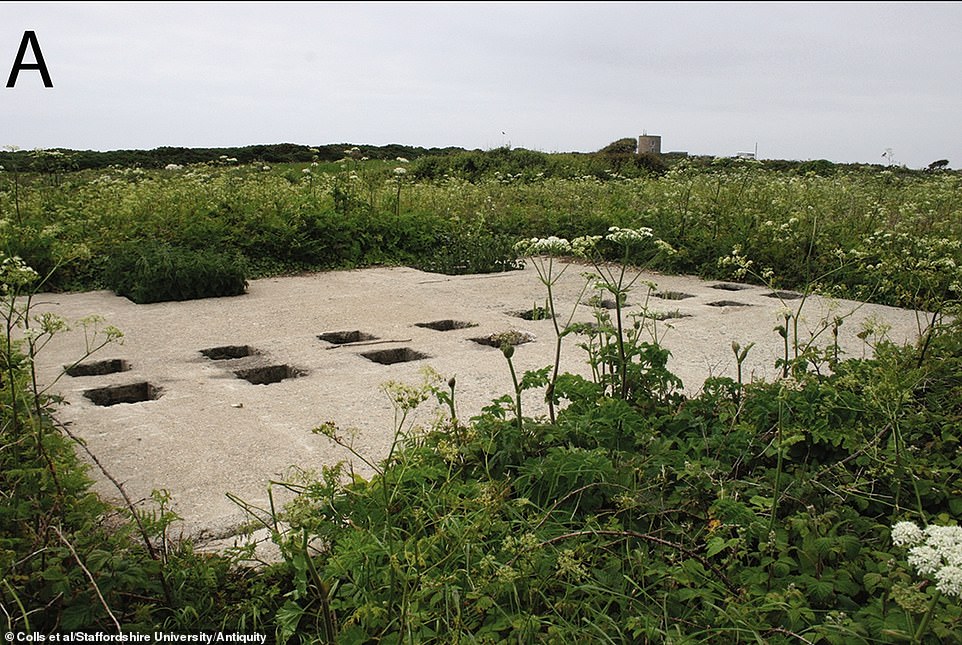 A toilet block (pictured) and bathhouse, stables and kitchen, with accompanying subterranean cellar were among the structures in the prisoner's area 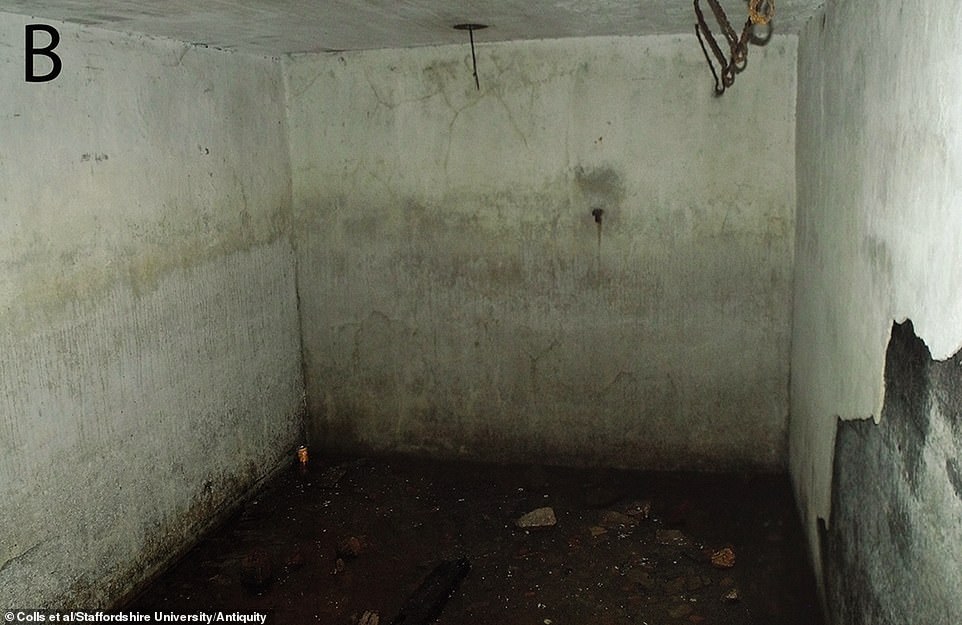 Records from survivors mentions how hard life was for people sent to work at the forced labour camp, which became a concentration camp.

Each prisoner was assigned to a labour company and forced to undertake heavy construction work for 12 hours per day.

They were inadequately dressed and undernourished.

Daily rations consisted of black coffee for breakfast; a thin soup and a loaf of bread between five prisoners for lunch; and a relatively thicker soup with butter for dinner

The Organisation Todt (OT), a civil and military engineering group responsible for supplying labour to the Third Reich, ran the camp for two years.

It passed into the hands of the notorious SS, headed up by the infamous Heinrich Himmler.

They did not administer medical treatment at Sylt: sick prisoners who were able to walk were sometimes permitted to visit the hospital at Norderney.

One-fifth of the camp's inmates reportedly died between August 1942 and January 1943.

If a prisoner died, the SS issued the Sylt doctor with a pre-printed death certificate, which often labelled the cause of death as faulty circulation' or 'heart failure'.

The camp was divided into two separate compounds, one for the prisoners and one for the SS troops, by a stone-covered wall and gateposts.

Sylt, like the rest of the concentration camps across Europe, also had a central square for roll-call.

A toilet block and bathhouse, stables and kitchen, with accompanying subterranean cellar were among the structures in the prisoner's area.

Assessment by the archaeologists revealed the foundations of the site's canteen, guardroom and workshops as well as both the prisoner and SS barracks, the sickbay and the construction office.

Sentry posts, gateposts and the remnants of the camp fences also survive in the underground fingerprint, shown as lines on a radar map.

The researchers, led by academics at Staffordshire University, used lidar and geophysical survey data to reveal what lay beneath the surface.

A digital map was produced and no physical excavations were conducted to preserve the site. The findings were compared to historical blueprints of the camp that survived the war to understand what each structure was.

Only shallow depressions were seen for the prisoner barracks, opposed to the deep foundations of the SS barracks, a clear indicator of the superior quality of the buildings for the soldiers.

Prisoners were housed in wooden barracks, which were destroyed when the Germans tried to destroy all evidence of the camp and its crimes in 1944, which measured 90 feet long by 26 feet wide (28 x 8m).

This space is approximately the same size as half a basketball court and each building housed 150 prisoners.

It is known from archive records that a large portion of this space was reserved for a single room which was taken by a single prisoner called a Kapo — prisoners chosen by the SS to keep order and enforce discipline.

Of the remaining space, each prisoner had just 1.5 square metres each in which to sleep and live, barely more than a phone booth.

Pictured is a 2D schematic of what the Sylt camp would have looked like in 1942. A handful of buildings existed at this time, with some still under construction 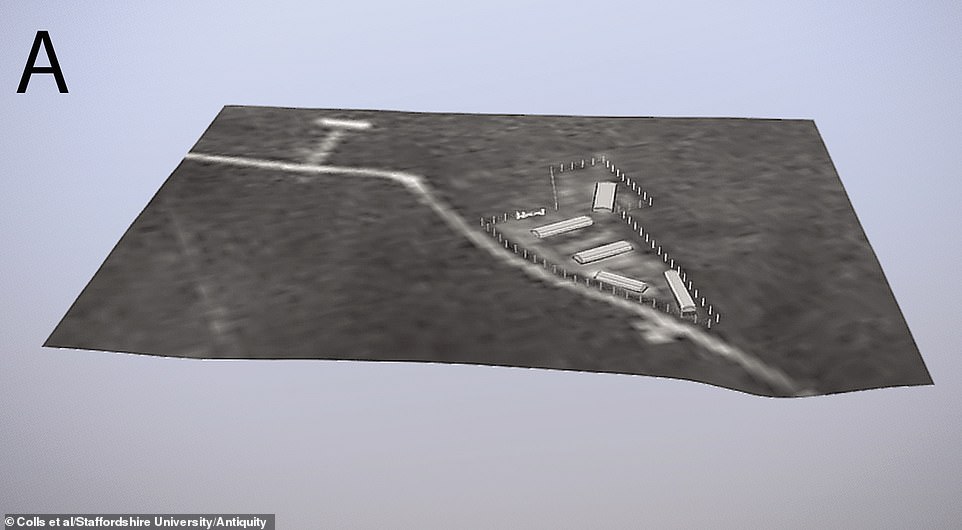 Pictured, a digital reconstruction based on the latest findings showing what Sylt would have looked like in 1942 when it was first established as a forced labour camp run by the Organisation Todt (OT), a civil and military engineering group responsible for supplying labour to the Third Reich, ran the camps

A 2D view of the Sylt camp in 1943, shortly before it is handed over to the SS to become a concentration camp. The radar images reveal it grew rapidly and expanded with more buildings for both solders and prisoners 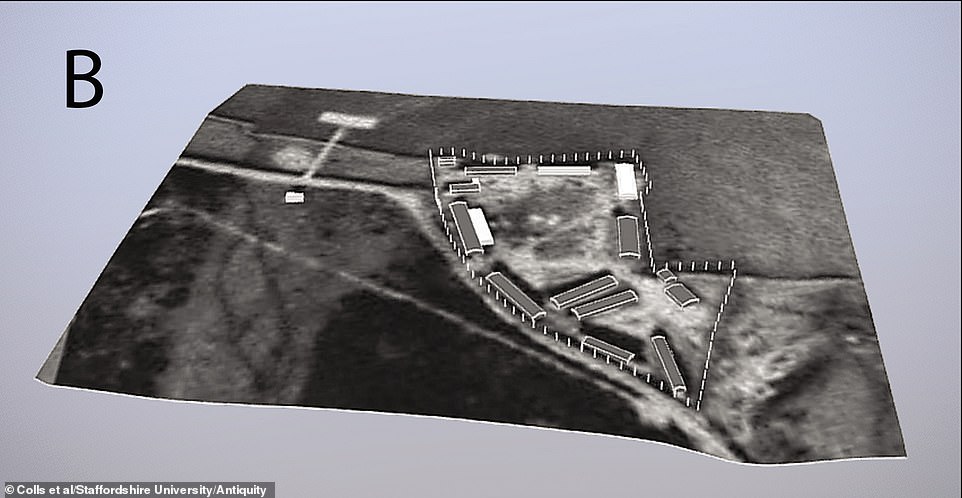 Pictured, a 3D look at the Sylt camp in 1943. On March 1 it was given to SS-Untersturmführer Maximillian List to run and he became Commandant 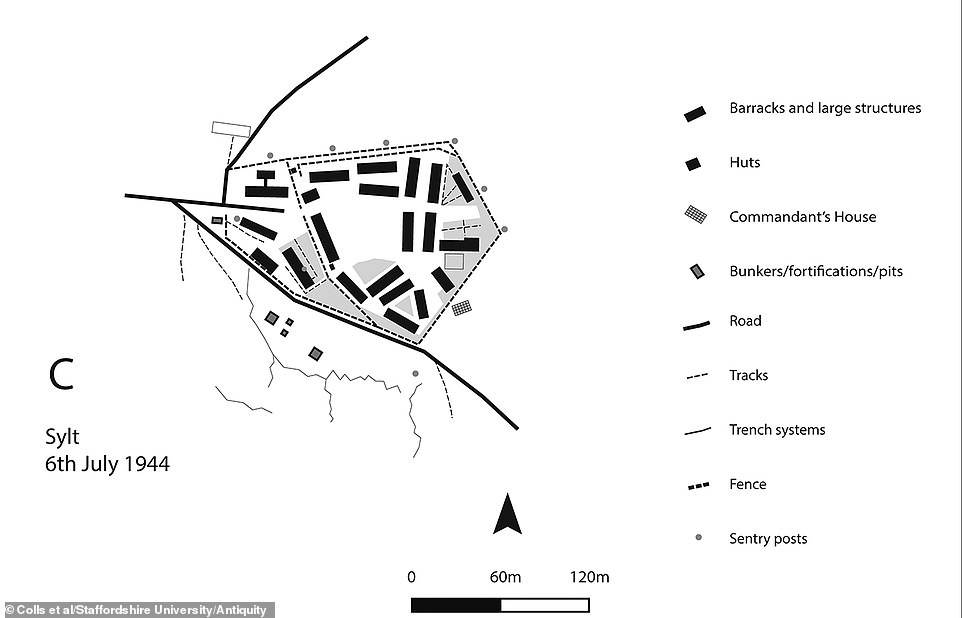 Pictured, the final size and structure of the Sylt concentration camp which features more than 1,000 SS prisoners, who all wore the  notorious blue and white stripped overalls 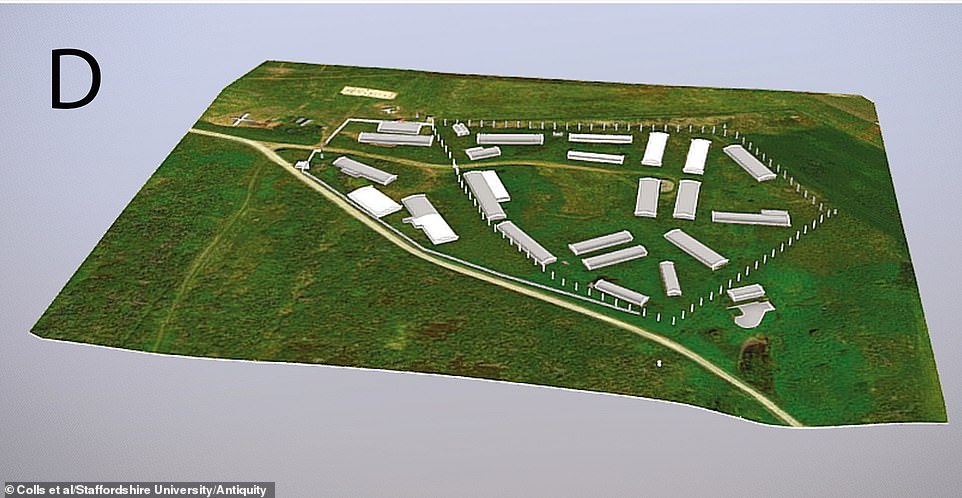 The German occupiers destroyed as much evidence of the camp and its monstrosities as they could in 1944 when it was clear the Allied forces would win the war. By using non-invasive methods the researchers were able to identify and map key features of the camp and show how it expanded to become a Nazi death camp run by SS tyrants without destroying the area 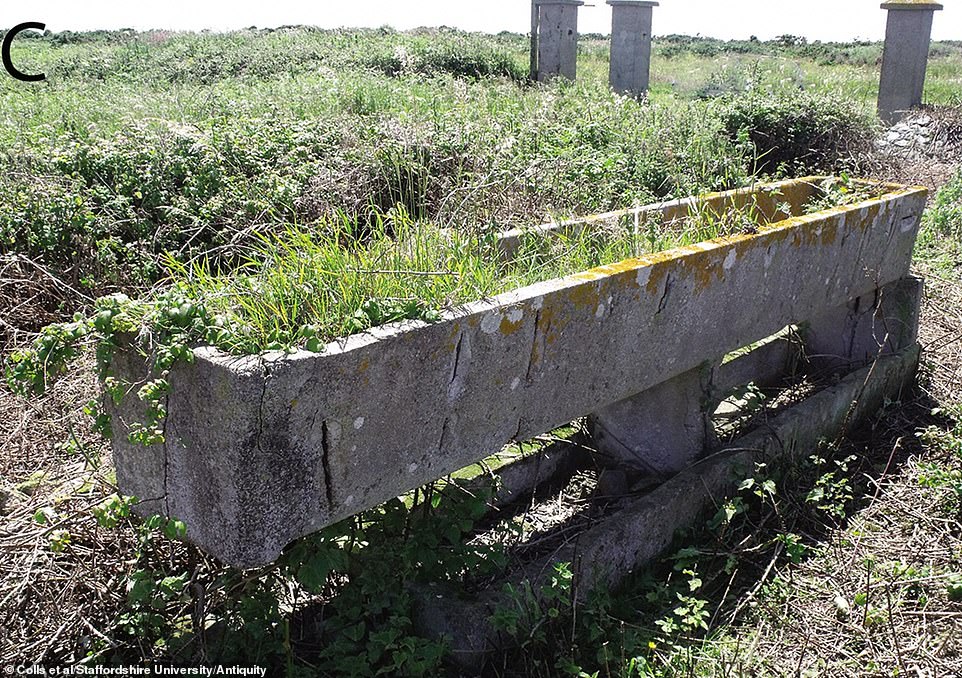 Pictured, the visible remains of a stable block from Sylt on Alderney. In a local committee meeting to discuss Sylt's inclusion in the Register of Historic Buildings and Ancient Monuments a member said: 'If there were buildings or something there worth conserving, I might have a different opinion [to not wanting it preserved]; but there is nothing, apart from a broken old wash trough [...] and a load of brambles' 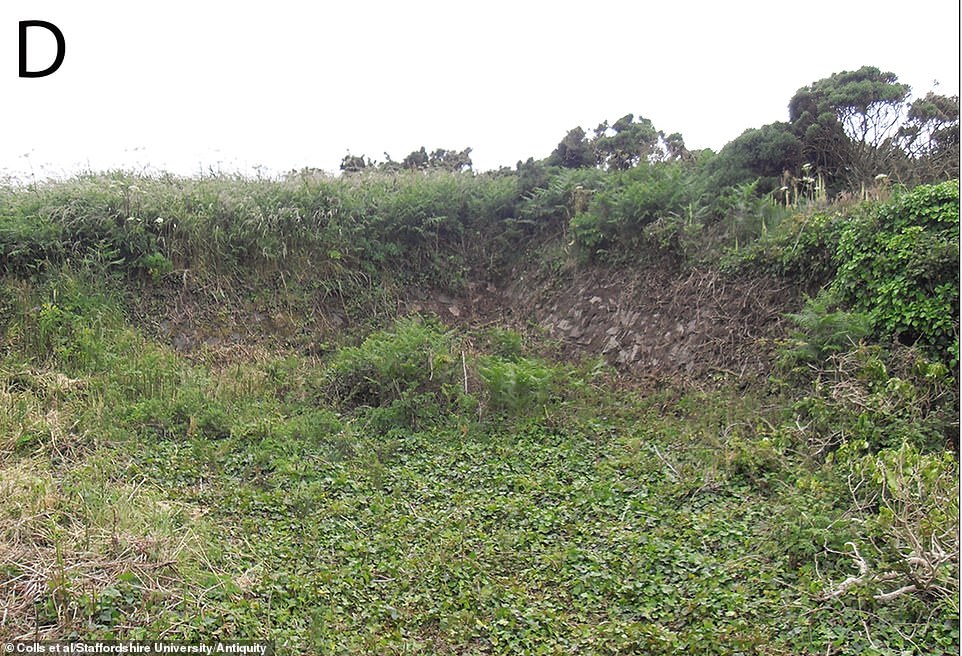 Pictured, the remaining site of the SS orderly room. The SS buildings have been more easily identifiable as they were build to a higher standard than the ramshackle buildings that housed the prisoners 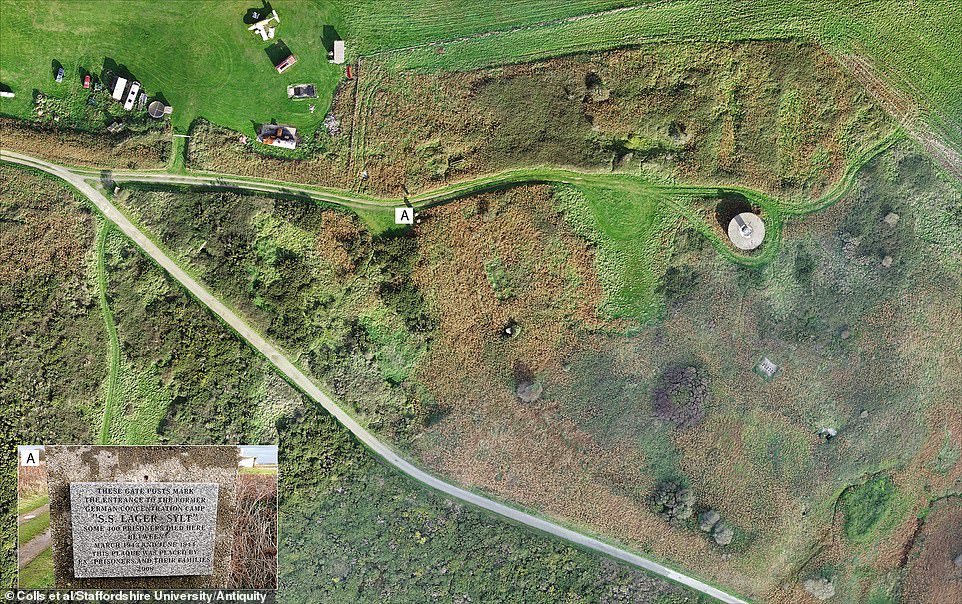 Pictured, overhead drone footage of the Sylt site from 2017. Inset, a picture showing the memorial plaque installed by a Sylt survivor in 2008 on the gate posts. Witnesses from the war say the front gate of the camp had a sign over it displayed the words 'SS-Lager Sylt'

'This work has shed new light on the German occupation of Alderney and, crucially, the experiences of the thousands of forced and slave labourers who were sent there,' said Professor Sturdy Colls, who led the study, published today in the journal Antiquity.

'Historical, forensic and archaeological approaches have finally offered the possibility to uncover new evidence and give a voice to those who suffered and died on Alderney so many years ago'.

Nazis occupied the Channel islands in 1940 after the British decided it would be too expensive and difficult to protect the during the war. Instead, the residents were evacuated to the mainland.

Almost of of Alderney's population fled, allowing the invading Nazis to claim the island unopposed, much to the chagrin of British Prime Minister Winston Churchill, and turn the five-and-a-half square miles of Alderney into a cut-off German enclave.

They had a free hand to do what they wanted there without fear of surveillance or interference. And they exploited that freedom without restraint.

Over the next five years, Organisation Todt (OT), the monolithic enterprise that ran Nazi construction projects, hired some voluntary labour from Germany and France but mainly shipped in slaves — thousands upon thousands of Russian prisoners of war and forced labourers, men and boys dragged from their villages in Russia and Eastern Europe, Jews from France, French and Spanish PoWs and even captives from Morocco.

During the occupation of the islands, slave labourers made up at least three-quarters of the work force on the island.

THE MONSTROUS REPUTATION OF SYLT

Sylt had a reputation as by far the most fearsome camp on Alderney, with archived testimonies speaking of untold

PREV Medieval cemetery discovered under a Berlin car park reveals its original ...
NEXT Residents of a remote island in Belize will use a machine to harvest drinking ...

Fans are remembering Guthrum from #Vikings