Flowers have an innate ability to bounce back after injury from falling branches or being trampled underfoot, according to a new study.

Ecologists looked at a random sample of 23 native and cultivated flowers species in Australia, South America, North America and the UK.

They performed a 'non-lethal' reorientation of the species in the wild and returned at various times to document their recovery.

Plants after injury were seen to bend and twist to ensure their leaves were again facing the Sun for photosynthesis.

Even the most injured flowers could move back into the best position to ensure successful reproduction between 10 to 48 hours later, they found.

Flowers' sexual organs and nectar tubes need to be perfectly aligned and undamaged to be pollinated by a visiting insect, which is crucial for their reproduction.

The study also shows that symmetrical flowers like orchids and sweet peas are better at recovering from injury than star-shaped ones like petunias and buttercups.

Time lapse showing reorientation of rosebay willowherb flower (Chamerion angustifolium) at time of injury, then plus 5 hours, and plus 24 hours. In the first image, the flower has been knocked 90 degrees out of alignment by research team. After five hours,  the flower’s style (the long stalk that connects the stigma and the ovary) has moved . After more than 24 hours,  the style (but not petals) are now in correct position and the stigma (the sticky platform at the end of the style where pollen is deposited) is open and receptive

‘Mechanical accidents happen to plants fairly often and can, in some cases, stop the plant from being able to attract pollinating insects and so, make seeds,’ said Professor of Ecology and Evolution Scott Armbruster at the University of Portsmouth.

‘Making seeds and propagating is a flower’s main purpose, so injuries which threaten that pose a huge problem.’

‘This little-known aspect of plant evolution is fascinating and tells us much more than we previously knew about how plants behaviourally adapt to changes in their environment, including mechanical accidents.’

The researchers found that some plants are better at recovering from their injury than others, such as the snapdragon, orchid and sweet pea.

These bilaterally symmetrical flowers – those in which the left and right sides mirror each other – can almost always restore their original orientation. 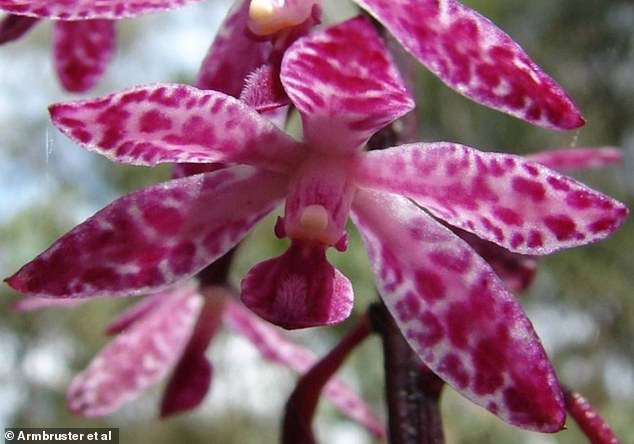