Impressionable young birds pick up style tips from their elders just like humans and 'feather their nests' with coloured materials they associate with older trendsetters.

Experts set out to see if birds might prefer to build nests of the same colour as the one they hatched in, or whether juvenile experiences were more important.

They found that finches who spent time around both an adult and nest material of a given colour as juveniles went on to prefer that colour material for their first nests.

This held true even if that material was of a different colour to the nest in which they had hatched — suggesting that the birds forge key associations as juveniles.

However, birds that did not have access to materials as a youth or did not spend time around an adult did not develop the same preference — and built nests slower. 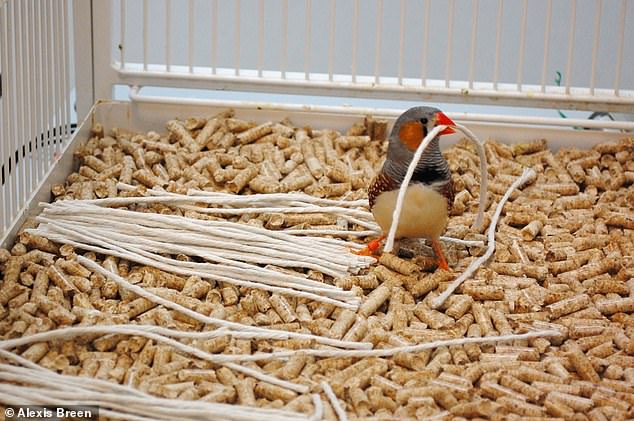 'Which environmental "ingredients" are needed, and when, for animals to acquire technological know-how is a major outstanding question,' said paper author and biologist Alexis Breen of the University of St Andrews.

'Establishing links between the early-life environment and one of the most widespread forms of animal material technology — nest-building in birds — was therefore very exciting.'

To study these links, the researchers carefully controlled the environment of developing zebra finches.

They had different birds hatch in a nest of one unnatural colour and subsequently — once they had grown and left the nest — each juvenile bird was 'buddied up' with another of a similar age.

Some of the juvenile pairs were then allowed to spend time around a nesting material of a different unnatural colour to the nest that they had hatched in, while some were not.

At the same time, some of the pairs were allowed to spend time with an unrelated adult zebra finch, while — again — others did not. When together, the adult birds would poke and prod the material (if present), although they did not build nests.

Finally, when the juveniles had matured fully, they were allowed to build their very own nests and were given a choice of three materials.

These included materials of a natural colour, of the colour of the nest they hatched in and, finally, of the colour they may or may not have been exposed to when young.

'By manipulating their juvenile socio-ecological environment, we could test if, as a consequence, zebra finches built their first nest differently,' said paper author and biologist Lauren Guillette of the Universities of St Andrews and Alberta.

Britons WILL be able to fly to Greece this summer after the UK was initially ...