The US Air Force and Space Force have kept a tight lid on their mysterious space plane, but a military official has shared the craft’s agenda with the public for the first time ahead of its orbital flight this month.

The X-37B is set to take off from Cape Canaveral Air Force Station in Florida, riding atop a liquid fueled Atlas V rocket on May 16 carrying a range of payloads for three different experiments.

The tests include converting the sun’s power into radio frequency microwave energy that can be transmitted to Earth and power different facilities, including military posts.

Along with harnessing power from the sun, the plane is also set to evaluate the reaction of materials in space and the effect of radiation on seeds for NASA. 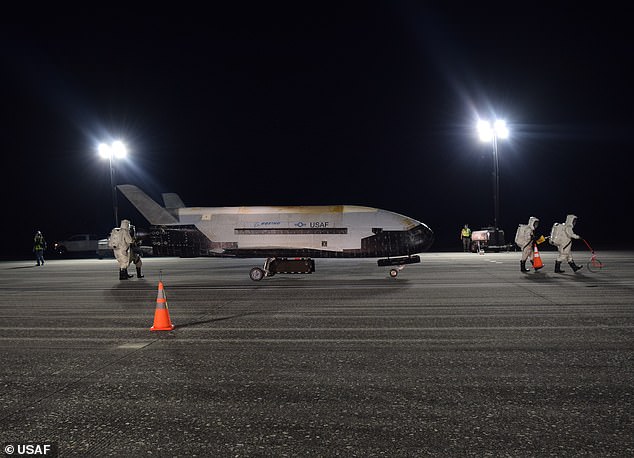 The US Air Force and Space Force have kept a tight lid on their mysterious space plane, but a military official has shared the craft’s agenda with the public for the first time ahead of its orbital flight this month (pictured is the craft returning home from its 2019 mission)

This pilotless craft has been performing a range of classified missions for the military group since 2010, allowing the group to test new technologies in space.

This month’s launch will mark the sixth mission of X-37B, which is also set to spend more than two years in space.

The mission, dubbed OTV-6, is set to take off from Cape Canaveral Air Force Station in Florida.

Air Force Secretary Barbara Barrett said during a webcast hosted by the Space Foundation: ‘The Air Force's Rapid Capability Office has combined forces with the Air Force Reserve Research Lab and now the US Space Force to execute a mission that maximizes the X-37B's unique capabilities.’ 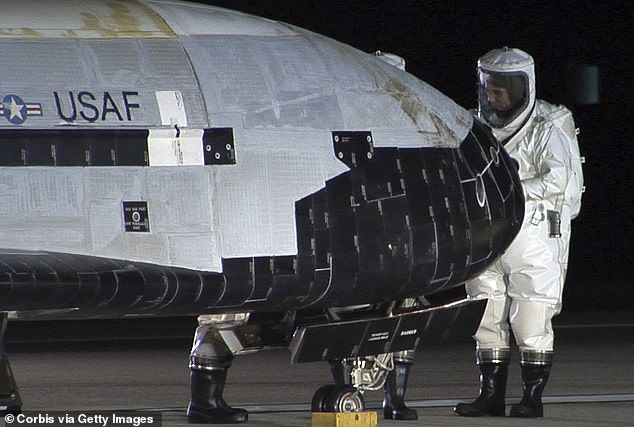 ‘This important mission will host more experiments than any prior X-37B flight, including two NASA experiments.’

‘One is a sample plate evaluating the reaction of select significant materials to the conditions in space.’

‘The second studies the effect of ambient space radiation on seeds.’

The sample plate evaluation and seed experiments will gather data specifically for NASA, while converting the sun into microwave energy will be used to power military posts, as reported on by Business Insider.

Although the Air Force owns the X-37B, the newly formed Space Force is responsible for launching, operating and landing the craft.

The Air Force has two X-37Bs that are swapped while one is undergoing refurbishment.

Powered by solar cells with lithium-ion batteries, the plane was orbiting at around 200 miles high.

The first mission in