A new ‘origami-inspired’ foldable shelter designed for the next generation of moon explorers is about to undergo testing in the harsh conditions of Greenland.

The ‘Lunark’ shelter, created by two Danish ‘space architects’, is a compact habitat that folds down to a manageable size to allow easy transportation before being extended in its final location.

The battery-powered, two-person home consists of a strong aluminium frame as its exterior, which is covered in solar cells to maximise energy generation for the inhabitants.

The comfortable interior of the module comes complete with a bathroom, living quarters with desks and shelving and an on-board 3D-printer to produce new parts

The two designers of the module, Sebastian Aristotelis and Karl-Johan Sørensen, will be living inside Lunark in northern Greenland for three months staring this autumn. 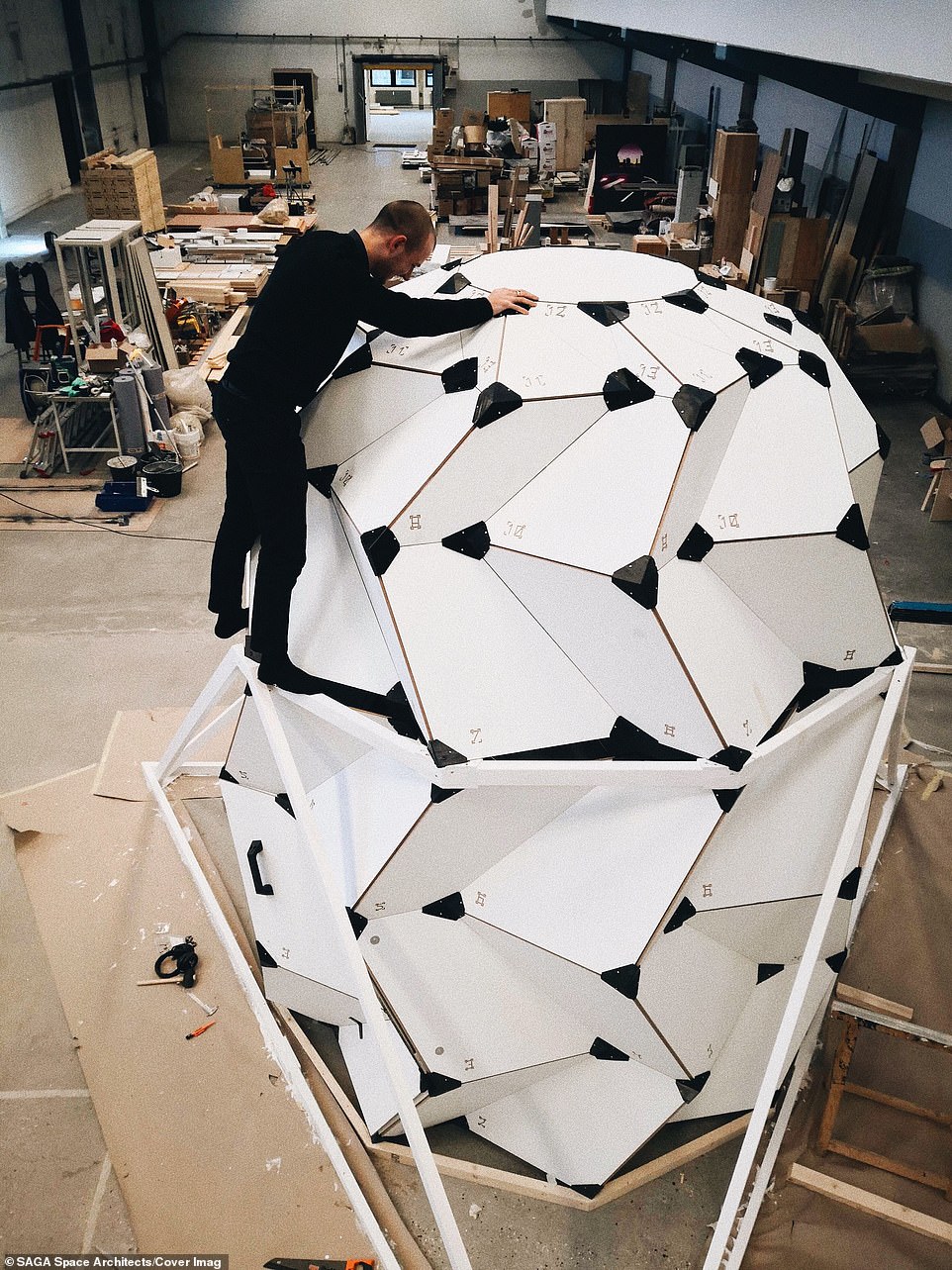 This origami-inspired moon home is set to be tested later this year. The Lunark is a compact habitat designed to fold down to a size that allows easy transportation. here, a full-scale mock-up of the habitat used to experiment with different interior configurations 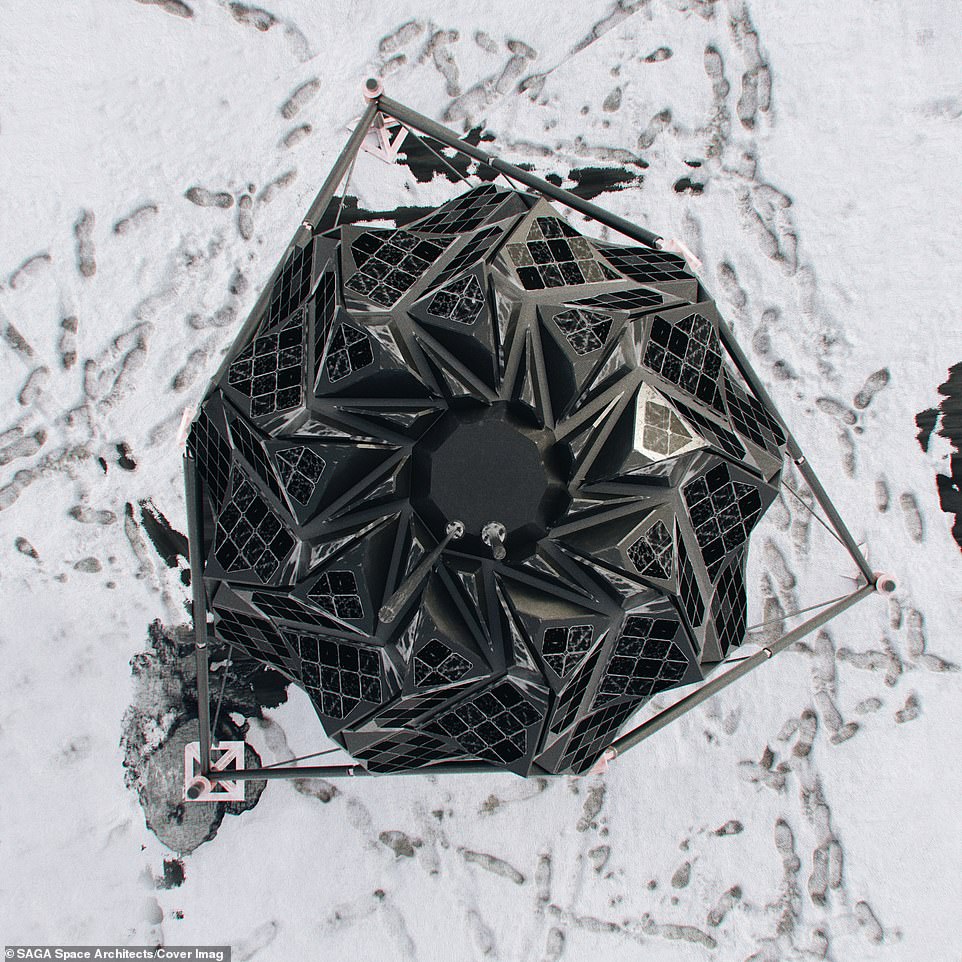 Lunark will be put to the test against Greenland’s hurricane winds and -22 degree Fahrenheit conditions, which will replicate the barren and freezing conditions on the moon.

The team’s ultimate mission is to make life in space liveable with their origami-inspired temporary home and help inform moon habitat designs, including NASA’s upcoming Artemis mission in 2024.

‘By combining the ancient Japanese art of paper folding with the method of biomimicry we have come to a lightweight and strong foldable structure,’ the Lunark project says on its website.

‘The final hinge design is a compliant mechanism it’s lightweight, strong, airtight, simple to manufacture and to maintain.

'With thousands of hours spent designing, researching, and prototyping, we are now ready to build our Lunark habitat – a simulated Moon habitat for research, with the aim that it one day can sustain life on the moon.' 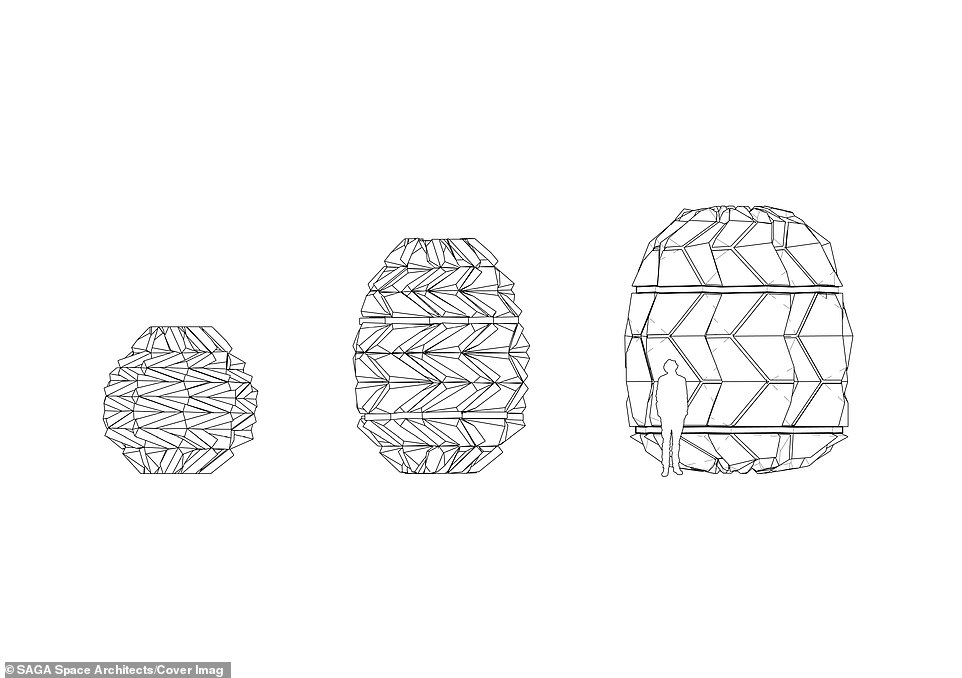 Three-stage folding process demonstrated in design sketches. By using the ancient Japanese art of paper folding, the designers say they have created a lightweight and strong foldable structure 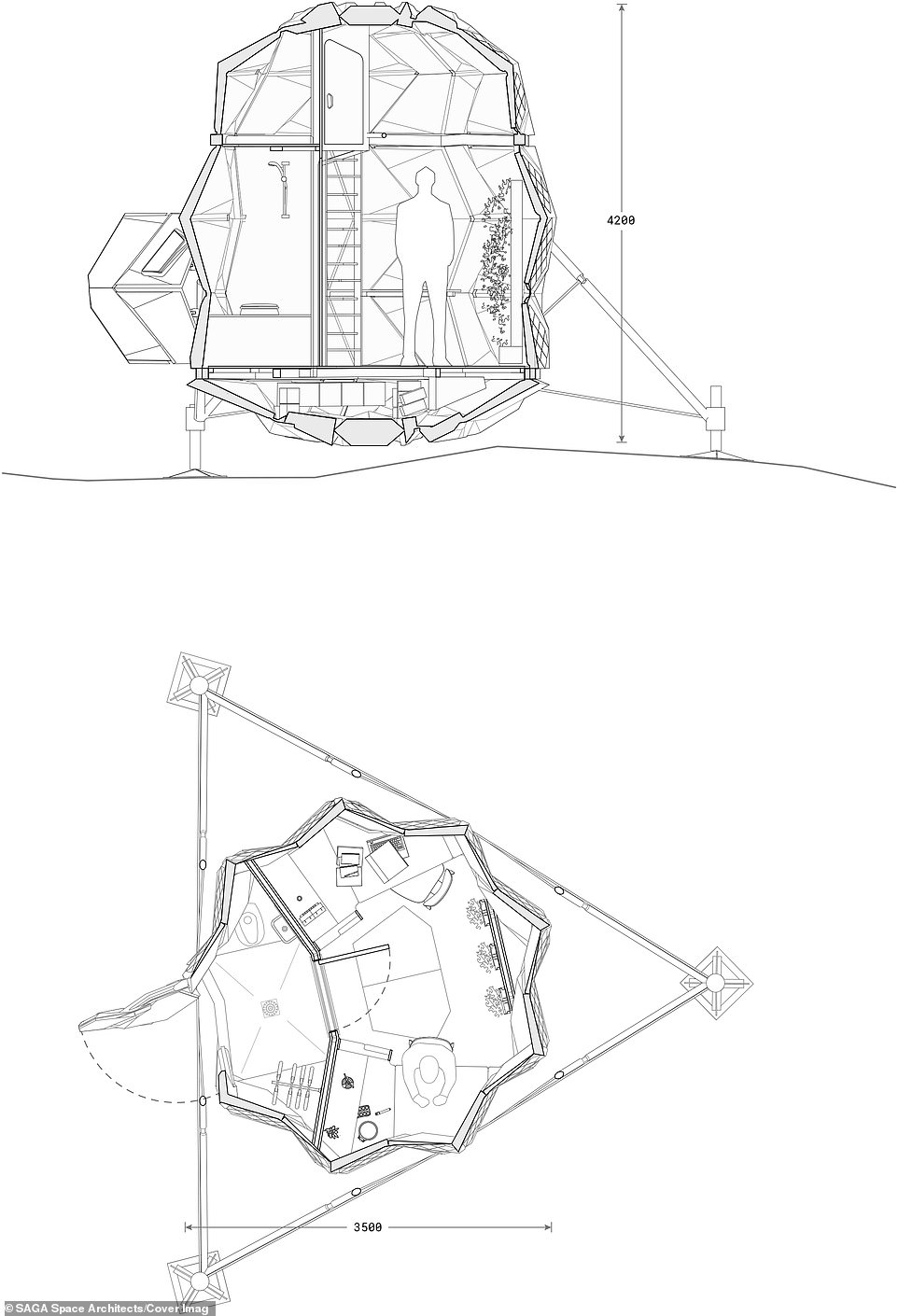 Bird's eye view of the design shows space for working, including two desks, a toilet and a small shower. The habitat is designed to land on-site equipped with everything in its core, including furniture, food, water and other resources

The habitat is designed to land on-site equipped with everything in its core – even food and water – when it deploys, locking its rigid aluminium frame ready for the crew to move in.

The duo have turned to Kickstarter to raise funds for the project and build a full-scale version of Lunark before their scheduled expedition date later in the year.

‘We will live in complete solitude, cut off from the rest of the world, to test the architecture, ourselves, and technologies for future Moon missions,’ they say. 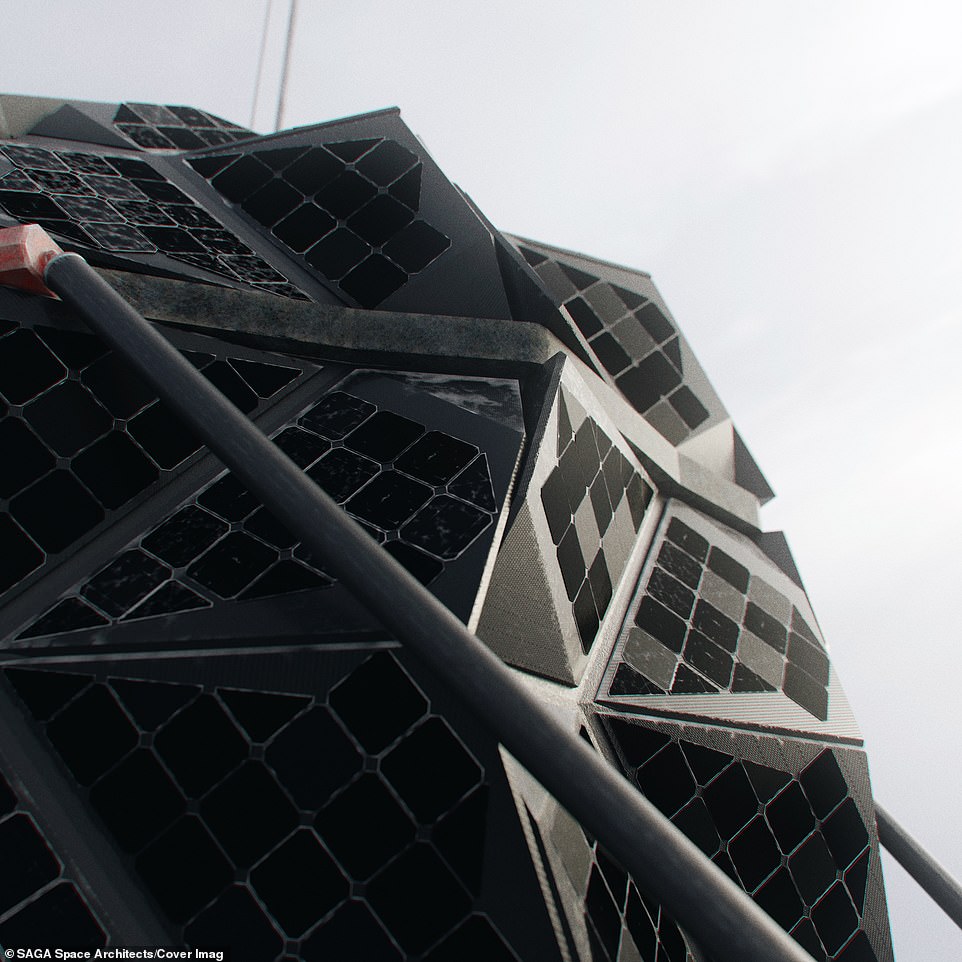 The exterior of the Lunark cabin consists of 328 individual panels, connected by an airtight flexible seam, which contribute to its resilience 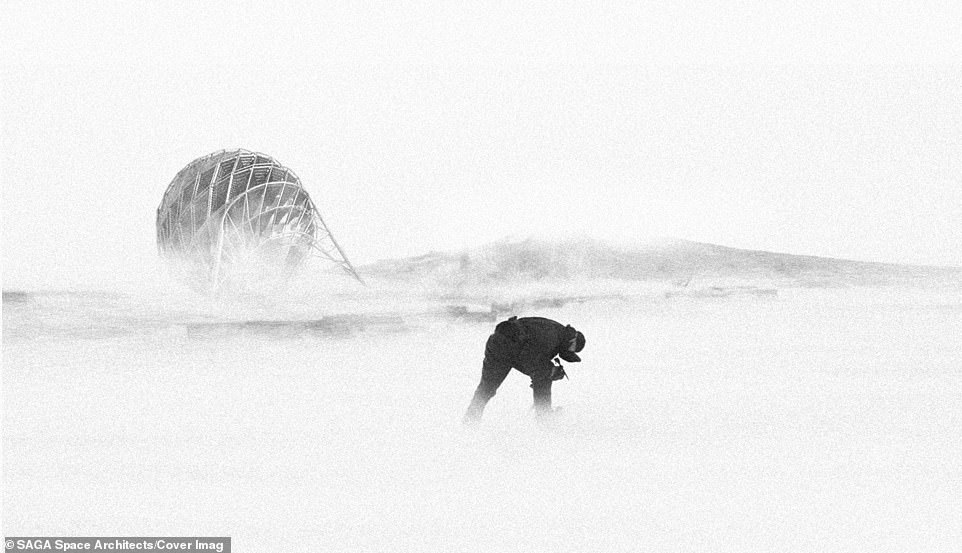 ‘Arctic Greenland is one of the most Moon-like places on Earth – a strange desolate white planet.

‘By going there we don't have to pretend. It will feel real.’

The 1,700kg foldable home, which can expand from an impressive 102 cubic foot to 607 cubic foot, can withstand temperatures as low as -49 degrees Fahrenheit and wind speeds of 55 miles an hour.

As the inhabitants won’t be able to leave the windowless cabin in unforgiving Arctic temperatures, a lighting system in the ceiling slowly changes in hue and luminosity over the day to replicate natural light and maintain a circadian rhythm. 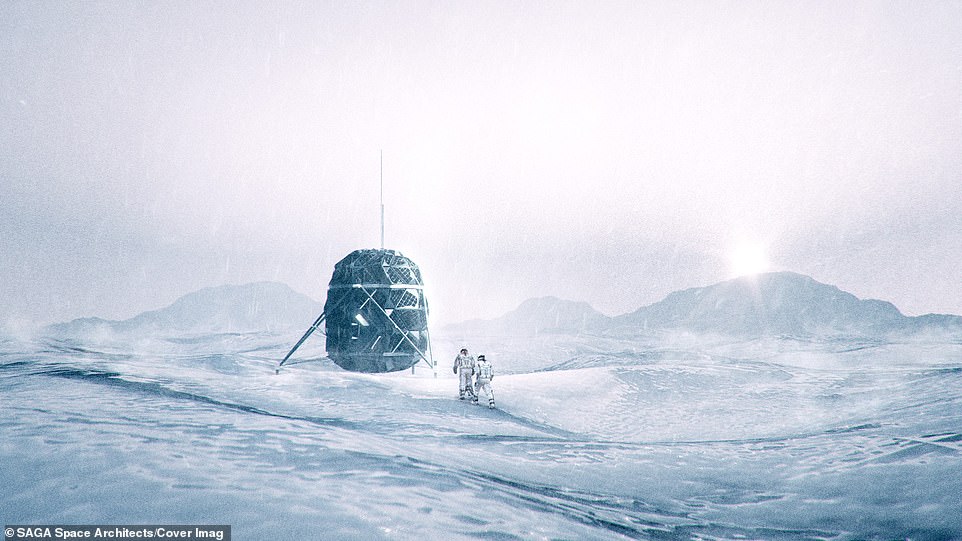