The sun is blazing more than 93 million miles from Earth, but new images provide an up-close look of intricate structures as small as 30 miles across on its fiery surface.

These are the highest resolution images a European telescope has observed, which the team attributes to new optics capable of probing the massive star's magnetic fields, convection, solar eruptions and sunspots with great detail – unlike ever before.

The photographs show solar magnetic fields taken at a wavelength 516 nanometers and sunspots at 430 nanometers, which astronomers say it is 'as if one saw a needle on a soccer field perfectly sharp from a distance of one kilometer.' 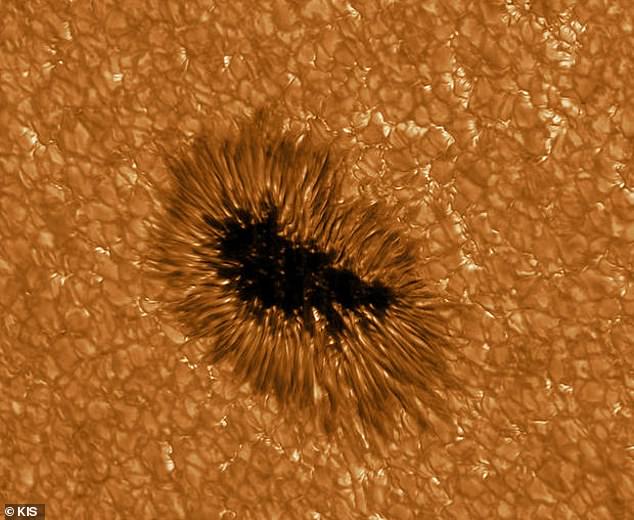 Using the largest telescope in Europe, known as GREGOR, scientists captured stunning details of sunspot evolution and complex design of solar plasma. Pictured is a A sunspot observed in high resolution by the GREGOR telescope at the wavelength 430 nm

Our star is covered in numerous cell-like structures — each the size of the US state of Texas — that are the product of the violent convection motions that transport heat up from deep within the Sun's interior.

In each, hot plasma rises up in the bright center of the cell before cooling off and sinking back into the star to form dark lanes that can be seen by GREGOR – some have compared it to the look of popcorn.

Dr. Lucia Kleint, who led the project and the German solar telescopes

PREV Experts find some male butterflies force a 'chastity belt' on females to stop ...
NEXT Amazon gets FAA approval to test US Prime Air delivery drones

#BREAKING: A man has reportedly died after being shot by police in ...