Sharks were thought to have evolved with a cartilage-based skeleton before other types of fish formed a boney structure, but a new discovery turns that on its head.

An ancient 'armoured fish' skull found in Mongolio has changed the way scientists think about shark skeletons - suggesting they may have evolved from bony fish.

The discovery of the 410-million-year-old fish fossil suggests the lighter skeletons of sharks may have evolved from bony ancestors, rather than the other way around.

Experts from Imperial College London have been studying the remains of the foot long creature that is an ancient cousin of the whale shark and great white.

Named Minjinia turgenensis, the bizarre creature was a member of the placoderm family and had bony plates over its head and shoulders that acted as shields. 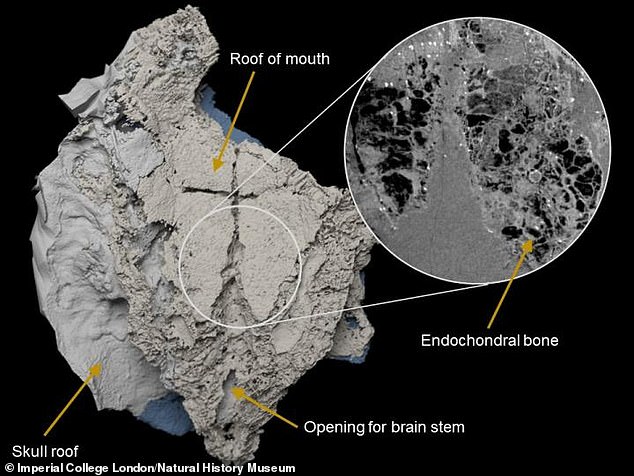 Minjinia's fossilised skull - dug up in the foothills of spectacular snow capped mountains of Mongolia - changes our understanding of shark evolution.

The newly discovered Minjinia is a placoderm, a type of armoured fish dating back over 300 million years.

Their head and thorax were covered by armoured plates with the rest of their body scaled or naked depending on the species.

They were among the first jawed fish - with jaws evolving from gill arches.

Minjinia was one of the first examples of a bony fish, changing the history of fish evolution - as it was thought cartilage-based fish evolved first.

Placoderms died out in an mysterious mass extinction event 359 million years ago that could have been the result of a supernova explosion.

The Imperial team say the discover proves sharks evolved from creatures that had skeletons made of bone - rather than cartilage skeletons existing before bone.

Lead author Dr Martin Brazeau, of Imperial College London, said: 'We currently only have part of the skull roof and braincase - but it was covered in a thick bony armour.

'We know from its relationships to other similar fishes from this time it would likely have had an extensive armour on the face and shoulder.'

Whale sharks, the world's biggest fish, can reach over 60 feet. The Great White, the largest predatory fish, grow to more than 20 feet.

Minjinia belonged to a group called the placoderms. They were the first jawed fish out of which sharks and other vertebrates - including humans - evolved.

Some turned into 30 foot sea monsters with the articulated plates on their skulls evolving to perform the function of teeth. The rest of the body was scaled or naked.

Dr Brazeau said: 'So, it would superficially have looked like other placoderms.'

'Indeed, we have found fragments of armour with a similar pattern of ornamentation to the skull roof in the same rock bed.

'These suggest there would have been bony spines sitting in front of the fins, acting as either a cutwater or a defence. However, we don't yet have a full or partial skeleton. 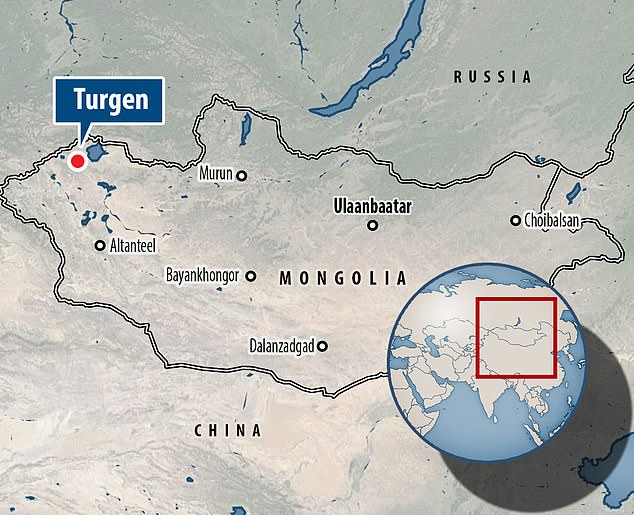 'Like the vast majority of fishes from this time, it was likely predatory - but it's not yet possible to say exactly what it ate without the direct preservation of the jaws.'

Today, sharks' skeletons are made of cartilage - which is around half the density of bone. It was thought to be the original template before the heavier alternative.

Minjinia completely contradicts this, according to the Imperial team.

It was a long held-view that cartilage came first - sharks were believed to have split from other animals prior to the arrival of bone.