WhatsApp messages that crash recipients' phones instantly and forces them to delete and reinstall the app have reportedly been doing the rounds.

When opened, the messages, which contain a long string of unfamiliar numbers and characters, cause WhatsApp to freeze.

The issue is caused by a software bug that prevents WhatsApp from processing the combination of characters in the messages, leading to an 'infinite crash'.

This has resulted in some WhatsApp users who had not recently backed up their conversations losing their entire chat histories permanently.

Independent WhatsApp experts WABetaInfo were alerted of the issue by a user on Twitter and detailed the problem in a blog post.

The weird code and character combinations reportedly originated in Brazil, where it was becoming a particular problem for users.

The issue only affected devices that use iOS and Android devices were not affected, according to WhatsApp. 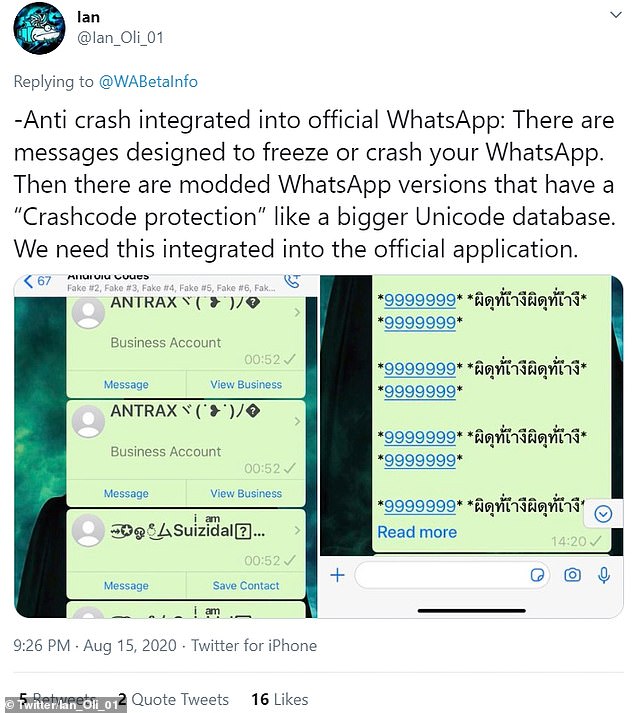 'The combination of these characters create a situation where WhatsApp isn’t able to process the message, determining an infinite crash,' said WABetaInfo.

'If you find any dangerous message, do not send it just for fun – your friends might lose their chat history if they haven’t a recent backup,' it warned.

WhatsApp told MailOnline that the issue has now been resolved.

'WhatsApp has released and already begun rolling out a patch that addresses this in its latest iOS software update,' it said in a statement to MailOnline.

HOW TO PROTECT AGAINST THE BUG

Go to Settings indicated by the three vertical dots in the top right.

Select either 'My contacts' or My contacts except...' and press 'DONE'.

This prevents other unknown contacts adding you to groups, sending a scary message.

'As with any tech product, we strongly encourage users to keep their WhatsApp app and mobile operating system up to date and download updates whenever they’re available.'

The bug was detailed thoroughly by WABetaInfo.

The blog explains that, even when users close and reopen WhatsApp, it is still frozen and continues to crash.

The user's only option is to uninstall and reinstall the app, which could lead to them losing all their chat history.

WhatsApp users are advised to beware of messages from unknown contacts, which may contain the characters.

Rather than opening them on their phone