Conservation efforts have saved at least 28 bird and mammal species from becoming extinct since the year 1993, a study has concluded.

Researchers from the UK analysed 73 of the world's most threatened species and predicted how many would have gone extinct were it not for conservation efforts.

Among those species pulled back from the brink are the Puerto Rican parrot, Mongolian wild horse, Iberian Lynx and the Black Stilt — a New Zealand wading bird.

These animals have been threatened by such factors as human-driven destruction of their habitats, invasive predators, disease, hunting and climate change.

Successful conservation strategies in these cases included controlling invasive species, introduction of protected sites and the efforts of zoos and collections.

The findings follow a WWF report released yesterday warming that global wildlife populations have fallen by more than two-thirds since the seventies. 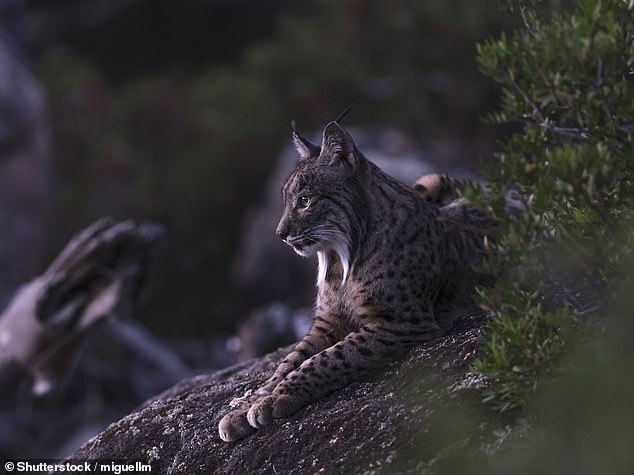 Conservation efforts have saved at least 28 bird and mammal species from becoming extinct since the year 1993, a study has concluded. Pictured, an Iberian Lynx, one of the saved species 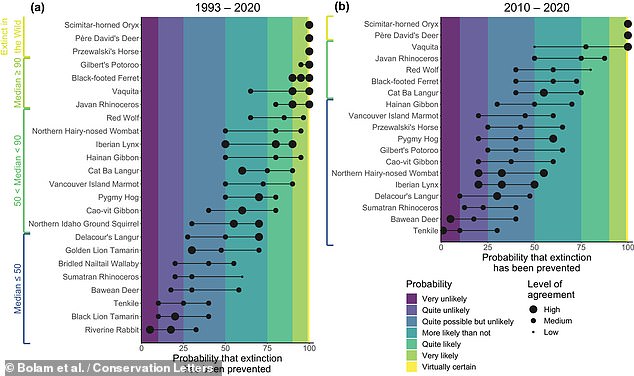 Amazona vittata, the Puerto Rican parrot, numbered only 13 individuals out in the wild 1975.

In 2017, this original population was wiped out by hurricanes.

However, conservation efforts that began in 2006 had reintroduced another group of the parrots into the Rio Abajo State Park that survived.

Without this programme, the parrots would have gone extinct in the wild.

'It is encouraging that some of the species we studied have recovered very well,' said paper author and biodiversity expert Rike Bolam of Newcastle University.

'Our analyses therefore provide a strikingly positive message that conservation has substantially reduced extinction rates for birds and mammals,' she added.

'While extinctions have also occurred over the same time period, our work shows that it is possible to prevent extinctions.'

In their study, Dr Bolam and colleagues compiled observations from 137 experts on 73 of the world's most at-risk species (48 birds and 25 mammals), as identified by the so-called 'Red List' of the International Union for the Conservation of Nature (IUCN).

Each of the species had population totals that had fallen below 250 at any point since 1993, faced ongoing threats and had been targeted for conservation.

They collected such data as each species' population sizes and trends, the threats they face and the actions that have been taken to protect them.

From this information, they set about to calculate the likelihood that each species would have gone extinct if conservationists had not intervened.

The researchers determined that — without conservation efforts — the rate of extinction would have been around 3–4 times higher, with an estimated 21–32 bird and 7–16 mammals species have been saved from vanishing since 1993.

The ranges in these values, the researchers explained, represent the inherent uncertainty in trying to predict the outcomes of such hypothetical circumstances.