Scientists discovered how mysterious stone forests were formed millions of years ago by using candy made in a kitchen.

Believing these clusters of jagged tree-like limestone formations were formed in ancient oceans and lakes, researchers submerged hard candy in a tank of water to see how it dissolved.

The candy wore down to a bed of spiky pinnacles that resembled karst, the ridges, towers, fissures and other formations that are the hallmark of eroded limestone in the stone forests.

The experiment revealed dissolving of the candy created a flow around the points, which is similar to the ancient waters surrounding the rocks that sharpened them to ultra-sharp tips. 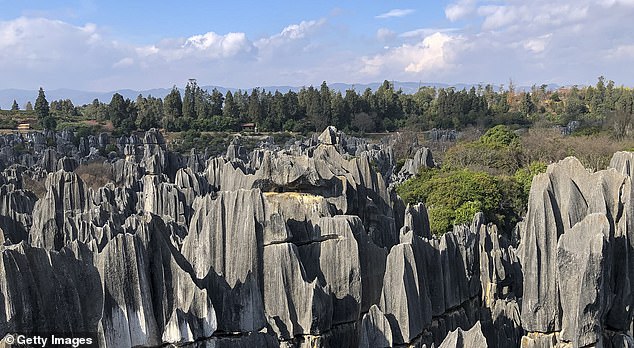 Stone forests, like this one in Kunming, China, are clusters of jagged tree-like limestone formations Scientists believe these sharp tree-like structures were formed under water millions of years ago, and then were exposed when the water evaporated

According to a report in the latest issue of Proceedings of the National Academy of Sciences, scientists at New York University's Courant Institute of Mathematical Sciences put a solid block of rock candy upright in a tank of water and left it to slowly dissolve.

Instead of melting away all over evenly, the candy gradually sharpened into a sugary spikes that resembled karst.

The researchers didn't need to create water flow to wear away at the confection.

As sugar sloughed off the candy, it weighed down the water next to it. The sugar-laden water would sink, creating a small current. 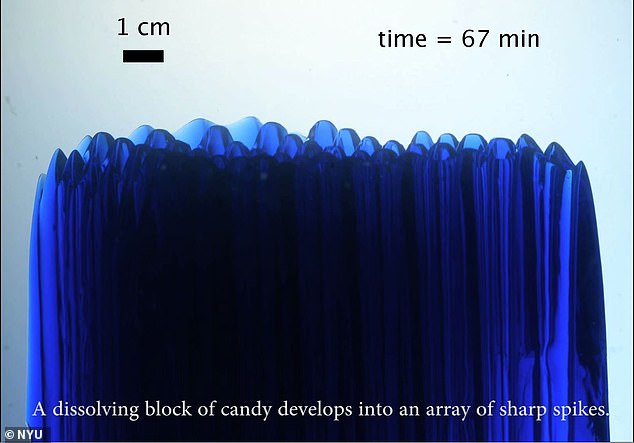 Researchers put a solid block of rock candy upright in a tank of water. Instead of melting away all over evenly, the candy gradually sharpened into a sugary spikes

That flow is what sharpened the candy into points, the scientists explained.

The team believes karst are formed that way, too, though wind, rain and other factors impact their shape, as well.

PREV Original Content podcast: Disney's 'Mulan' remake is fun, if you can forget the controversy
NEXT Amazon gets FAA approval to test US Prime Air delivery drones