New iOS 14 feature warns you if someone is spying on you through your iPhone: Look out for the orange dot at the top of your screen Dot pops up above signal bar as a warning that apps are watching and listening iOS 14 users can also seen if an app has used the microphone or camera recently Apple is focused on strengthening iPhone user privacy with the new OS update

Apple is displaying a small orange dot in the corner of an iPhone's display to let users know their microphone or camera is activated, as part of its iOS 14 software update.

The new version of Apple's operating system, released this week, acts as a prompt for users that at least one of their apps is currently watching or listening in.

The small but noticeable dot appears at the top right of the iPhone display, just above the signal bars.

This is not much to worry about when users are enjoying a video call over apps like Zoom and Facebook Messenger, which need camera and audio to work.

But the dot will be a crucial indicator that other apps are listening in when they shouldn't be. 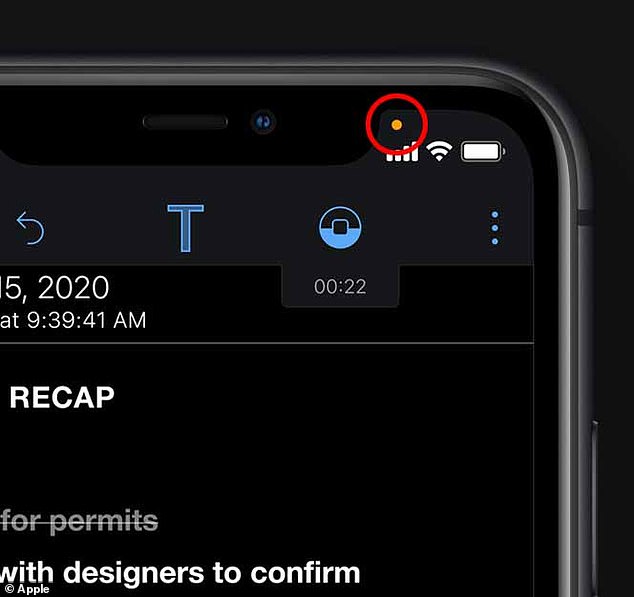 The orange dot, circled in red by MailOnline, appears at the top of your screen whenever an app is using your microphone or camera

The helpful dot is part of Apple's increasing focus on privacy as part of the new iOS.

'Privacy is a fundamental human right and at the core of everything we do, Apple says on its website.

'That’s why with iOS 14, we’re giving you more control over the data you share and more transparency into how it’s used.

'An indicator appears at the top of your screen whenever an app is using your microphone or camera.'

iPhone users can also go to their phone's Control Center to seen if an app has used the microphone or camera recently.

Users can deny apps access to their camera and microphone if they're constant offenders – or delete the apps altogether.

For iPadOS 14 – the new operating system for Apple tablets – the tiny dot is orange when the microphone is in use and green when the camera is in use. 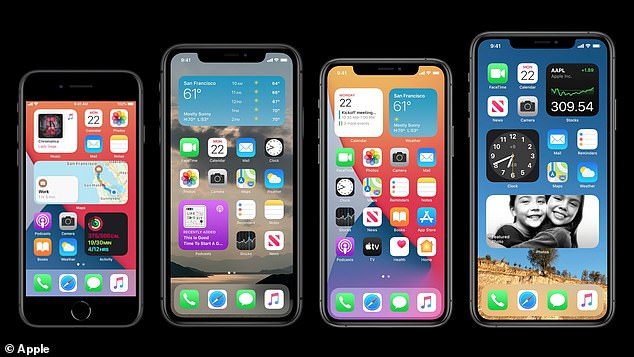 After months of anticipation, Apple released its new iOS 14 Wednesday, September 16 - although there was no sign of the new iPhone 12 as expected

Another privacy-focused update that comes with iOS 14 is the ability to share only an approximate location with apps, rather than an exact location.