Stainless steel may have first been created in ancient Persia during the 11th century — 1,000 years before it was first made in Sheffield, the Steel City.

Sheffield has a proud history as a northern powerhouse and it is all based on a formidable metal industry, bolstered by its 'invention' of stainless steel in 1913.

Stainless steel is defined as an alloy of iron and chromium and by modern standards, must contain at least 10.5 per cent chromium.

But a new study found evidence in modern-day Iran of steel deliberately forged with chromium, at approximately one per cent. 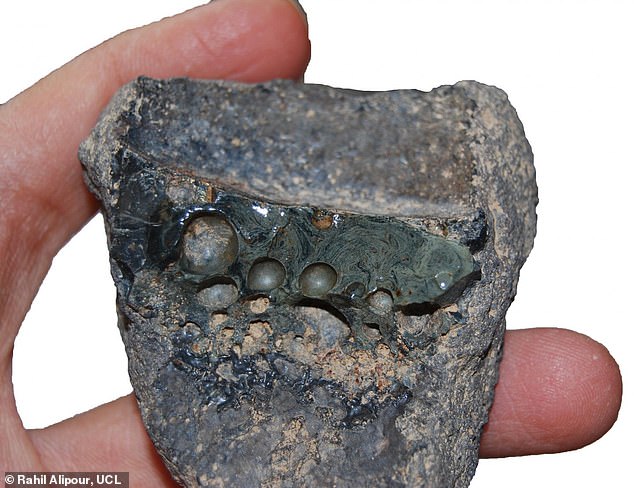 This picture shows slag adhering to the side of a piece of a crucible. It was found at the site of Chahak, in Fars province, southern Iran. Analysis of this revealed it contained chromium, the first known use of it to make a steel alloy

Although the medieval methods left the metal unable to reach the high standards of today, the addition of chromium would have been substantial,researchers believe.

Just like modern-day stainless steel, where the chromium provides an anti-corrosive layer, the Persian steel would have obtained a protective coat.

Researchers from UCL tracked down the archaeological site where the chromium steel was made with the help of historical manuscripts.

They speak of a once famous steel production centre called Chahak.

Sheffield was famous for its cutlery long before it became Steel City.

By the early modern period Hallamshire cutlers were importing steel from the Continent.

The earliest reference to steel making in South Yorkshire is from 1642.

The Sheffield steelmaking district had little or no reputation outside the area before Benjamin Huntsman invented crucible steel in 1742.

The early steelmakers simply supplied the cutlers, but by the mid nineteenth century nearly half the European output of steel was made in the Sheffield district.

Yet the scale of the steel industry in the classic period of the Industrial Revolution was still small compared with that of Victorian times, and it depended on the handicraft skills of its workers.

A new era began in 1837 with the giant steel works of the East End, which soon used Bessemer converters to manufacture railway rolling stock and then armaments.

The cutlers were no longer the major customers of the steelmen.

At the end of the nineteenth century Sheffield remained the leading world centre for special steels, and its population had risen to over 400,000.

However, the physical location of the site remained a mystery, hindered by the fact many current villages in Iran are called Chahak.

But researchers tracked down the most likely location as Chahak, in Fars province, a village only known for agriculture, not archaeology.