Artificial intelligence (AI) can detect loneliness with 94 per cent accuracy from a person's speech, a new scientific paper reports.

Researchers in the US used several AI tools, including IBM Watson, to analyse transcripts of older adults interviewed about feelings of loneliness.

By analysing words, phrases, and gaps of silence during the interviews, the AI assessed loneliness symptoms nearly as accurately as loneliness questionnaires completed by the participants themselves, which can be biased.

It revealed that lonely individuals tend to have longer responses to direct questions about loneliness, and express more sadness in their answers.

'Most studies use either a direct question of "how often do you feel lonely", which can lead to biased responses due to stigma associated with loneliness,' said senior author Ellen Lee at UC San Diego (UCSD) School of Medicine.

'For this project, we used natural language processing, an unbiased quantitative assessment of expressed emotion and sentiment, in concert with the usual loneliness measurement tools.'

There has been a 'loneliness pandemic', marked by rising rates of suicides and opioid use, lost productivity, increased health care costs and rising mortality in the US, the experts say.

WHAT IS NATURAL LANGUAGE PROCESSING?

NLP helps computers communicate with humans in their own language and scales other language-related tasks.

For example, NLP makes it possible for computers to read text, hear speech, interpret it, measure sentiment and determine which parts are important.

A UC San Diego study published earlier this year found that 85 per cent of residents living in an independent senior housing community reported moderate to severe levels of loneliness.

The Covid-19 pandemic and resulting lockdowns have increased the amount of time people have been in solitude, making things worse.

The study focused on 80 independent senior living residents aged between 66 and 94 years, with a mean age of 83.

Trained study staff conducted semi-structured interviews with participants before the pandemic, between April 2018 and August 2019.

Participants were also interviewed during personal conversations, which were taped and manually transcribed. 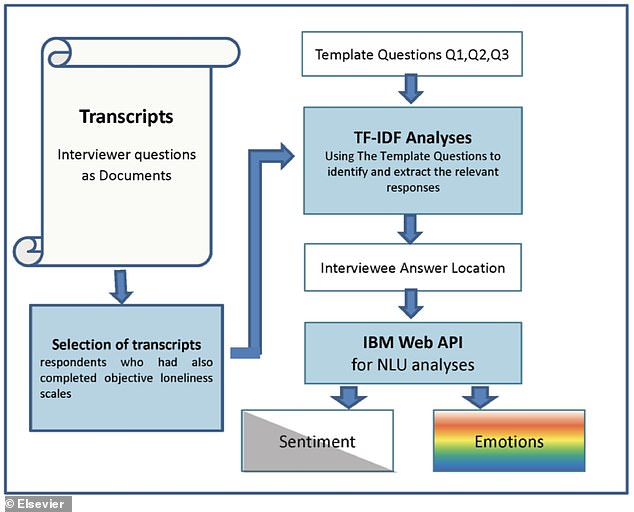 Participants completed semi-structured interviews regarding the experience of loneliness and a self-report scale (UCLA loneliness scale) to assess loneliness, which were then compared. Transcripts were