NASA and Elon Musk's SpaceX are set to launch four astronauts to the International Space Station aboard a Falcon 9 rocket on Halloween NASA announced a new target for the Crew-1 mission - October 31 at 2:49am ET This mission will send four astronauts aboard a SpaceX rocket to the ISS The event follows the successful mission of Demo-2 in May  The new team will spend six months on the ISS conducing research

NASA announced four astronauts will launch to the International Space Station aboard a SpaceX Falcon 9 rocket during the early hours of Halloween Day.

The Crew-1 mission is set to liftoff at 2:40am ET, which follows the successful Demo-2 test flight in May that was manned by NASA astronauts Bob Behnken and Doug Hurley.

The new mission will be flown by Michael Hopkins, Victor Glover, and Shannon Walker of NASA and Soichi Noguchi of the Japan Aerospace Exploration Agency (JAXA).

The team will travel to the station in the SpaceX Crew Dragon capsule and spend six months on the orbiting laboratory conducting research.

The event marks the first time an international crew will fly aboard a NASA-certified, commercially-owned and operated American rocket and spacecraft from American soil.

SpaceX also announced that Crew-1 will overlap with Crew-2 that is set to launch next year, which will be the first time two Dragon capsules have been docked on the ISS simultaneously. 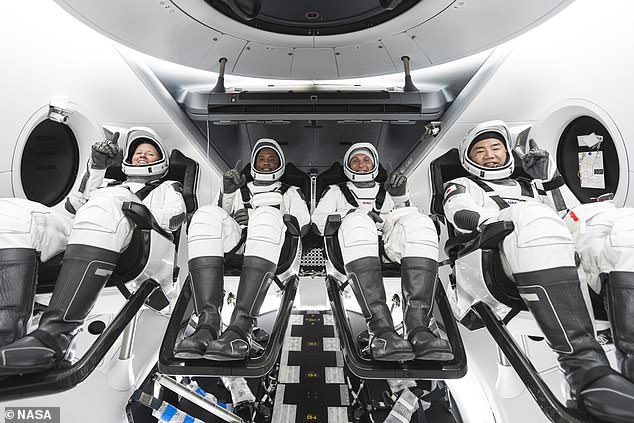 The new mission will be flown by Michael Hopkins (second from right), Victor Glover (second from left), and Shannon Walker (left) of NASA and Soichi Noguchi (right) of the Japan Aerospace Exploration Agency

NASA and Elon Musk's SpaceX made history in May when the duo launched Behnken and Hurley to the International Space Station (ISS).

Charity boss jailed for using her organisation as a front to illegally traffic ...