Millions of women are considering downshifting their careers or leaving the workforce due to Covid-19, according to a new report.

Female workers have been affected by the stress of juggling careers and looking after children, often compounded by a lack of help from their partner, it claims.

Women's rights organisation Lean In, which was founded by Facebook COO Sheryl Sandberg in 2013, surveyed 40,000 employees at 317 US firms for its report.

It found a quarter of women are considering giving up work due to stress and another quarter are worried about their performance at work being judged because of their need to look after their child.

Men are less likely to consider switching to a less demanding job, taking a leave of absence or leaving work altogether to look after their children, compared with women, it also found.

The report suggests employers should do more to address 'employee burnout' to prevent women leaving their jobs and erasing 'progress made toward gender diversity' in the workplace in recent years. 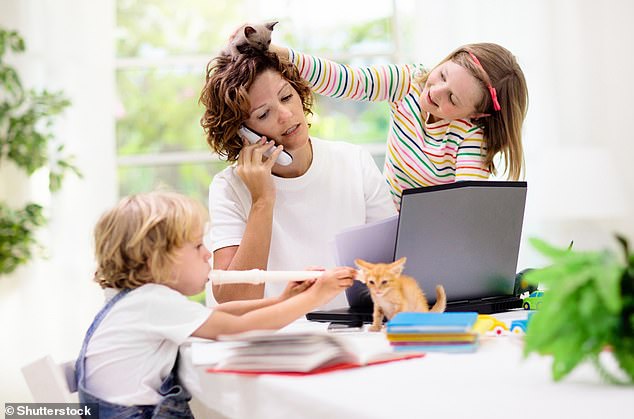 One in four women are considering downshifting their careers or leaving the workforce, which could wipe out years of progress on gender diversity, Lean In said

'Some companies may think that worrying about employee burnout is a luxury they can’t afford right now,' said Sandberg and Lean In CEO Rachel Thomas in a piece for the Wall Street Journal, detailing their findings.

'In fact, it’s mission-critical – if companies rise to the moment, they can head off the disaster of losing millions of women and setting gender diversity back years.'

For the past six years, the Women in the Workplace study has revealed progress for women at all levels of management.

But the disastrous pandemic has meant 'all those gains could be wiped out in a single year', Lean In says.

Working at home due to the coronavirus lockdown has meant the 'boundaries between work and home have blurred'.

Women are having to balance work, childcare and homeschooling responsibilities while worrying about layoffs, furloughs and financial insecurity.

Working mothers are doing a 'double shift' consisting of a full day of work, followed by hours spent caring for children and doing household chores. 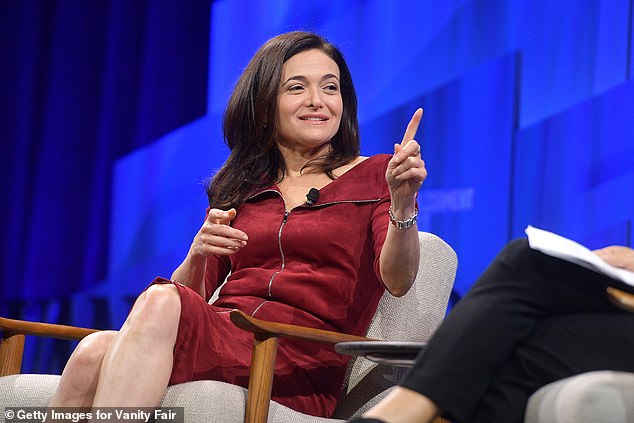 Sheryl Sandberg, COO of Facebook, founded Lean In in 2013 to help offer women 'the ongoing inspiration and support to help them achieve their goals'

Mothers are are more likely than fathers to worry that their performance is being negatively judged due to their combined responsibilities during the pandemic, the report says.

One female vice president of a company with two children said: 'I feel like I am failing at everything – I’m failing at work, I’m failing at my duties as a mum, I’m failing in every single way, because I think what we’re being asked to do is nearly impossible.

'How can you continue to perform at the same level as in the office when you had no distractions, plus being asked to basically become a teacher for kids and everything else with online learning?

'I’m doing it all, but I’m feeling like I’m not doing any of it well – I worry that my performance is being judged because I’m caring for my children.'

Lean In found mothers are more than three times as likely as fathers to be responsible for most of the housework and caregiving.

They’re 1.5 times more likely than fathers to be spending an extra three or more hours a day on housework and childcare, which is equivalent to 20 hours a week, or half a full-time job.

Meanwhile, one in five mothers who don’t live with a spouse or partner, are more likely than mothers overall to have concerns about financial insecurity.

And dads are less likely to be seen as the primary caregiver by the children, which can increase stress, the report suggests.

One woman with three children under five years said: 'There’s an assumption in a lot of families that the woman is the primary caregiver – kids literally walk past their dads to go to their mums to ask for stuff.

'The pandemic has highlighted how disproportionately things fall on women.'

Perceptions of how much housework mothers and fathers do also vary, the report found.

76 per cent of mothers with children under age 10 say

PREV Honda will quit Formula 1 to focus on fuel cell and EV technology
NEXT 'Risky drinking' is found to increase among women in their 50s and 60s, study ...

Will we EVER learn to love the council flat kid who became F1's greatest driver?