Three mobile network goes DOWN across the UK leaving thousands of customers unable to make calls or get online The first reports of problems with the Three network came in about 08:47 BST This had turned into a flood of reports from across the country by 09:15 BST  Three says it is aware of a problem with its network and is working to fix it

The Three mobile network has gone down across the UK leaving thousands of customers unable to access the internet or make phone calls.

First reports of a fault with the network were submitted to the DownDetector website at about 08:47 BST, with a flood of complaints coming in by 09:15 BST.

Of those reporting problems 52 per cent say it is with their mobile phone, 26 per cent are getting no signal and 21 per cent can't get access to the mobile internet.

A Three UK spokesperson said they were aware there was an issue with the network and were 'working hard to fix it' as quickly as possible.

The outage comes as the government encourage people to return to working from home if they can off the back of a dramatic spike in coronavirus infections. 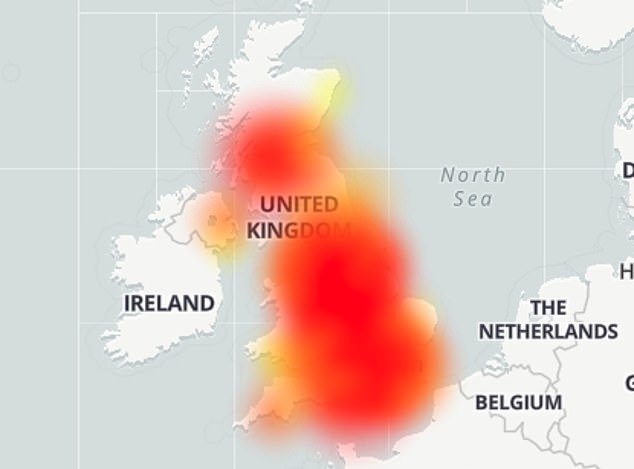 The company apologised for the outage, saying: 'We know how vital communications are at the moment and are sorry for any inconvenience caused.'

Users from across the country have taken to twitter to express concern over the lack of connection, with many tweeting Three Support to ask about any outage.

PREV Foodies are urged to avoid wild sea bass and eat SCALLOPS
NEXT 'Risky drinking' is found to increase among women in their 50s and 60s, study ...