Rare yellow 'albino' turtle that 'looks like melted burger cheese' is rescued from a village pond in India Animal is believed to be a rare example of the specie called Indian flap shell  It is a bizarre yellow colour likely due to a genetic mutation causing albinism   Villagers s rescued the animal from a pond in a West Bengal, India

A bizarre turtle that is bright yellow has been spotted in a village pond in West Bengal, India.

The rare animal is afflicted with a form of albinism which affects its colouration and has been compared online to melted cheese on a burger.

It belongs to a rare species called the Indian flap shell turtle. 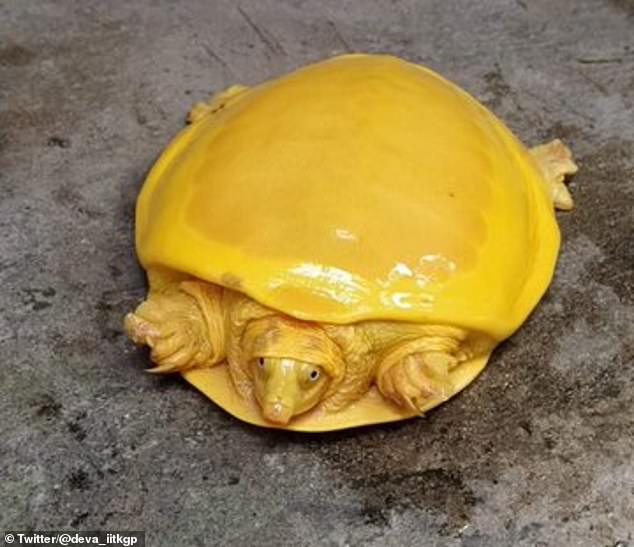 A bizarre turtle that is bright yellow has been spotted in a village pond in West Bengal, India. The rare animal is afflicted with a form of albinism

Sneha Dharwadka posted images of the turtle on Twitter and suggested two potential explanations for its bizarre colouration.

'It's an albino kind whose peculiar yellow colour is may be bcoz of either some genetic mutation or congenital disorder due to absence of tyrosine pigment,' he says.

The Indian flap shell turtle, which is normally green, is typically found in South Asia and is between 9 to 14 inches long.

In August, a similar animal of the same species was discovered in Nepal.

PREV These are the audio gadgets to gift this season
NEXT Hulu tests its social viewing feature, Watch Party, with election news live streams