(Bloomberg) -- This time last year, CD Projekt SA was among Europe’s hottest stocks, riding the wave of pandemic gaming demand and on the way to a record high ahead of the release of the studio’s much-anticipated Cyberpunk 2077 game.Fast forward 12 months, the stock is the region’s worst performer of 2021, down 63% from its August record, with the company facing questions about how it plans to fix problems with the botched release of the bug-ridden game.It’s those difficulties that will be in focus on Thursday when CD Projekt reports on a year that included the buildup, release and disappointment of the beleaguered title. While preliminary data showed profit surging on initial sales of Cyberpunk, the main attention will be on any trading update for this year and comments on how the studio will address the catalog of glitches that turned a potential blockbuster into the cause of a share price meltdown.“There is still more risk than reward for CD Projekt’s holders, as without visible improvement of gamers’ ratings the studio won’t be able to provide strong sales for this year,” Ipopema Securities SA analyst Michal Wojciechowski said by phone. “While some traders may seek some tactical upside, we still don’t know whether the studio will be able to improve its key franchise fast, and the next games are scheduled far in the future.”Starring Keanu Reeves, Cyberpunk 2077 is a complex futuristic role playing game that had been predicted to take the gaming world by storm when it was launched on Dec. 10. But it wasn’t long before players were reporting multiple glitches, causing negative reviews and triggering Sony Corp.’s unprecedented decision to remove the title from its PlayStation store.A strategy update at the end of last month failed to address concern over how the Polish company will effect a turnaround, showing only that Cyberpunk wasn’t yet ready for the full multi-player version that could restore its popularity. It also left questions unanswered over when CD Projekt will be ready with an updated version for next-generation consoles.Cyberpunk SalesThursday’s results, expected after markets close, should shed more light on a 9% revenue miss, reported by the company in preliminary figures late last week. A key number for analysts will be how many copies of Cyberpunk were sold last year, and whether this contributed to the miss. The average estimate of 10 analysts surveyed by Bloomberg is 14.5 million units, reflecting strong pre-orders that enabled CD Projekt to report quarterly net income on a scale comparable to its combined profit of the last five years.The profit increase may see the company sweeten the blow to shareholders of recent months by proposing a dividend, something it used to avoid. Estimates indicate a potential payout of 5 zloty a share, equal to a dividend yield of 2.7%.But that’s likely to be as good as it gets. Reflecting the current uncertainty, estimates for Cyberpunk sales in 2021 range widely from 4 million units to 17 million units, with the average projection being for a drop to 10.8 million copies. Those calculations depend on how quickly the game can be restored to the Sony PlayStation store and made available for next-generation platforms.Proof Needed“Any new data on how Cyberpunk is being sold this year would be helpful to get more clarity, as we all know that first-quarter sales are disappointing,” Wood & Co. analyst Maria Mickiewicz said by email.CD Projekt declined to comment ahead of the results.Analysts are mixed on the prospect of a recovery in the stock, with more recommending to sell than to buy, according to data compiled by Bloomberg.“It would take a serious positive movement in the unit sales for Cyberpunk 2077, and a return of engagement from current owners” for faith to be restored, said Matti Littunen, an analyst at Bernstein. “In other words, hard data proof that there’s major franchise value left.”Here’s a look at the flashpoints in CD Projekt’s wild year:April 3, 2020: CD Projekt becomes the most valuable company listed in Warsaw as stock became a pandemic winnerAug. 27: Shares soar to a record high ahead of Cyberpunk releaseDec. 8: Stock falls 7.1% as initial press-reviews fail to match high hopes for titleDec. 10: Cyberpunk launches with 8 million copies sold in pre-orders, but shares fall a further 8.5% as players report numerous glitchesDec. 18: Sony pulls Cyberpunk from its PlayStation Store, sending stock plunging to its lowest since MarchMarch 29: Studio releases large patch to fix almost 500 bugsMarch 30: Strategy update provides no clear path to fix franchise, pushing stock to a 2-year lowApril 15: Shares drop to 13-month low after company unexpectedly publishes preliminary FY2020 data, delaying full report by 4 daysFor more articles like this, please visit us at bloomberg.comSubscribe now to stay ahead with the most trusted business news source.©2021 Bloomberg L.P.

PREV Stadia product head John Justice leaves Google
NEXT Scientists reveal the most AGGRESSIVE breeds - with Long-Haired Collies at the ... 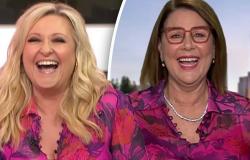