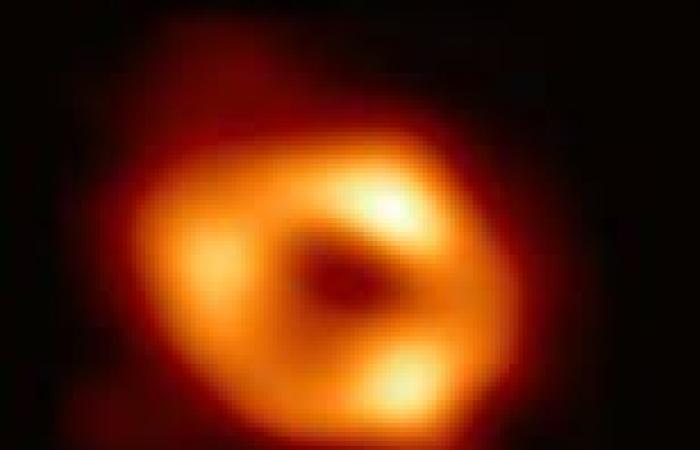 In an historic first, scientists have captured a remarkable image of a supermassive black hole at the heart of our Milky Way galaxy.

The eagerly-anticipated picture, revealed to the world today, show Sagittarius A* — which is roughly 4.3 million times the mass of our sun and is located about 27,000 light-years away from the Earth.

It comes just over three years after the same astronomers revealed the first ever photograph of a black hole.

In a highly-anticipated string of press conferences held simultaneously around the world, the team behind the Event Horizon Telescope shared the findings from their observations, calling the moment a 'groundbreaking Milky Way galaxy discovery'.

They said it was 'the glue that holds the galaxy together'. 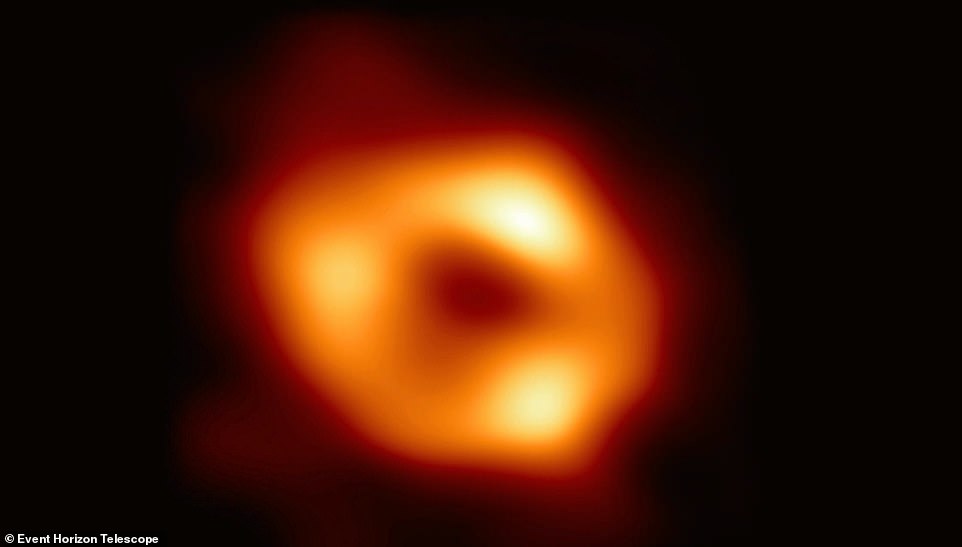 In an historic first, scientists have captured a remarkable image of a supermassive black hole at the heart of our Milky Way galaxy

The astronomers said the discovery provides overwhelming evidence that the Sagittarius A* object is indeed a black hole, and yields valuable clues about the workings of such giants, which are thought to reside at the centre of most galaxies.

Scientists had previously seen stars orbiting around something invisible, compact, and very massive at the centre of the Milky Way.

This strongly suggested that the object was a black hole, and today's image provides the first direct visual evidence of it.

Although it is not possible to see the black hole itself, because it is completely dark, glowing gas around it reveals a telltale signature: a dark central region (called a shadow) surrounded by a bright ring-like structure.

The new view captures light bent by the powerful gravity of the black hole.

'We were stunned by how well the size of the ring agreed with predictions from Einstein's Theory of General Relativity,' said EHT Project Scientist Geoffrey Bower from the Institute of Astronomy and Astrophysics, Academia Sinica, Taipei.

'These unprecedented observations have greatly improved our understanding of what happens at the very centre of our galaxy, and offer new insights on how these giant black holes interact with their surroundings.'

The EHT team's results are being published today in a special issue of The Astrophysical Journal Letters.

Dr Younsi, a UKRI Stephen Hawking Fellow at the UCL Mullard Space Science Laboratory, said: 'Our results are the strongest evidence to date that a black hole resides at the centre of our galaxy.

'This black hole is the glue that holds the galaxy together. It is key to our understanding of how the Milky Way formed and will evolve in the future.

'Producing this image is the result of a monumental effort by hundreds of scientists over five years.

'It was especially challenging because of the haze of stars, dust, and gas in between Earth and the galactic centre, as well as the fact that the pattern of light from Sgr A* changes quickly, over the course of minutes.

'But now we have comprehensive findings, and this work opens a new chapter in our understanding of black holes.'

PREV Thursday 12 May 2022 02:17 PM Astronomers see a nova explosion on a white dwarf for the first time trends now
NEXT Egg-freezing IVF clinics trying to cash in on MEN by offering similar treatment ... 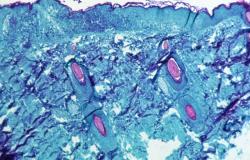