Jon Stewart hit out at Senate Majority Leader Mitch McConnell after the Republican from Kentucky questioned why the former Daily Show host was ‘all bent out of shape’ over the 9/11 Victims Compensation Fund.

Stewart appeared on Stephen Colbert’s Late Show on Monday to respond to comments made by McConnell earlier in the day.

He accused McConnell of taking a ‘we’ll get to it when we get to it’ approach while accusing him of using 9/11 first responders as a ‘political pawn.’

McConnell told Fox & Friends on Monday morning that there was no reason to get ‘all bent out of shape’ over the issue. 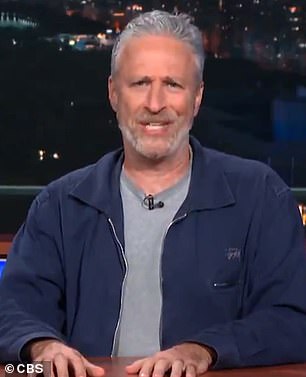 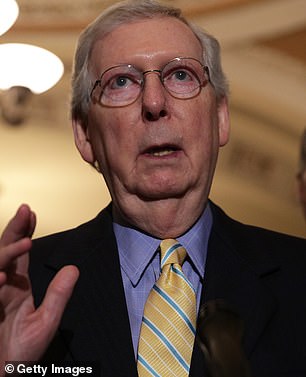 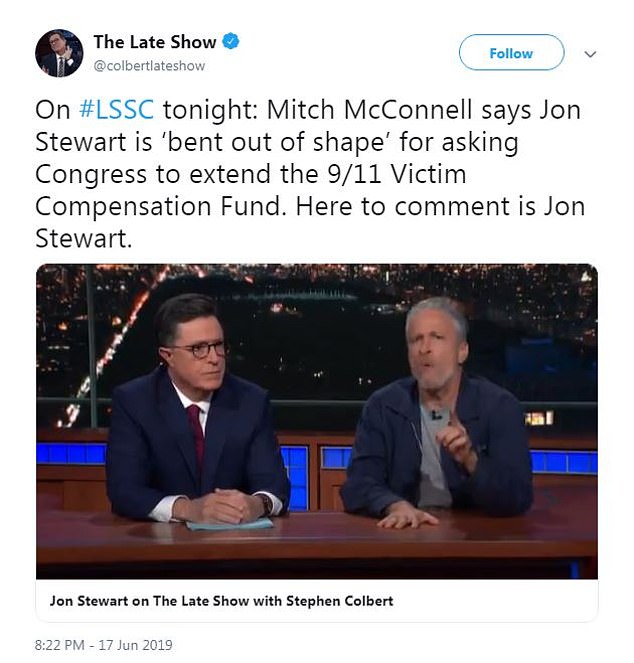 'Well many things in Congress happen at the last minute. We have never failed to address this issue, and we will address it again,' McConnell told Fox & Friends Monday morning in reference to the compensation that was created for victims of the attack in exchange for their agreement not to sue the airline corporations involved.

'I don't know why he's all bent out of shape,' the Republican leader continued. 'We will take care of the 9/11 Victims Compensation Fund.'

Stewart appeared at a House hearing last week and gave an emotional statement when only five of the 14 members on the subcommittee showed up for the hearing.

On his CBS show which aired late Monday, Colbert asked Stewart if he was ‘bent out of shape.’

‘No, no Mitch McConnell, I am not bent out of shape, I’m in fine shape,’ Stewart said.

‘Well I am out of shape. But not because of you… I’m fine.

‘I’m bent out of shape for them, these are the first heroes and veterans and victims of the great trillions of dollars war on terror.

‘And they’re currently still suffering and dying and still in terrible need.

‘You would think that that would be enough to get Congress’s attention. But apparently it’s not.’ 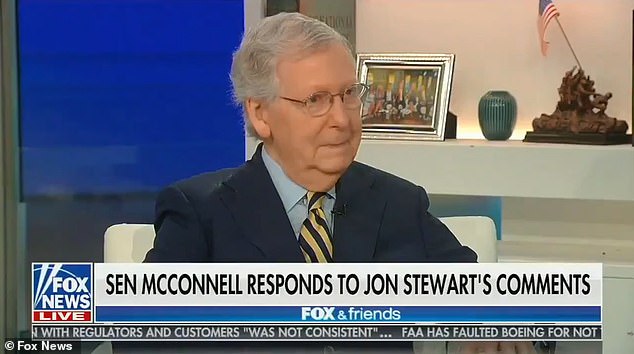 McConnell chastised comedian Jon Stewart for 'looking for some way to take offense,' to the poor turnout for a 9/11 Victims Compensation Fund hearing 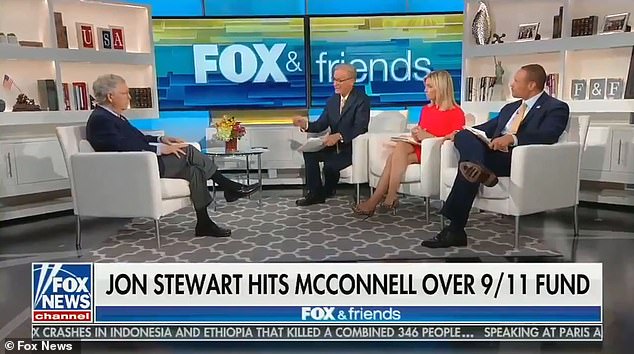 While appearing on Fox & Friends, McConnell responded to Stewarts attacks on him, claiming the comedian was 'all bent out of shape' for no reason

Stewart also slammed McConnell for saying on Monday that the reason so few legislators were present during Stewart’s appearance last week before the House Judiciary Committee was because ‘members have a lot of things going on at the same time.’

Stewart joked he didn’t realize lawmakers were so ‘busy.’

‘Now I feel stupid. This is a huge misunderstanding.

‘I didn’t know that they were busy. I didn’t mean to interrupt them with their jobs.

‘Honestly, Mitch McConnell, you really want to go with that we’ll get to it when we get to it argument for the heroes of 9/11.’

Stewart said McConnell was ‘not good at this argument thing.’

PREV Coronavirus updates: Arrests after party boat with 170 guests cruises around New York City
NEXT James Murdoch steps down from the board of News Corp over 'disagreements over ...