Air passenger who picked up another traveller's £1,000 Longines watch from an airport security tray when she flew to Romania to visit her family then kept it for 10 days is CLEARED of theft after saying she just forgot to hand it in Anda Gabur was accused of snatching the watch from a tray in airport security 34-year-old kept it for 10 days before returning to the UK to meet airport police Jury today agreed she meant to give it to staff but that had 'slipped her mind'

By Sebastian Murphy-bates and Rory Tingle For Mailonline 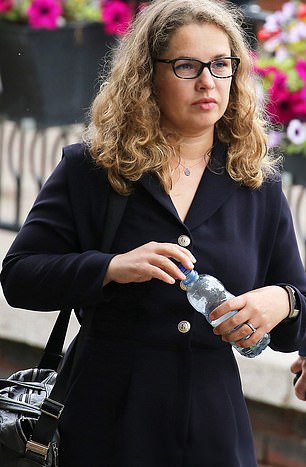 An air passenger who picked up another traveller's £1,000 Longines watch from an airport security tray then kept it for 10 days was today cleared of theft after insisting she just forgot to hand it in.

Anda Gabur, 34, had sent her own belongings in trays through an X-Ray machine at Luton Airport on August 9 and went through the security arch to wait for her property to come through.

After gathering her items out of the grey plastic trays, the businesswoman spotted the silver Longines watch on its own in another tray and picked it up.

Shortly afterwards, at around 6.45am, she and her husband continued into departures.

Today, Ms Gabur told Luton Crown Court she had intended to hand the watch to airport staff, but became distracted when one of her bags had to be searched and it 'slipped her mind.'

The owner of the watch, Magdalene Doherty, reported the loss of her family heirloom to airport security staff that same morning.

As a result, security staff examined CCTV footage to see who had taken the watch and identified Ms Gabur, who at the time was on holiday in Romania with her family.

She returned to the