This is the heartwarming moment a child with Down's syndrome high-fived as many spectators as possible as he raced to a fun run finish line.

Despite being in the race's last wave, and needing a sit down along the way, little Lincoln was delighted as he reached the final stretch and heard the crowd clap and cheer.

Video footage shows him sprinting along in a red T-shirt as he high-fives at least 16 people en route to the finish.

As he approaches the last 100 metres, he is cheered on by the commentator, who crouches down to encourage him.

Lulu graciously allowed Lincoln to cross the line before her as their mother, Leanne Parsisson, 32, watched on.

Ms Parsisson said: 'Lincoln lights our day up every day. He's a little character - a handful who keeps us on our toes. I felt so proud watching him run cross that finish line. He was loving it.

'I ran with him and he kept sitting down loads, but when he got to the crowd he milked it and kept high-fiving everyone. When he got near the finish, he started sprinting and was cheering himself along too. He was properly milking the crowd.

'He's a little crowd pleaser and loves a good high-five. He does that's when he knows he's done something good. 'The attention from the crowd helped him finish. They were cheering him on as he approached the line. 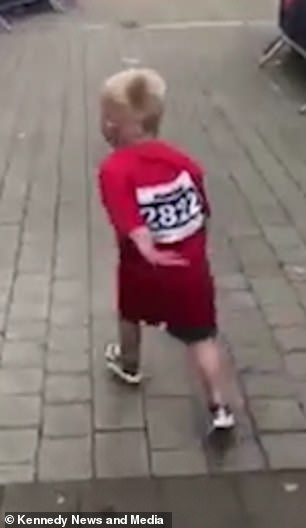 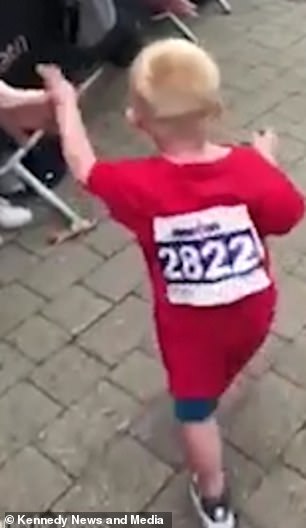 'At the end, because he'd already escaped under the barrier and run to the finish line once, the commentator was shouting "Our friend's back!"'

The heartwarming video has been viewed 15,000 times and racked up more than 600 comments, likes and shares.

Ms Parsisson, a healthcare assistant, said: 'This is his third year, he loves it. He always does it with his twin sister, who doesn't have Down's Syndrome. You can see her in the video and she stops for him.

'Before the race, he jumped under the barrier and was