Terrifying moment motorist is forced to swerve to avoid a drink-driving pensioner who drove the wrong way down motorway David Haughton, 75, travelling into oncoming traffic down M6 near Lancaster  Dashcam footage shows another driver having to swerve at the last second  Haughton is now serving an eight-month jail sentence and two-year driving ban

Jaw-dropping dashcam footage has revealed a drink-driving pensioner travelling into oncoming traffic on a motorway.

David Haughton, 75, was caught going the wrong way down the M6 near Lancaster on April 23 this year.

Police say he was initially going in the right direction before turning his Volvo around and driving the other way. 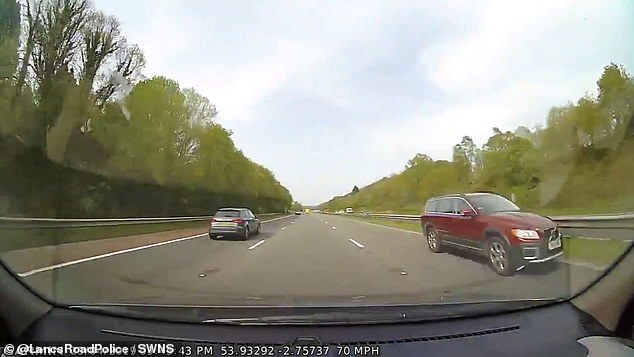 PREV Spanish police help cut free a huge sea turtle with rope wrapped around its ...
NEXT James Murdoch steps down from the board of News Corp over 'disagreements over ...