(fashion) Emma Smith is standing in the small, soundproofed building in her back garden that she calls the Tingle Shed. Piled around her are intriguing props: folded squares of fluffy fabric, a white doctor’s coat, loose hair extensions and boxes filled with rice.

Surrounded by cameras and highly sensitive microphones, she runs her long, crimson-painted nails back and forth across the surface of a sequined make-up bag. ‘Hello beautiful you,’ she whispers, slowly and encouragingly. ‘Relax. Be calm.’

The gentle scratching of her nails and the hypnotic tone of her voice are pleasantly soothing, certainly. 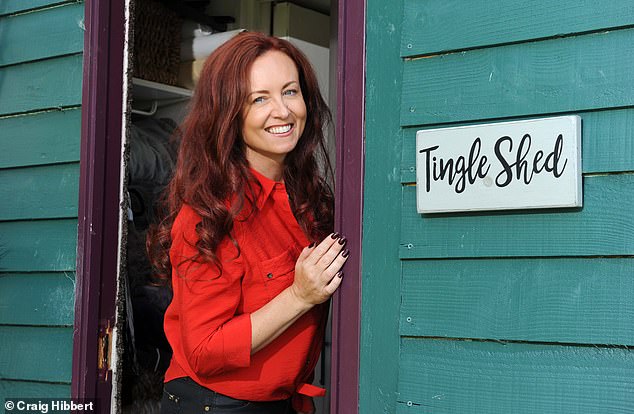 But to the hundreds of thousands – sometimes millions – of devotees who watch her videos, they’re nothing short of an addiction.

Better known online as WhispersRed, Emma is Britain’s leading practitioner of ASMR, or Autonomous Sensory Meridian Response, the triggering of ‘brain tingles’ which trickle down the neck and spine and promote a sense of deep relaxation. Followers claim it helps them beat anxiety, insomnia and stress.

To activate the tingles, 40-year-old Emma uses a variety of stimuli, which could be anything from the sound of her brushing and snipping a lock of artificial hair to the pleasing crackle her fluffy microphone covers make as she touches them. She gently scrunches plastic, taps surfaces and crinkles fabric while whispering in her mellifluous tones.

Sometimes the mother of two even acts out different roles, dressing up in a doctor’s uniform and pretending to check the viewer’s ears and eyes with a bedside manner to pacify even the most terrified hospital-phobe.

It may sound slightly bonkers, but the 200 million views and 800,000 dedicated subscribers her hypnotic videos have amassed on YouTube over the past six years suggest otherwise.

In her most popular video, Emma screws and unscrews the lid on a jar and runs a chopstick through a bowl of dry rice. It has been seen almost 12 million times since she posted it a year ago.

Recently, ASMR has exploded from a niche online movement into a genuine phenomenon, and one which has transformed Emma’s life. Business is booming and brands are clamouring to sponsor her videos. She has hosted live ASMR events, and presented a podcast series featuring model Daisy Lowe and musician Professor Green which is sponsored by Fuze Tea. And last month, she released a series of ASMR audiobooks.

Every day Emma gets recognised on the street by devoted fans who frequently stop and thank her for helping them sleep or making them feel calmer.

Now she has become the first ‘ASMRtist’, as she describes herself, to write a book about its power. Unwind Your Mind, out next week, is the story of how she discovered this extraordinary phenomenon, with an element of self-help for those interested in exploring it.

Billed as an ‘entry-level’ guide to ASMR, it offers exercises and tips for how we can all find our own sensitivity, which she says will ‘promote self-awareness and self-development’.

WHERE IT ALL BEGAN

Emma, who lives in South London with husband Nam and children Mia, 15, and Bo, nine, was living a frazzled life as a small businesswoman before she discovered ASMR. ‘Like a lot of women, I was worn out,’ she says. ‘I was constantly running around doing things for my family and had no time for myself.’

That changed in 2010 when she was involved in a car accident. Her injuries resulted in a long hospital stay, followed by a year of operations and physiotherapy to learn to walk again. ‘It forced me to stop,’ she says. Coincidentally, 2010 was also the year the term ASMR was first coined in America. 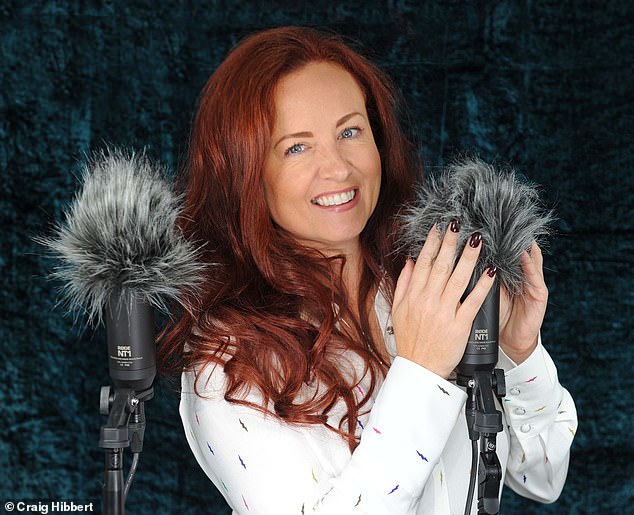 To activate the tingles, 40-year-old Emma uses a variety of stimuli, which could be anything from the sound of her brushing and snipping a lock of artificial hair to the pleasing crackle her fluffy microphone covers

Two years later, suffering from post-traumatic stress disorder and struggling to sleep, Emma looked on YouTube for something to soothe her and found a video of rainforest sounds. ‘Then I found ASMR videos and realised there was a name for something I’d felt my whole life.’

From childhood, Emma had experienced a sensation she likens to ‘pins and needles, but a really pleasant version.’ She calls them ‘sparkles’ and says that after the feeling has passed, ‘it’s as if all the tensions in the body are released.’

So she began to make her own videos, initially just using an iPad to film herself speaking. ‘I just introduced myself,’ she says. ‘It was really wobbly and amateurish. I didn’t expect anyone to watch, but people responded straight away and were really kind, telling me I had a nice voice.’

Initially, she made her offerings infrequently and didn’t monetise them. ‘I used them as a little escape, something just for me,’ she says.

But gradually, her following increased and she began making videos every week. ‘I didn’t tell friends and family – I didn’t even tell my husband. Everyone found out when I appeared on Loose Women.’ Eventually, Emma invested in increasingly sophisticated microphones and cameras and had her Tingle Shed built and soundproofed. The turquoise-painted building at the back of Emma’s garden is where she films her videos.

Like a professional studio, her camera equipment is always set up and ready to go, with various backdrops to add variety to her films. Most importantly, the Tingle Shed is away from the hustle and bustle of the family home, so she can record in silence.

So sensitive is the equipment that Emma avoids filming within an hour either side of eating, because the microphones will pick