(fashion) A mother-of-11 who lives on benefits has hit out at those who judge her, saying her children 'get the care they need' with her on-hand to look after them 24/7.

Bethan and Andy Carter, of Briton Ferry, South Wales, have nine children at home aged between three and 16.  Another two have already moved out.

Mrs Carter, 40, juggles looking after five girls and six boys all at once, with husband Andy father to seven of them.

She is severely epileptic and suffers memory loss as a result of a cyst inside her brain.

Three of her children also suffer with epilepsy and have several seizures a week.

Mrs Carter used to work in a cafe but quit her job when her son Mark was born 16 years ago and says she isn't ashamed to live on £1,000 of government money a month. 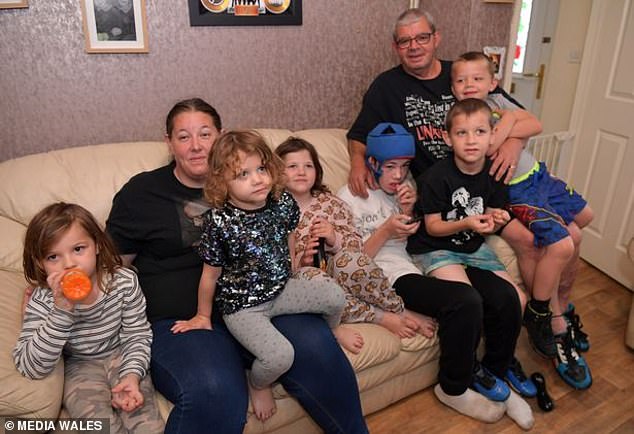 Bethan and Andy Carter are pictured with six of the nine children they look after at home in Briton Ferry, South Wales. Another two have already move out

She said: 'People judge me because I am on benefits, but unless you have a severely autistic child you can't know what it is like.

'I am happy with my family - I do not care what people say. They are happy and get the care they need.

'They are loved. I find it very rewarding to be a mum. Being a mum of so many kids is hard but I love it - they are all so loving.'

His mother added: 'When he fits, he just collapses and, when he comes out of a fit, he screams. He can not handle the little ones and likes being on his own.'

With two washing machines and two dryers, there is washing on all the time and, with two bathrooms, Mrs Carter can wash three of the children at a time in the shower downstairs.

The Carter family go through three big boxes of washing powder every month.

'Time flies and before you know it is bed time again,' she said. 'After dinner, they just play - there are toys everywhere.

'I try to get them to sleep by 8pm or 9pm. I am up until midnight or 1am doing things around the house.

'It is hard work to have that many children, but they are happy and they are very close to each other. I am happy I got sterilised but I do not regret anything.'

Commenting further on their daily routine, she went on: 'I get breakfast and all the medication ready - there are a lot of meds in the morning and at night and I have to make sure everyone has their own medication,' she said. 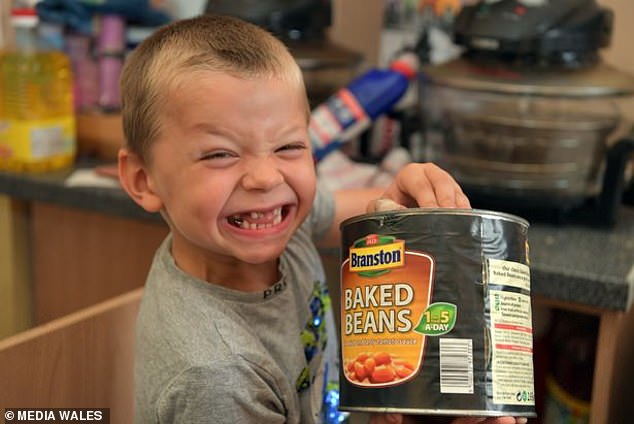 Five-year-old Marley Carter is pictured with a giant can of baked beans, purchased by his mother Bethan to make sure his eight siblings are fed properly

'I put their clothes out the night before and a lot of them dress themselves but not all of them.'

Mark, 16, goes to Ysgol Maes Y Coed in Bryncoch and gets picked up by a taxi to go to school.