As election bribes go, it was a belter: a whopping great bung. We are not talking about a few quid here and there over the next few years.

This one would amount to a four-figure sum for hundreds of thousands of people and several hundred quid for millions more.

The only problem for Jeremy Corbyn was that I could not find a single person at Waterloo Station last night who believed, for one minute, that an incoming Labour government would (or could) slash rail fares by a third – as Mr Corbyn declared yesterday.

'Pull the other one', 'Not a chance' and umpteen unprintable variations of the above were the instant response when I attempted to road-test Labour's latest election pledge during the evening rush hour at London's busiest station. 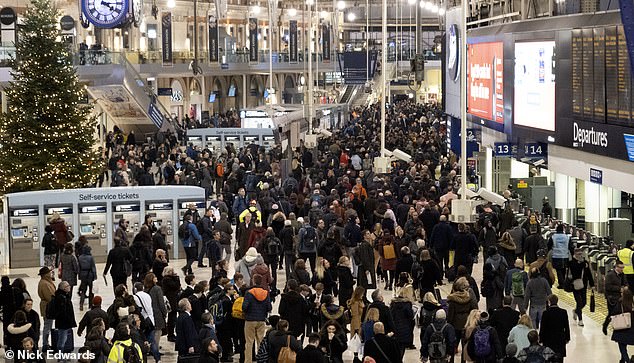 Home time: Commuters at Waterloo station were ‘packed in like sardines’ during the evening rush-hour yesterday as train guards began their 27-day walkout

They had good reason to be sceptical, of course. Just hours earlier, Mr Corbyn's chums in the RMT transport union had begun their attempt at shutting down the entire South Western Railway (SWR) network.

Yesterday was Day One of what is scheduled to be the longest rail strike in living memory, one designed to make travelling in and out of Waterloo a misery for millions of people until the New Year.

Ostensibly, it is a row about SWR's plans to run a new fleet of trains on which drivers (average salary: £52,000) and not guards will operate the doors – as they already do on so many other lines. Given that Labour's proposed trade union reforms would rewind the clock to the 1970s – with a return to secondary picketing and open strike ballots – the rest of the country need only look at what is happening on SWR this week to enjoy a glimpse of life in a Corbyn Britain.

I decided to see for myself yesterday morning, setting out well before dawn with the well-wrapped commuters at one of SWR's main hubs. Guildford in Surrey offers multiple options for travellers heading for the capital, whether on the fast Portsmouth-London line or along the suburban routes up to Waterloo. It also straddles the East-West route from Gatwick to the Thames Valley.

Come 6.15am, shivering commuters were already queuing three-deep for a London service which had been slashed in half for the crucial peak periods and then slashed further still for the rest of the day. On top of that, SWR had elected to send out shorter-than-usual trains and many of these were suffering delays.

Those who would normally arrive in hope of a seat came merely hoping for a few square inches of standing space. Those who usually spend the entire journey on their feet anyway – and that goes for most travelling in standard class at peak times anywhere within 30 miles of London – were just hoping for a moderately ghastly morning rather than a total nightmare. 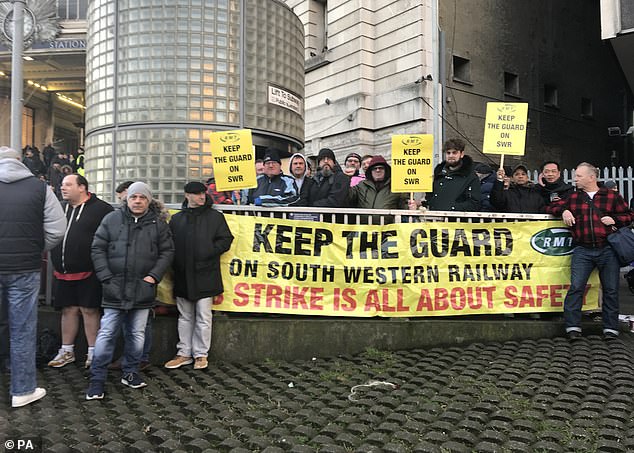 What struck me was their good humour. 'Don't forget it's only Day One. So it's only going to get worse,' said Hugh, a City worker who usually commutes from nearby Wanborough except that SWR has closed his station for the duration of the strike.

'I never get a seat at this time of day but that's the least of my worries today,' said Kelly, a Guildford regular bound for her desk in a Soho finance department.

The usual 6.27, 6.33 and 6.52 trains had been merged into a single 6.37 service. To make things worse, that arrived 12 minutes late. While Kelly joined the herd waiting to squeeze aboard, software executive Mark Finch was trying to get off, in the hope of a connection to Reading. He had arrived at his local station, Liphook in Hampshire, shortly after 6am. 'There were four times the usual number of people on the platform and it was minus two! What a joke!' he said.

PREV New Zealand records seven new cases of coronavirus overnight as Jetstar cancels ...
NEXT James Murdoch steps down from the board of News Corp over 'disagreements over ...