Sydney residents have been blanketed by a thick haze on Tuesday morning as dangerous bushfires blazing across New South Wales continue to push hazardous smoke over the harbour city.

Visibility was so low that Sydney ferries were forced to stop running, as smoke infiltrated train stations and set off fire alarms, causing havoc for the public transport system.

Buses will replace ferries between the city and Manly on the northern beaches, but no other routes will receive additional services. Sydney Ferries suggested commuters 'delay their journeys'.

Transport NSW also warned some customers may be overcharged for their fares as Opal gates would be affected.

Particulate readings of 778 for PM2.5 in Mona Vale on the city's north-east coast meant the suburb had the highest reported pollution levels in the world on Tuesday morning.

By comparison, Shanghai had a PM2.5 level of 188 while Hong Kong had a reading of just 135 at midday. 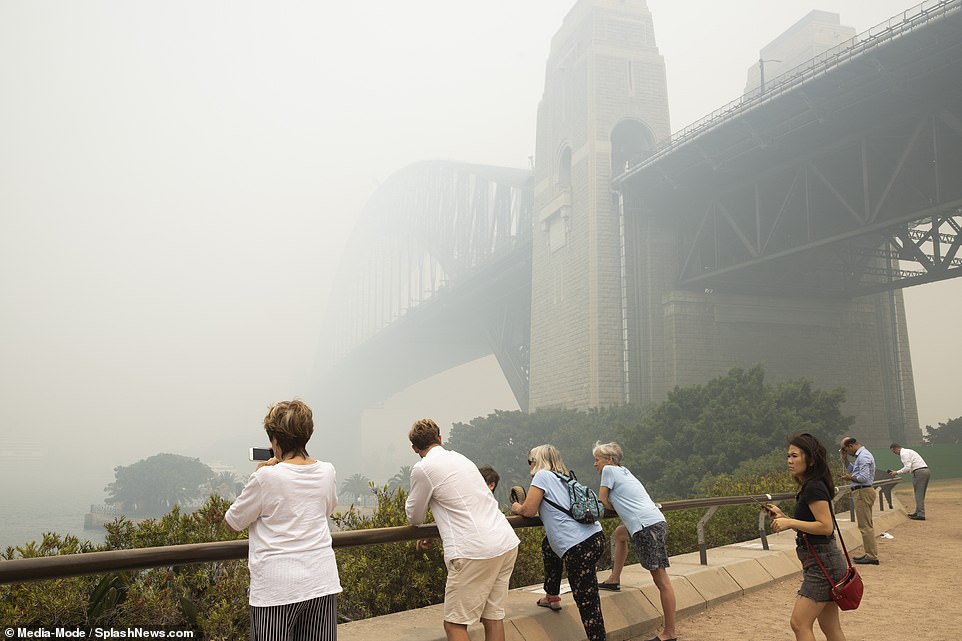 Sydney residents look on and take pictures as smoke shrouds the Sydney Harbour. The iconic landmarks including the Opera House and Harbour Bridge were barely visible as a thick smoke settled around the harbour 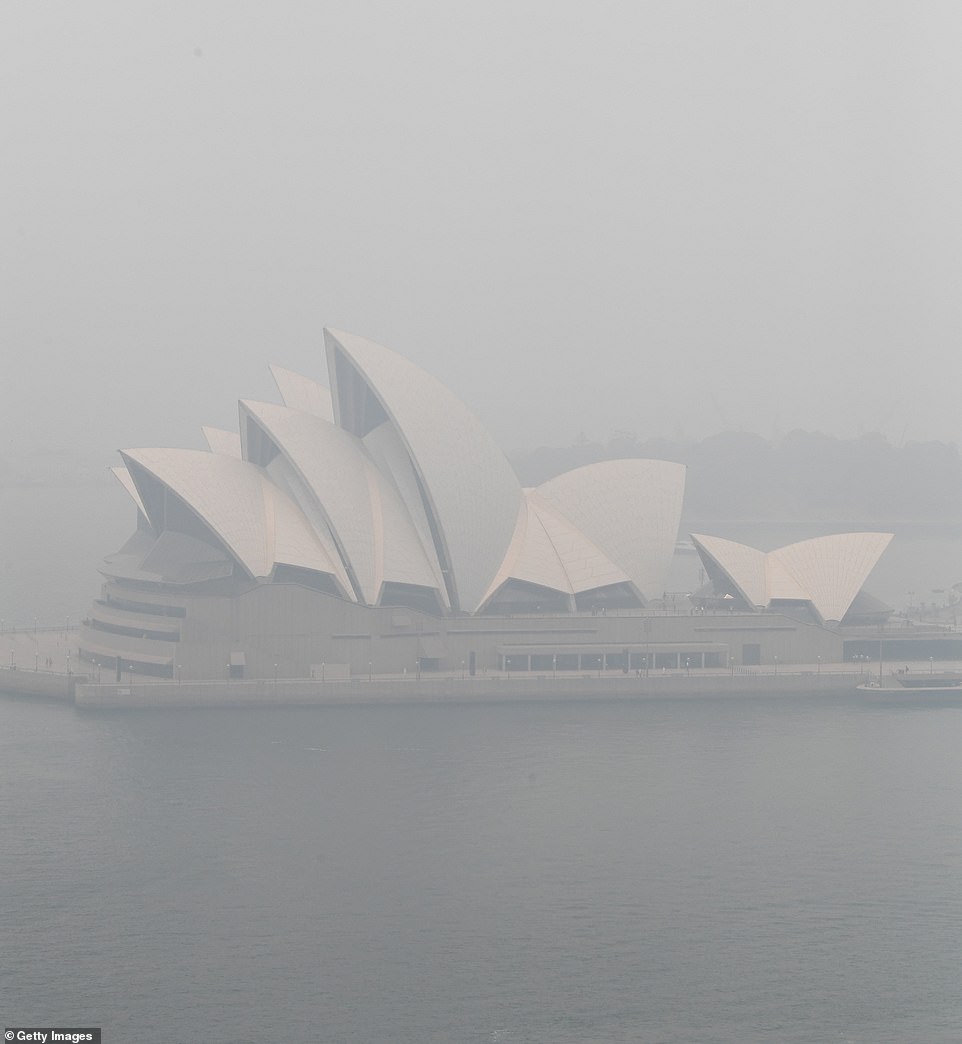 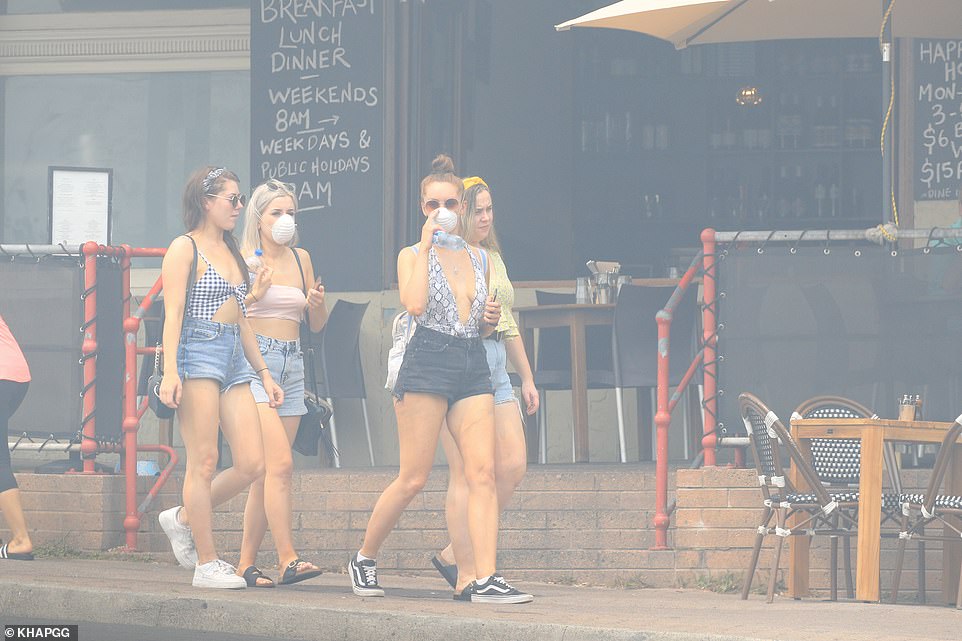 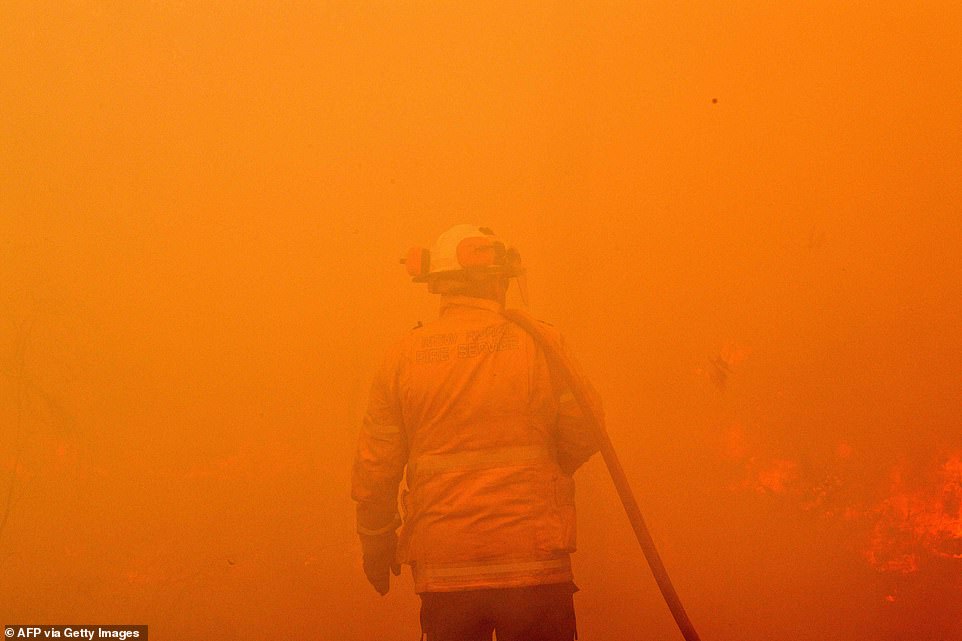 A firefighter conducts back-burning measures to secure residential areas from encroaching bushfires in the Central Coast, some 90 kilometres north of Sydney on December 10 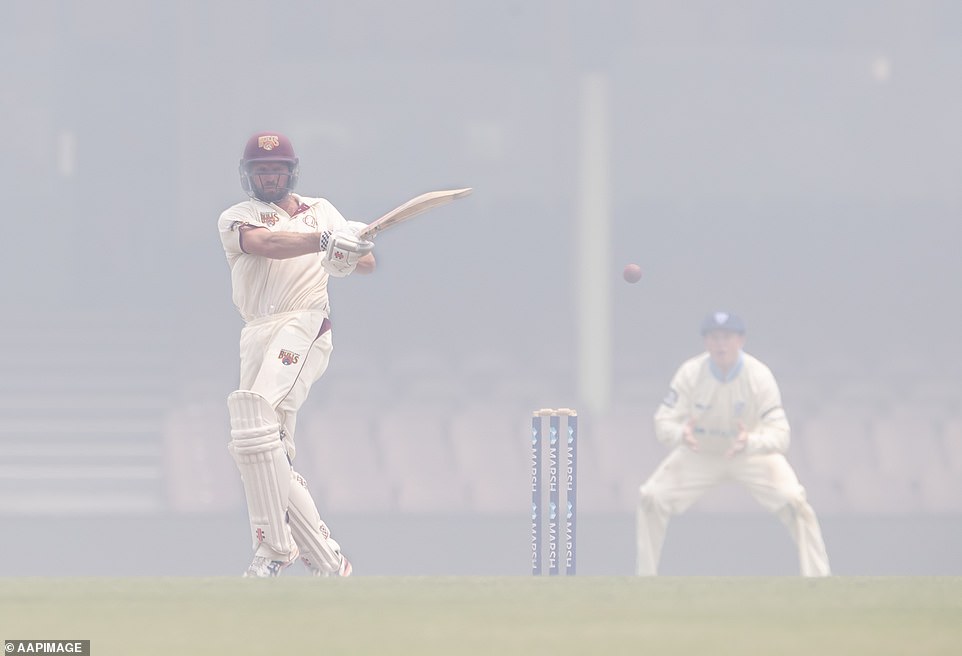 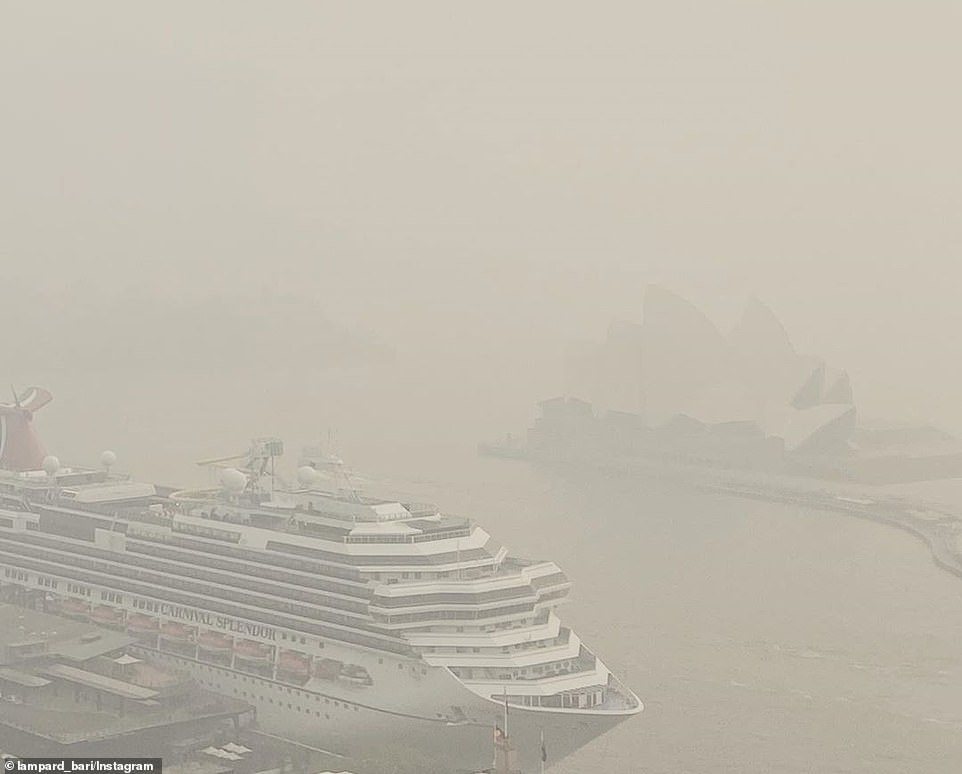 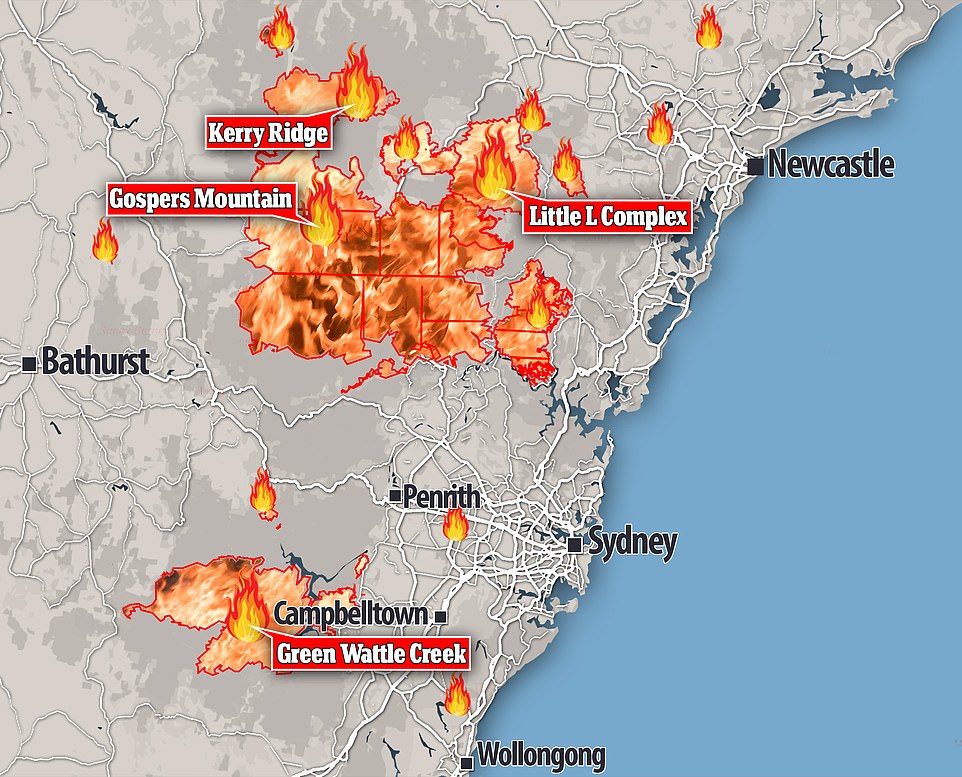 Traffic camera footage on the M1 highway about 50km north of Sydney showed people couldn't see further than a few metres ahead as the state's health authorities warned the 'grotty' smoke pollution was a recipe for severe illness.

The smoke was so strong the state's Rural Fire Service headquarters in Sydney's western suburbs was evacuated, while Rouse Hill, St Mary's and Richmond have all recorded PM2.5 particle readings defined as hazardous by the Bureau of Meteorology.

In Bondi the beach could barely be seen from the foreshore.

The heavy smoke had actually held back the force of the state's 85 bushfires, according to the NSW RFS, although they warned conditions may again worsen in the afternoon when winds pick up.

As of 12pm, 2,700 firefighters were battling 85 fires burning across the state - 42 of which were uncontained.

A total fire ban is now in place for nine areas across NSW. 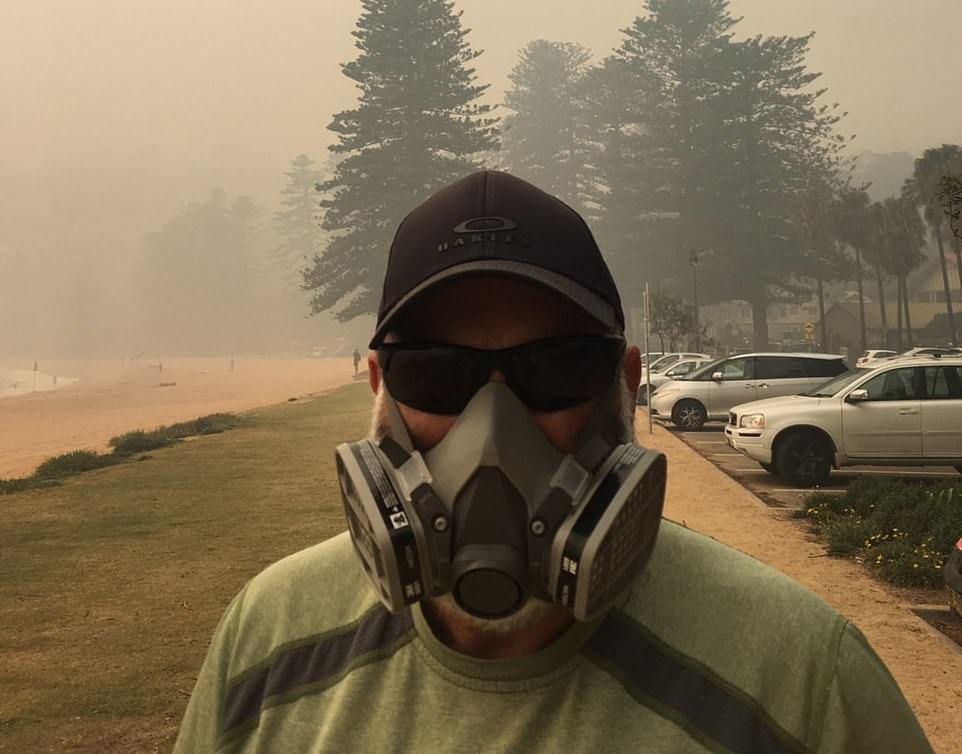 Particulate readings for PM2.5 in Mona Vale (haze pictured) on the city's north-east coast meant the suburb had the highest reported pollution levels in the world on Tuesday morning 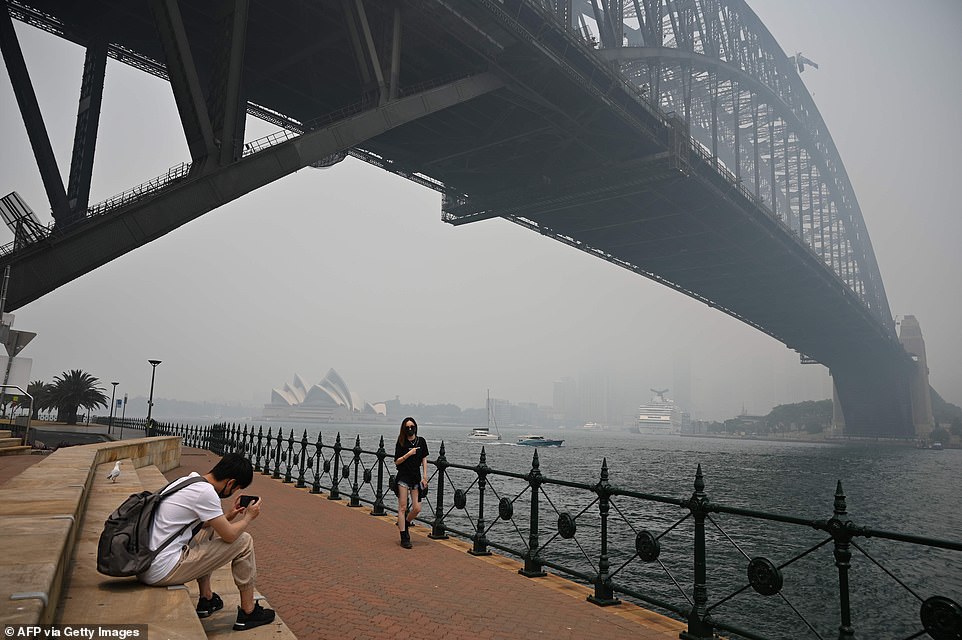 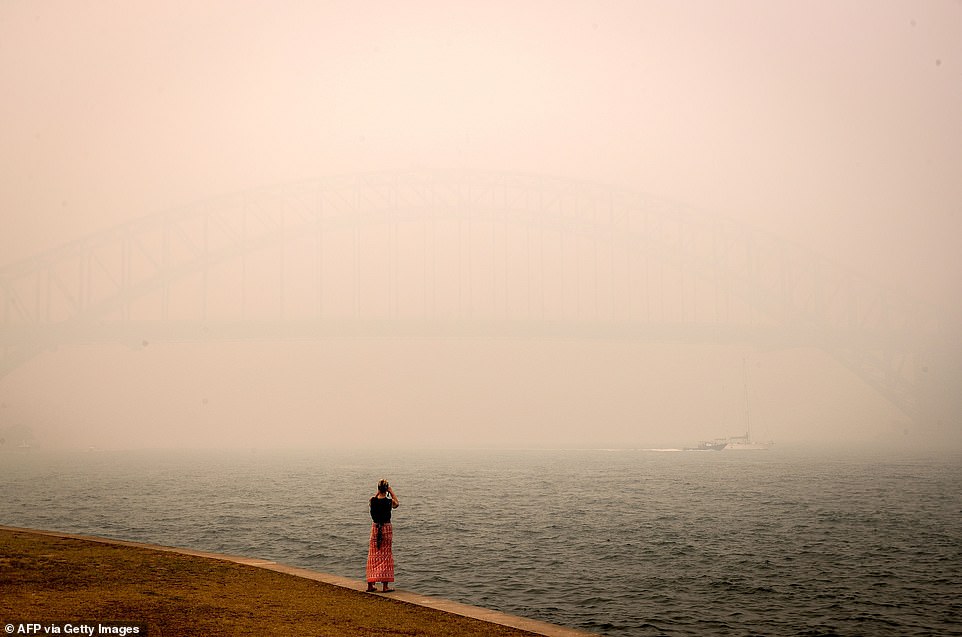 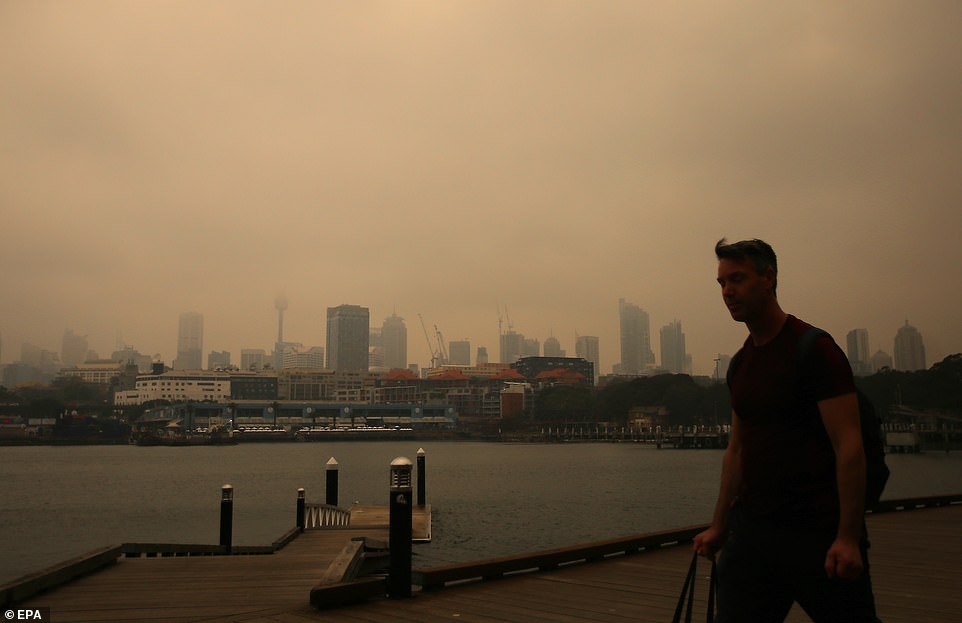 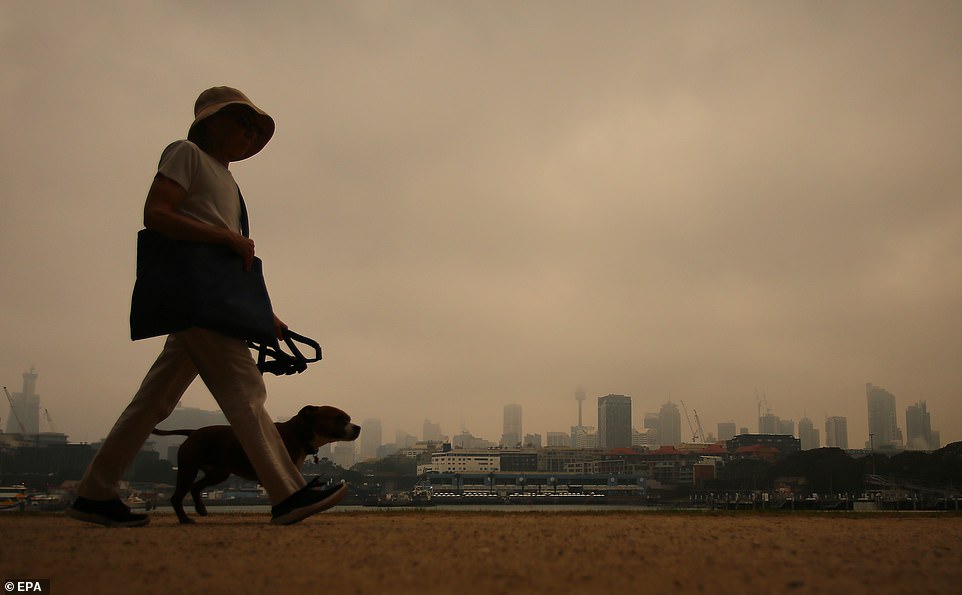 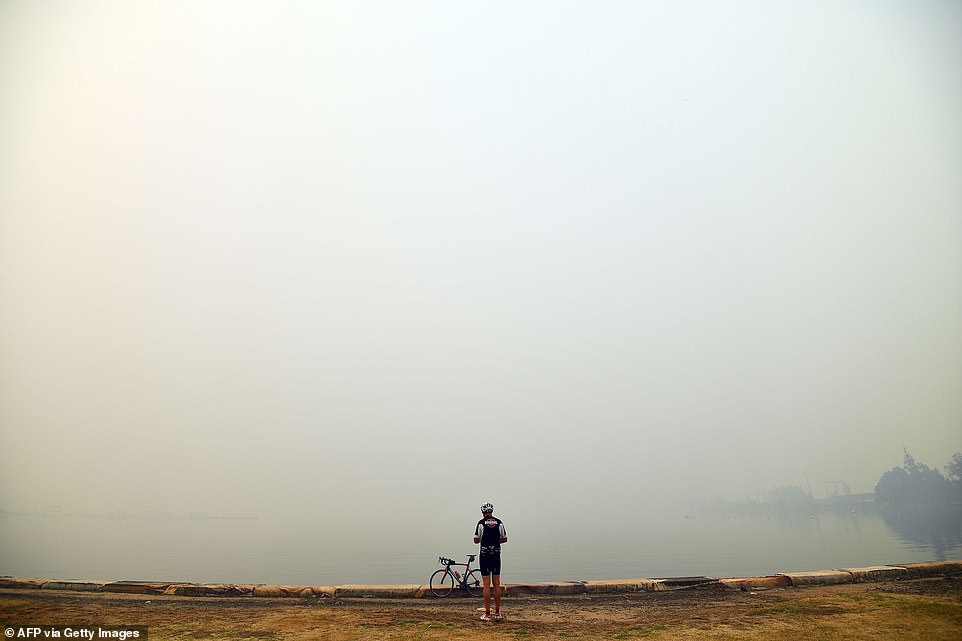 A cyclist takes pictures of the thick toxic smoke from bushfires cutting through inland forests in Gosford, north of Sydney on December 10 as Australians braced for bushfires to spread and intensify 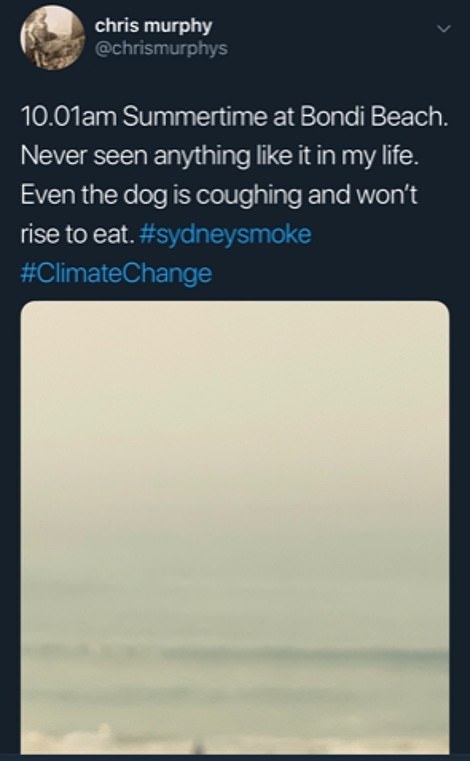 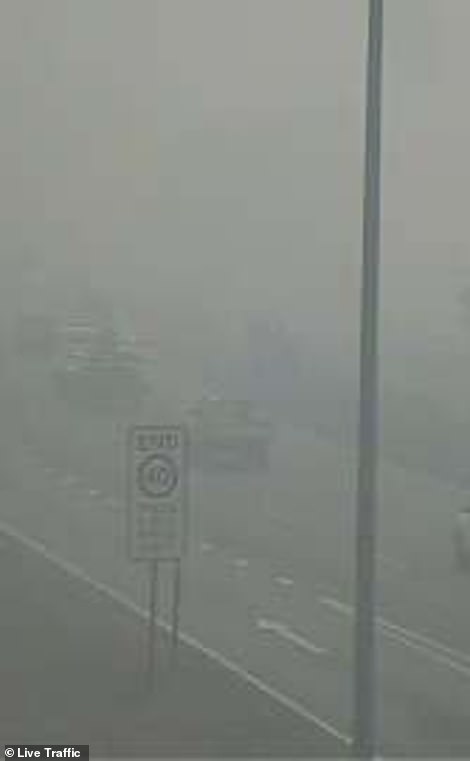 Traffic camera footage on the M1 highway about 50km north of Sydney, meanwhile, showed visibility down to a matter of metres

The BoM said the smoke had been trapped in the lower atmosphere and had then concentrated, although a southerly buster in the afternoon would help to reduce the smoke - especially closer to the coast.

The smoke build-up has also forced the cancellation of the traditional Sydney to Hobart lead-up race, the Big Boat Challenge, for safety reasons.

'We're very disappointed to abandon the 2019 Grinders Coffee SOLAS Big Boat Challenge but for the safety of spectators, public and competitors, we made the call,' Cruising Yacht Club of Australia commodore Paul Billingham said.

'The safety of all competitors, in addition to those working on the harbour, is extremely important to us and our number one priority.' 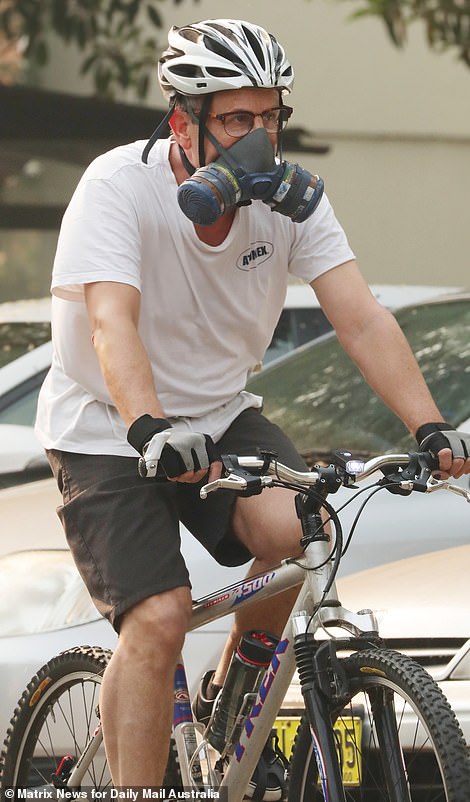 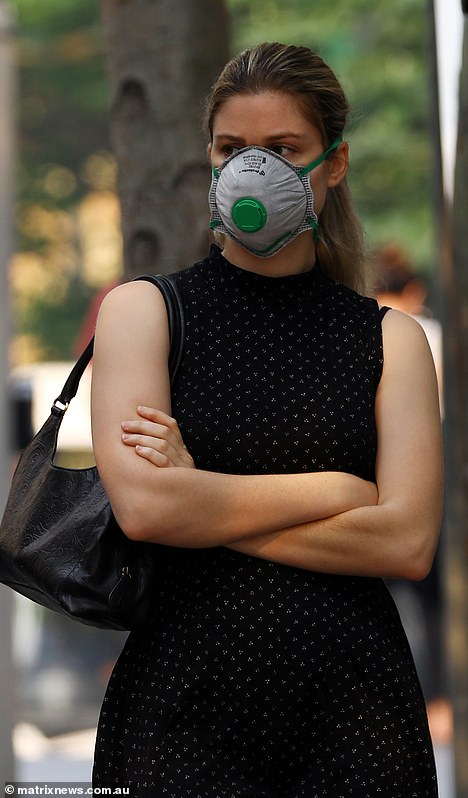 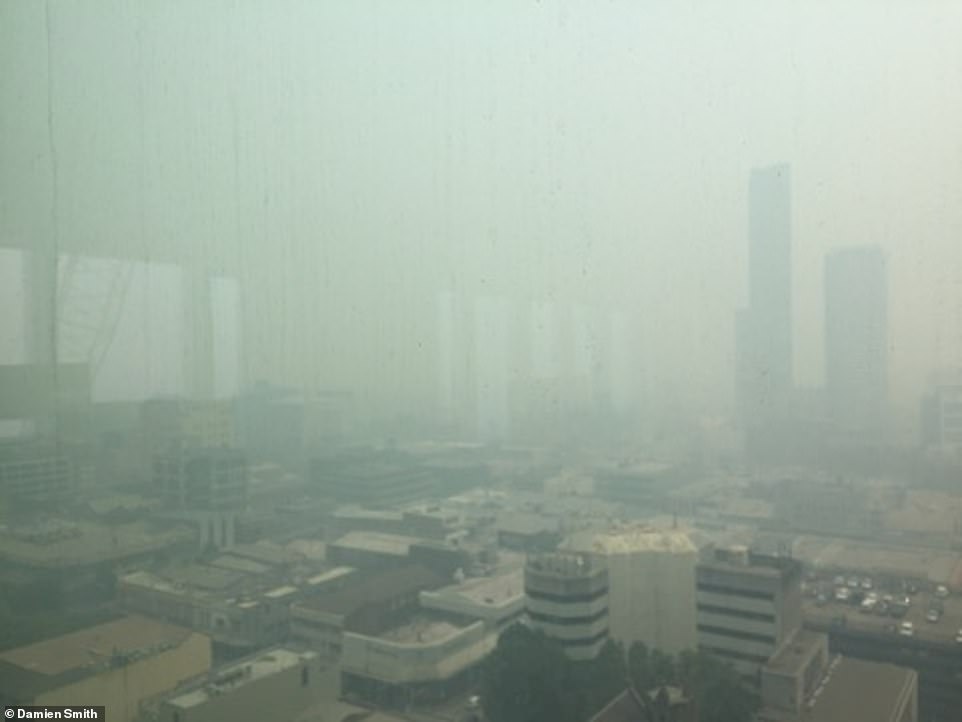 In Parramatta, the urban skyline had a similar level of poor visibility as the smoke was trapped in the lower atmosphere 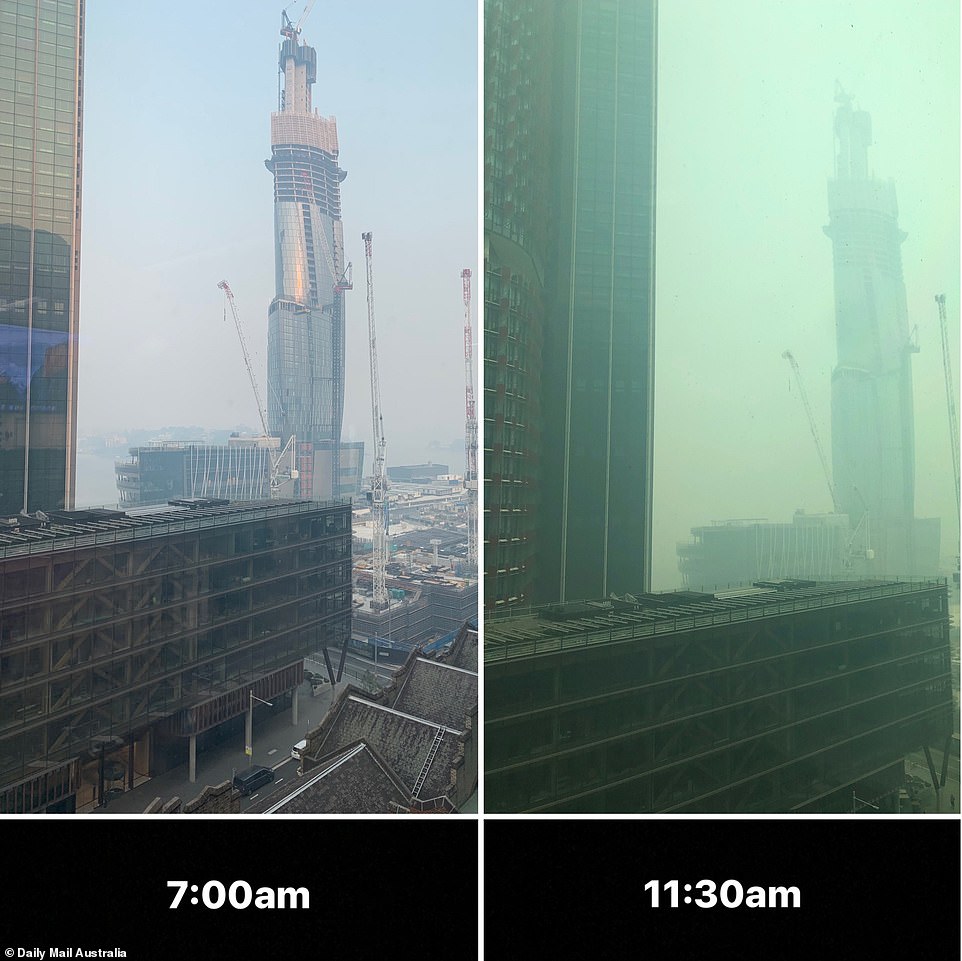 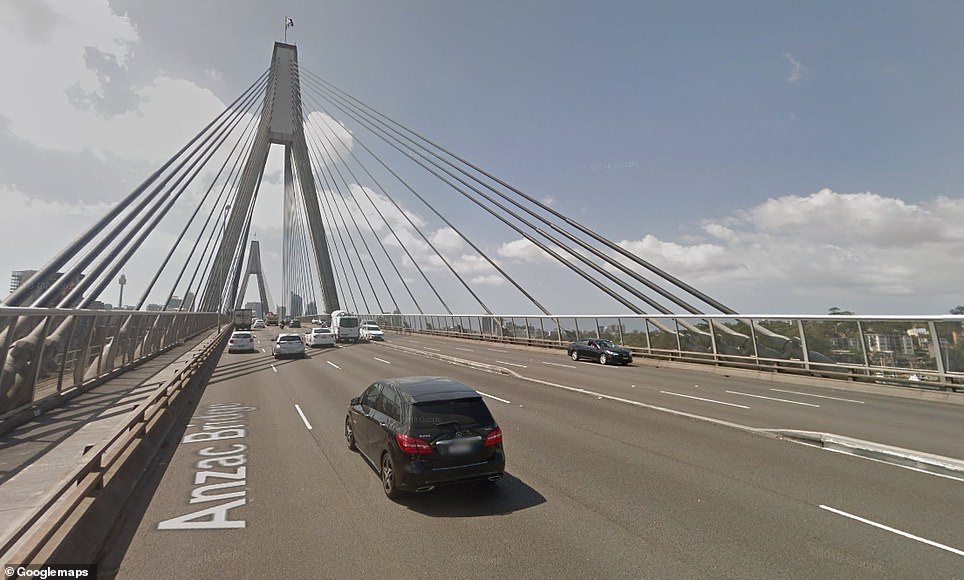 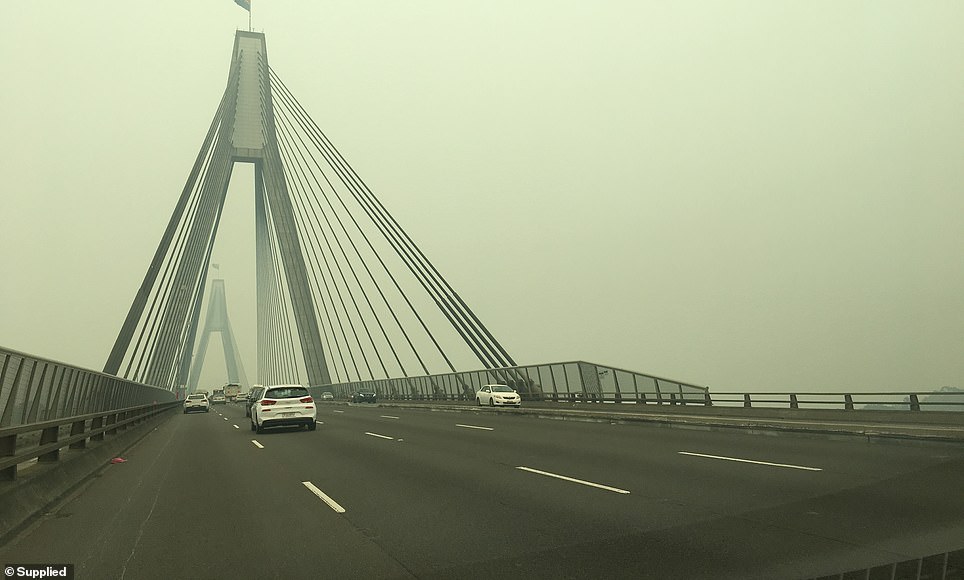 The conditions on Tuesday will also increase the level of stress on vulnerable people in the coming days, authorities warned.

NSW Health environmental health director Dr Richard Broome said it would be likely to be 'very hot and very smoky'.

'Hot weather and poor air quality are a recipe

PREV us news 'They're trying to impeach the son-of-a-bitch, can you believe that?' Trump ...
NEXT Queen's aides say announcement on Megxit deal 'imminent'