Sick baby waits 11 hours with no bed at same hospital where four-year-old boy was pictured sleeping on the floor Kertu Babik took coughing three-week-old Blanka to Leeds General Infirmary  She says that she arrived at 5.45pm and didn't get a ward and bed until 5am  Reported having to step over a parent who was sleeping on the floor at the site

An unwell baby waited 11 hours for a bed at the same NHS hospital where a sick boy was photographed sleeping on the floor.

Kertu Babik, said she tearfully and begged nurses to see a doctor at Leeds General Infirmary.

Three-week-old Blanka would spend a week recovering at the West Yorkshire hospital after being diagnosed with bronchiolitis. 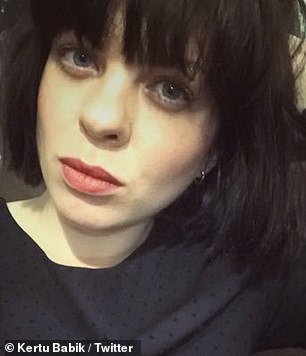 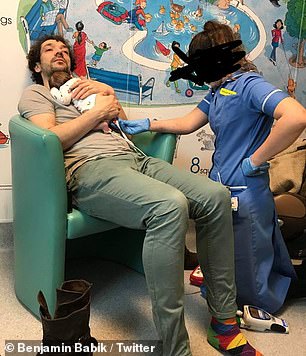 Kertu Babik (left) and her partner, Benjamin (right) say the NHS is crumbling and they had to wait for 11 hours to get their child a bed at Leeds General Infirmary

Ms Babik, 30, and her partner Benjamin, 36, said that though the staff were 'phenomenal', the NHS is now a 'sinking ship'.

They spoke to Mirror Online in support of the mother who found herself under fire after sharing an image of her four-year old-son on the floor.

The couple spent 11 hours waiting for treatment after arriving at A&E with Blanka at 5.45pm on November 22.

Around 8.30pm, they were sent to the Children's Assessment Unit, where they waited in a 'dark and boiling', corridor