A former vicarage that sits in the shadow of an historic village church that featured in Daphne du Maurier's Jamaica Inn has emerged for sale for £1.15million.

Penhallow Manor in Altarnun, Cornwall, is located directly beside the 15th century Church of St Nonna.

The Grade II listed property was the home of the parish vicar for centuries but has been in private ownership for a number of years. 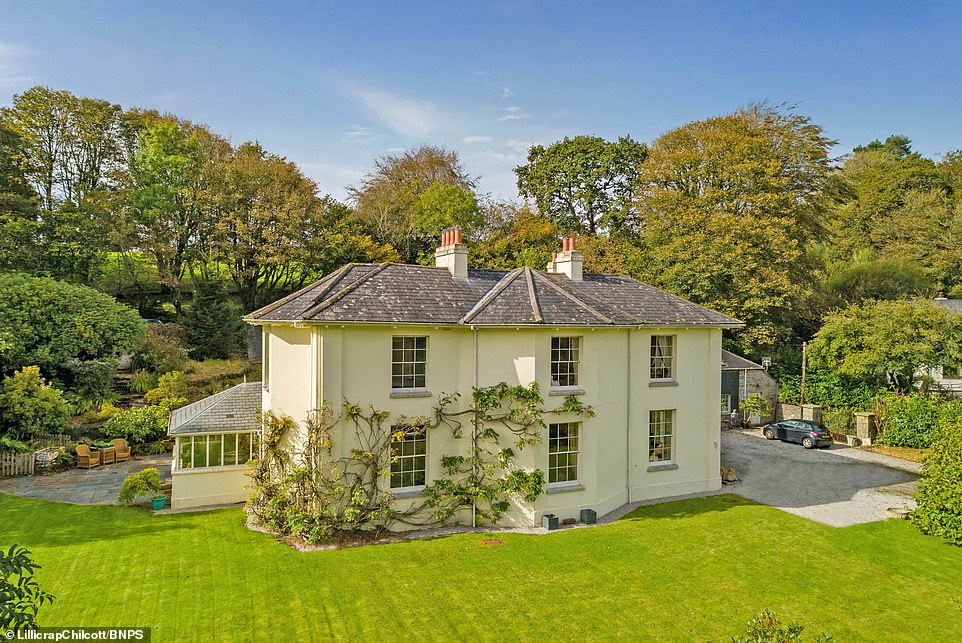 The former vicarage is situated next to a well-kept lawn and is partially covered in ivy, with a conservatory towards the back. The five-bedroom property sits in the shadow of an historic village church that featured in Daphne du Maurier's Jamaica Inn 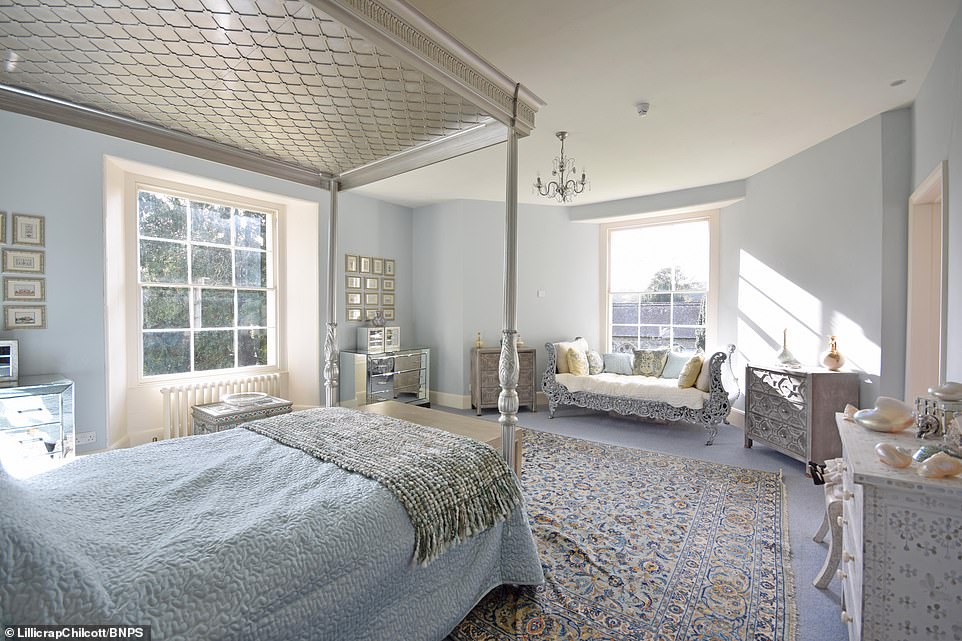 The spacious blue-and-silver themed bedroom is decorated with a four poster bed and a mirrored chest of drawers, with seashells on one of the side surfaces providing a coastal element to the home in in Altarnun, Cornwall 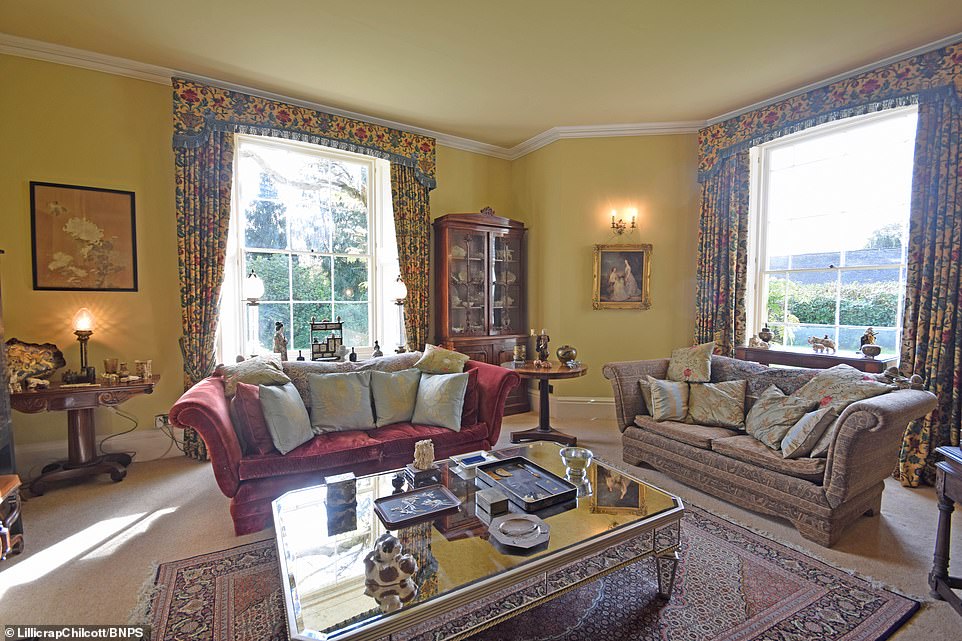 The sitting area features a large rug with windows stretching across three panes, alongside two sofas and a mirrored tabletop in the centre. The interior of the home is incredibly classical 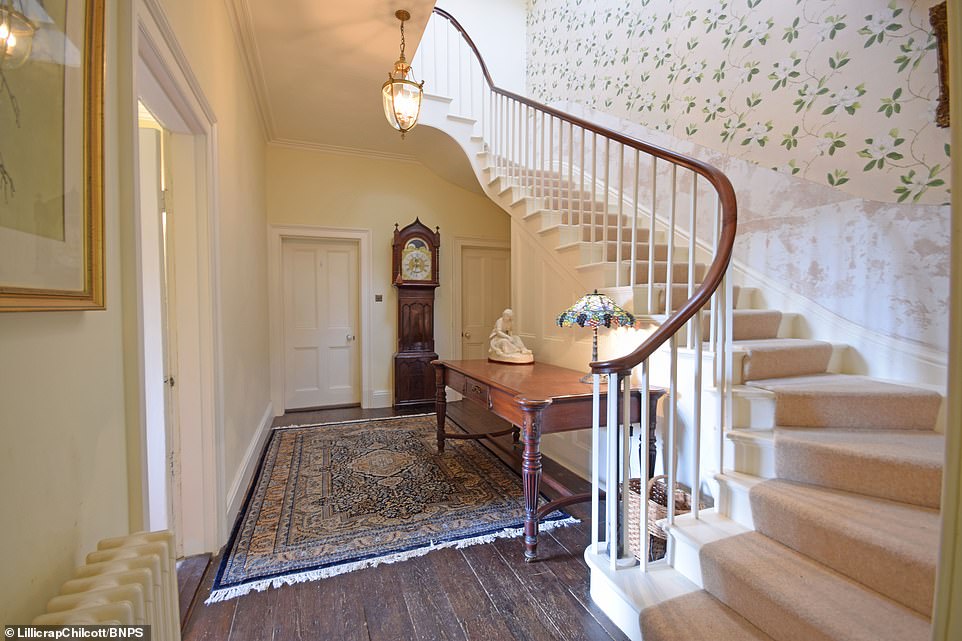 The main home is entered via a small vestibule, which opens into a reception hall with a turning staircase. A similar rug to that in the sitting room is placed in the entrance, with a grandfather clock also seen in the background

It is set on a picturesque plot which measures around three quarters of an acre and has a five bedrooms and four reception rooms.

The home enjoys views of the village including of the picturesque church, which was visited by du Maurier in 1930.

The playwright stayed in the Jamaica Inn hotel on Bodmin Moor which went on to inspire her 1936 novel of the same name and still stands today.

The church, which is about four miles away, was mentioned in the book as the place in which the evil vicar of Altarnun depicts himself in a painting as a wolf while the members of his congregation have the heads of sheep. 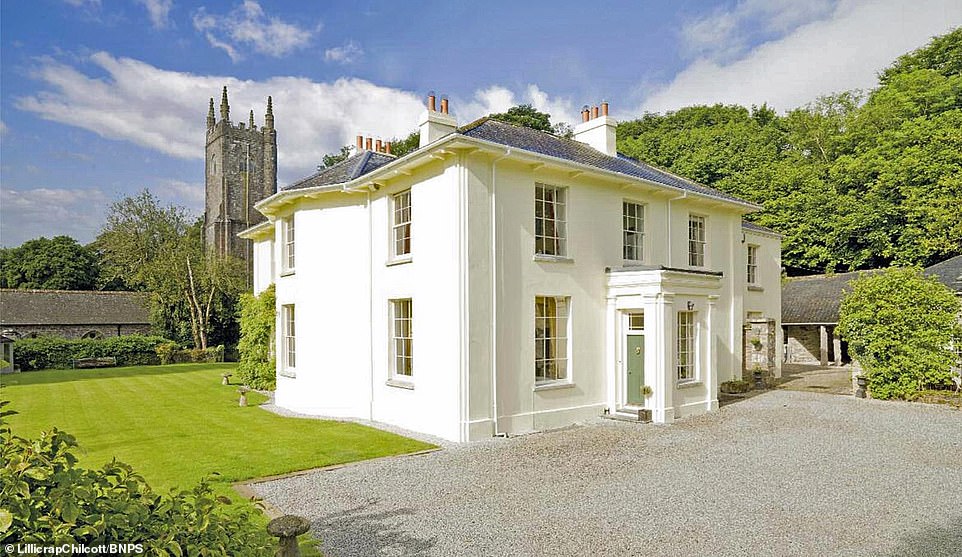 The home enjoys views of the village including of the picturesque church, which was visited by du Maurier in 1930. The estate agents say they are expecting a huge amount of interest in the house, which is overlooked by the church's 109ft tower 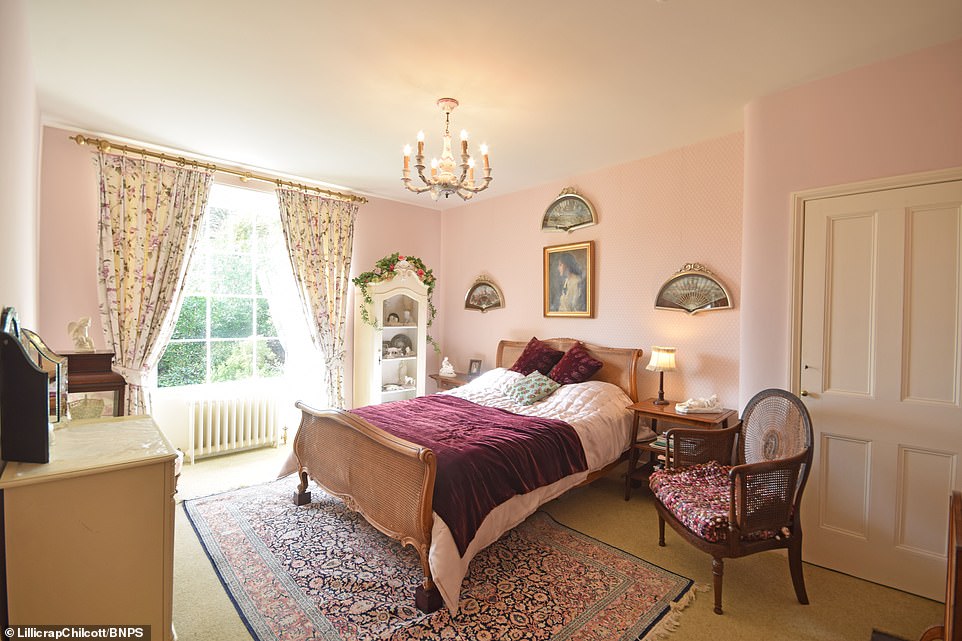 A chandelier hangs above one of the pink-and-floral themed double bedrooms with light pouring inside from the window. A single panel radiator is located next to the curtains, with a dark wooden sitting chair by the door 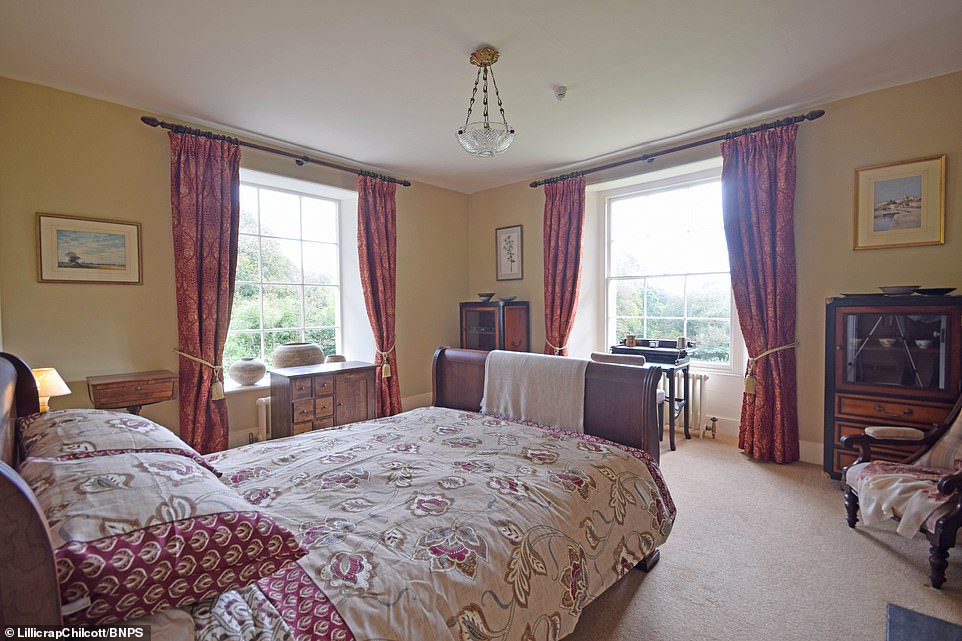 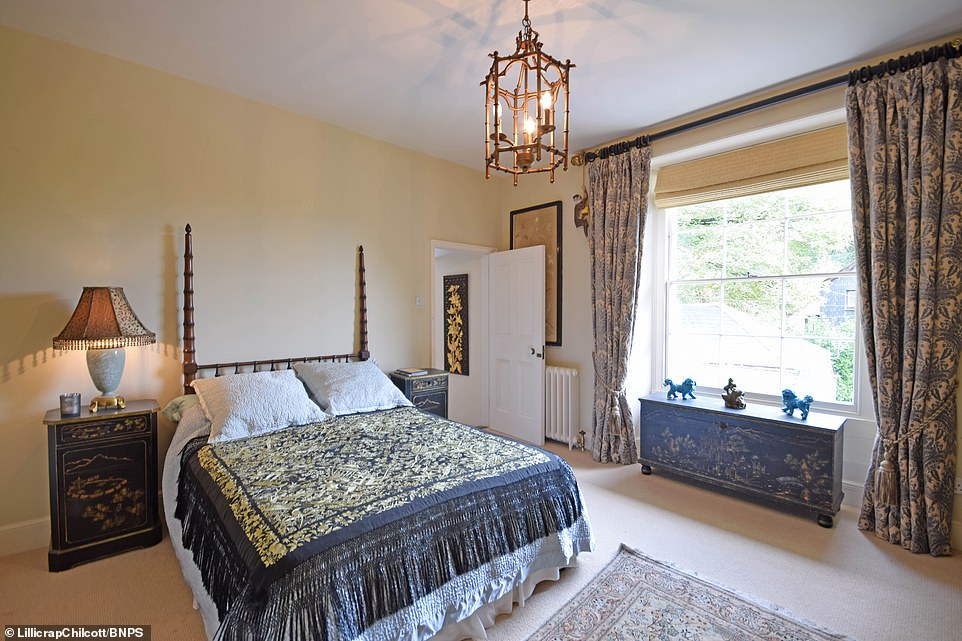 A slightly smaller blue-and-yellow bedroom is decorated with a tasseled blanket, a chest next to the window and light bamboo blinds. The double bed has two wooden posters and lots of surface space with two bedside tables 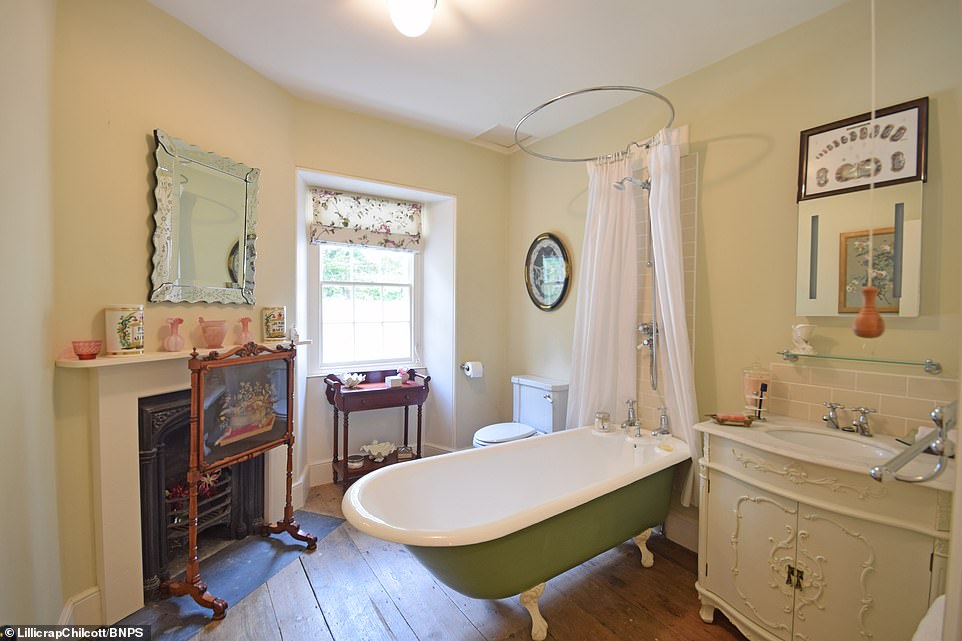 The olive-coloured bathtub sits in the centre of the bathroom and in front of a built-in fireplace, with a mirror hanging above. A shower and curtain ring is also featured above the tub with light shining onto the area from a nearby window 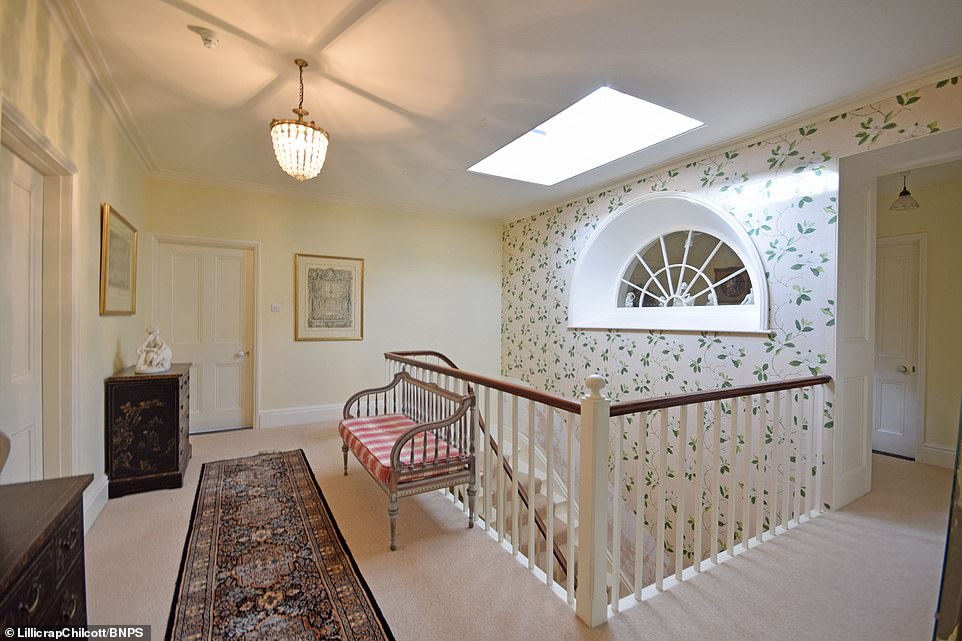 Upstairs is a galleried landing with an arch-top window, feature light and overhead window, which gives light to the staircase below. The landing area is decorated with a long rug, ornate wooden bench and two chest of drawers 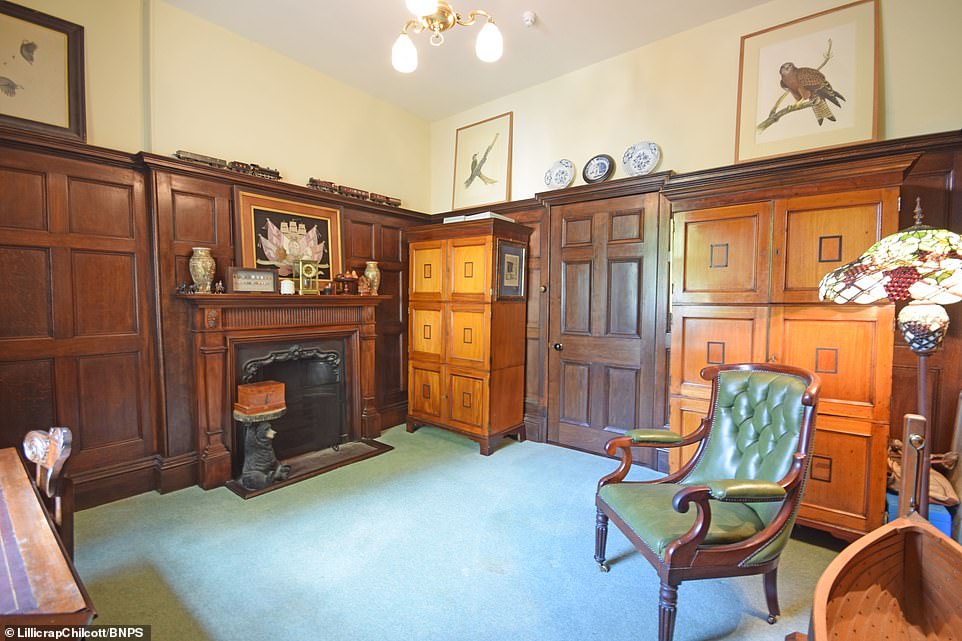 The study area features panelled walls that blend into the wooden door, above which three plates are placed, and two cupboards. The room has a dark built-in fireplace with a decorated mantelpiece and green leather-bound chair 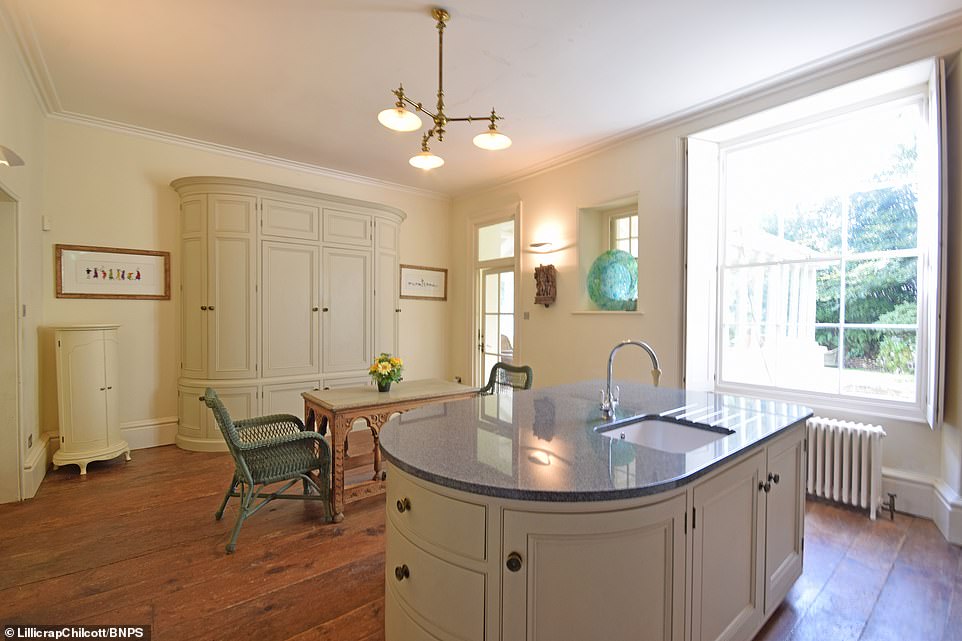