Boris Johnson was confident enough of victory that he did not draft a resignation speech, as his predecessors have done.

But he believed he would scrape home with only a slender majority of maybe ten MPs.

And as he awaited his fate on Thursday evening, sitting in Margaret Thatcher's old study on the first floor of 10 Downing Street, it was the spectre of another female Tory leader that haunted him.

Despite having run a sophisticated data-driven campaign, months in the planning and ruthlessly executed, he could not escape the fear he might repeat Theresa May's 2017 Election disaster.

But before long, Mr Johnson was heralded the most successful Tory leader in a generation, thanks to a remarkable result that saw old party allegiances ripped up, Labour strongholds obliterated and the people's decision to leave the EU finally cemented.

It had been a draining campaign, and the clearly exhausted Prime Minister was bumbling even more than usual at his victory party on Friday evening. 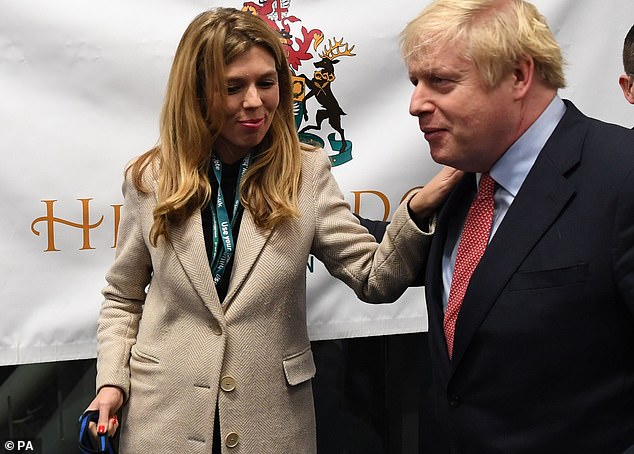 Boris Johnson at his constituency count in Uxbridge with Carrie Symonds, who later treated her boyfriend to a victory chicken curry 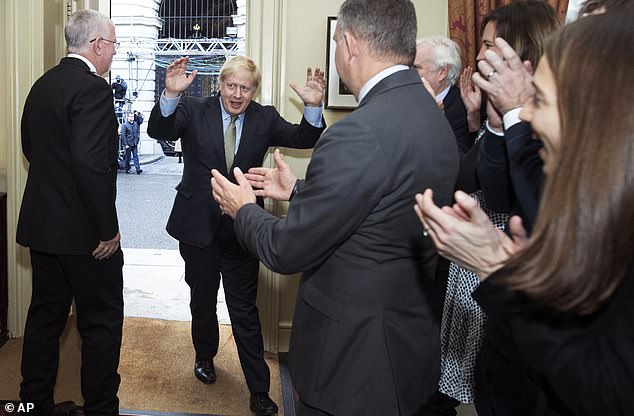 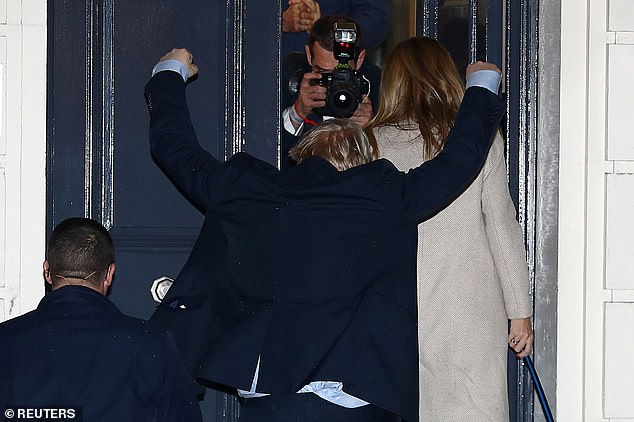 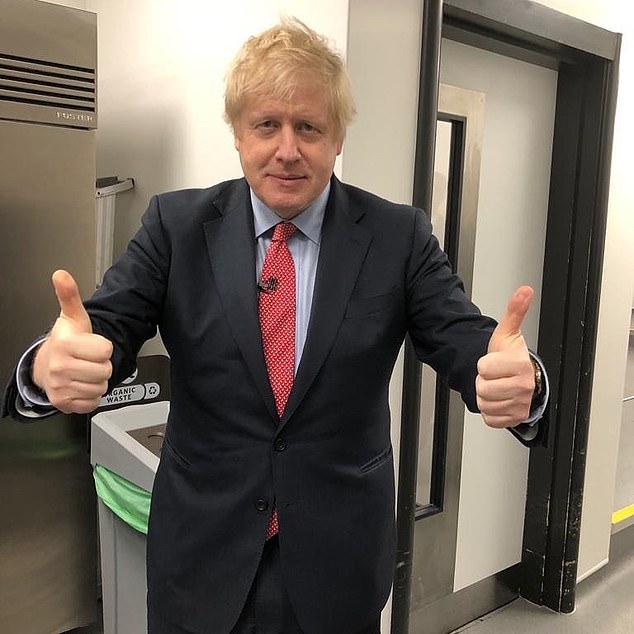 At 3.45am, with the Prime Minister growing his personal majority, he thanked his boozy staff. The party went on until 5am 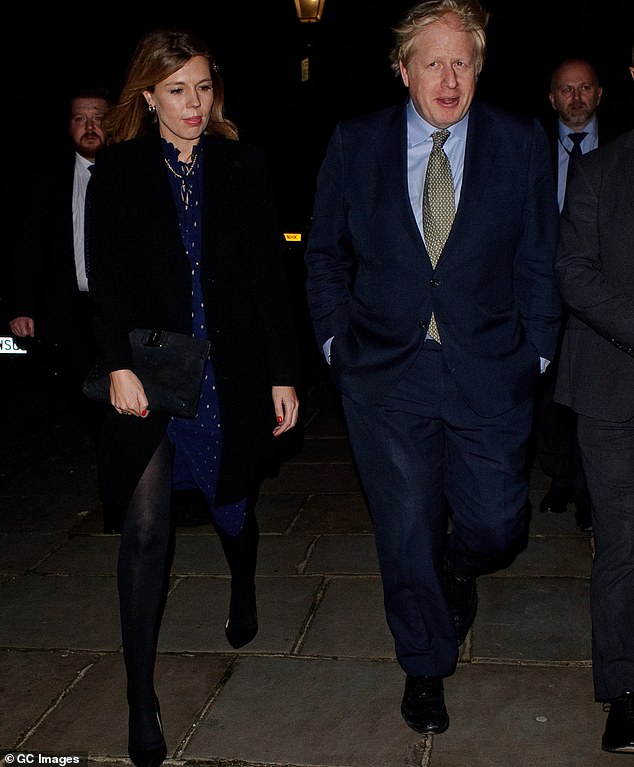 It had been a draining campaign, and the clearly exhausted Prime Minister was bumbling even more than usual at his victory party on Friday evenin

But the scale of his triumph prompted him to abandon his pledge not to drink until after he had guided Britain out of the EU.

'The majority means Brexit is secure, so who can blame him for that,' said a Downing Street source as Mr Johnson sipped his first glass of wine in months.

Later that evening he even received a warm embrace from David Cameron, his fellow Old Etonian who turned political foe during the Brexit referendum.

Their 'man hug', witnessed by former Chancellor George Osborne at a party thrown by newspaper owner Evgeny Lebedev, secured Johnson's place as top dog in a rivalry that has spanned decades.

The Prime Minister could not dare dream of such euphoria as he sat waiting nervously for the results on Thursday night.

A television had been wheeled into Lady Thatcher's old study, with Mr Johnson flanked by his closest aides and Ms Symonds, all grimly sipping tea as the minutes ticked down to ten o'clock.

Fruit, sweets and bottles of wine were untouched, and even their winsome rescue dog Dilyn taking his own seat at the table on his hind legs failed to cut the tension. 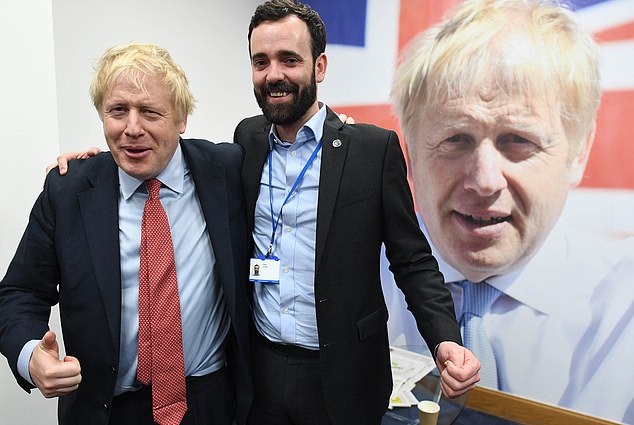 The party's Australian campaign chief, Isaac Levido (pictured with victorious PM), had drilled into staffers day in, day out, there was only ever one poll that mattered: the result at the ballot box 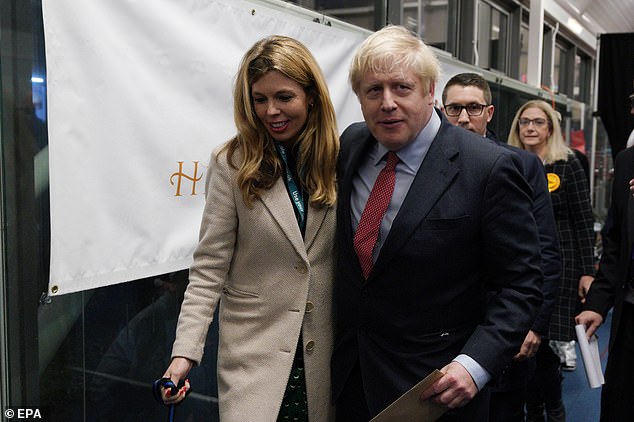 Beneath an oil painting of Lady Thatcher, brooding guru Dominic Cummings sat in an armchair, glued to his laptop.

Despite reassuring predictions from the finest pollsters and data geeks money could buy, everyone in the room was acutely aware such forecasts had proved wrong before.

As the party's Australian campaign chief, Isaac Levido, had drilled into staffers day in, day out, there was only ever one poll that mattered: the result at the ballot box.

The most accurate bellwether for that has traditionally been the exit poll commissioned by the broadcasters, and revealed the moment voting closes at 10pm.

So nerves in No 10 were palpable as Huw Edwards appeared on the screen to unveil the figures. A landslide, he announced. A predicted majority of 86.

Ms Symonds had been considered bullish for wagering a 25-seat majority, but this would be the greatest Conservative victory since Mrs Thatcher had sat in that very room in 1987.

So the beam of delight, the shock at the scale etched on Mr Johnson's face, was very real.

He threw his hands in the air, as Cummings leapt up still gripping his precious computer.

'Staring at the screen was discombobulating,' recalled one Downing Street adviser. 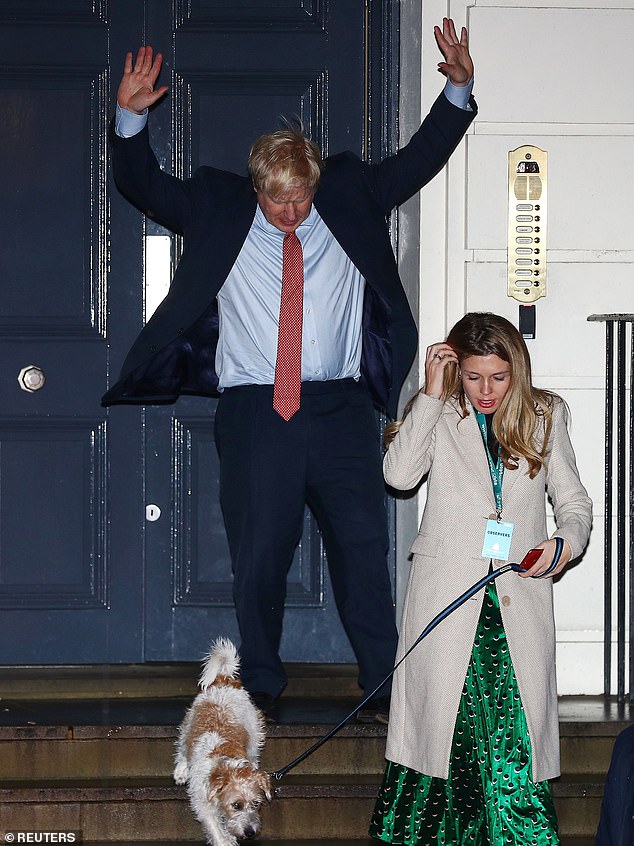 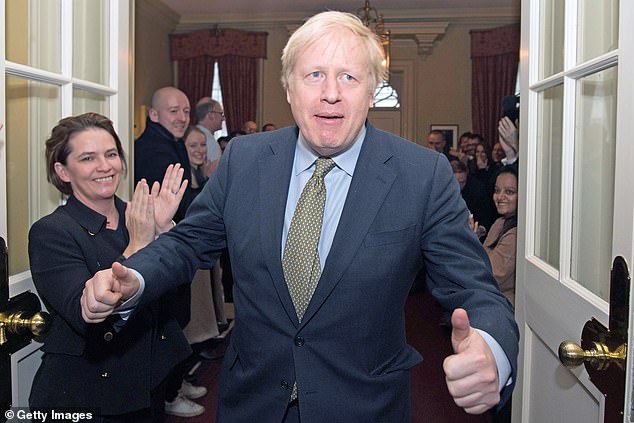 Just 500 yards away at the vast Conservative Campaign Headquarters, hundreds of staff gathered in front of a large cinema style screen to witness the same moment.

When it came, the room erupted into minutes of sustained cheering, as they discovered that five weeks of caffeine-fuelled, sleep-deprived campaigning had paid off.

They had secured the result many of them had felt was cruelly snatched from them by May's failings in 2017.

'The last time I saw anything like that was watching England qualify for a semi-final,' said one insider.

'The only thing missing was some idiot throwing their pint in the air, but it was not far off.'

While the result came as a surprise to many frontline staffers, for the most senior campaign team the exit poll was vindication of their numbers rather than a shock.

In fact, Tory HQ had been far more confident of victory than Mr Johnson.

Having honed his skills by helping Australian Prime Minister Scott Morrison achieve victory earlier in the year, Levido got the same band back together for his second campaign of the year. 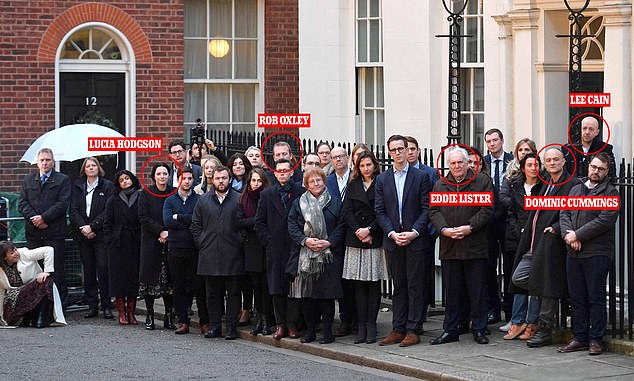 As the PM spoke on the steps of Downing Street, his top team, including chief of staff Eddie Lister, media manager Rob Oxley and strategist Dominic Cummings watched on 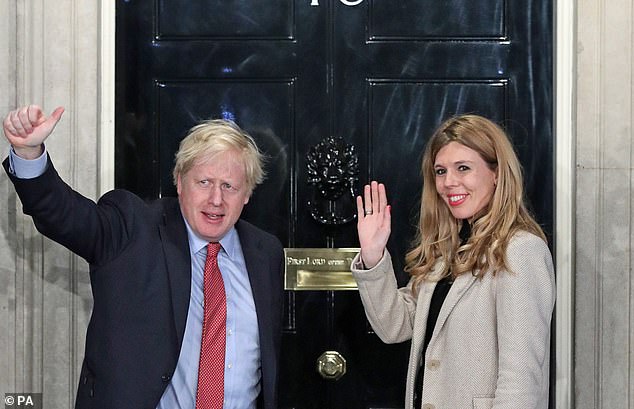 Polling by long-time Tory allies CFT Partners was done each night, and it was then set into context by modelling from blue-chip public-affairs gurus Hanbury Strategy.

Pollster Michael Brooks would be at his desk by 4am to crunch the numbers and some days not leave until 11pm.

His findings would be fed in to Levido's first meeting at 5.30am; followed by a 7.30am conference call with the PM and aides.

In that call on Thursday, Mr Levido had told Mr Johnson 'you pay me to worry and I am not worried'.

As results first trickled, then flooded in, it was clear that he – and the exit poll – were correct. The final majority was 80.

Mr Johnson left Downing Street to join the count in his own constituency of Uxbridge and South Ruislip.

After that result came in at 3.45am, with the Prime Minister growing his personal majority, he thanked his boozy staff. The party went on until 5am.

In Central London, aides had decamped from campaign headquarters to the nearby Queen Elizabeth II Centre for a victory rally.

Only a handful were quietly put in taxis instead, having celebrated a bit too hard to face TV cameras.

When Mr Johnson returned from West London, he could make his triumphant speech beneath banners proclaiming 'The People's