The gut-wrenching story behind a grandfather clutching onto a wooden pelican statue given to him by his grandson Dave McFarlane's holiday home was reduced to rubble by a bushfire on Tuesday  He was left with nothing but a wooden pelican statue after the ferocious fire  Holidaymakers sheltered at the beach as the fire enclosed Mallacoota , Victoria

A grandfather choked back tears as he shared how he has been left with nothing but a wooden pelican statue after a ferocious bushfire destroyed his home.

Dave McFarlane's holiday home was reduced to rubble when a bushfire closed in around the small coast town of Mallacoota in Victoria on Tuesday.

Residents and holidaymakers spent the day sheltering on the town's jetty and were told to be ready to get in the water at a moment's notice to keep safe.

When Mr McFarlane returned to his home on Wednesday, he was confronted with the heartbreaking news that it had been completely destroyed by the catastrophic blaze.

The only salvageable item Mr McFarlane found in his home, which he had built himself, was the small wooden pelican statue that his grandson gave him. 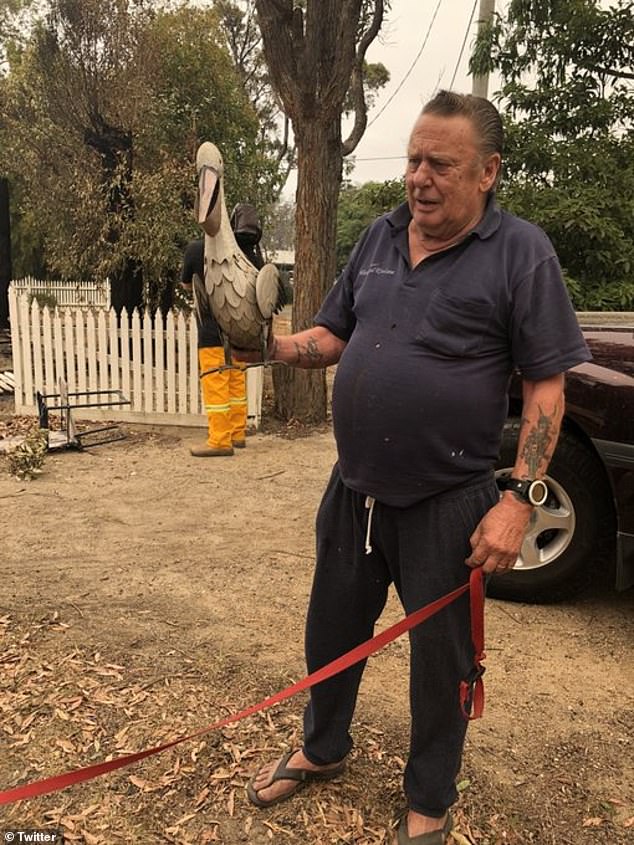 Through tears, he shared with 9news he planned to take the pelican home to his grandson.

Mr McFarlane had tried to save his home but was forced to flee to safety.

'It got too bad, so we went. The embers started to come, and it went right over and we figured we'd better go.'