Super-sized mice are being eradicated from an uninhabited island in the Atlantic Ocean – using more than £1.5million of the UK's foreign aid budget, it has been revealed.

Boris Johnson is coming under increasing pressure to control the Government's spending overseas – more than £14.5billion in 2018 – after he pledged to keep David Cameron's commitment to use 0.7 per cent of national income helping other countries.

But yesterday the Daily Mail revealed how the UK sent aid to China and India worth £151million in 2018, even though both are rich enough to mount missions to the Moon.

While the Prime Minister is understood to be considering the abolition of the Department for International Development (Dfid), which manages the foreign aid budget, critics have warned that other Whitehall departments, such as the Department for Environment, Food and Rural Affairs (Defra), are actually more wasteful with the money as they do not target it at those most in need. 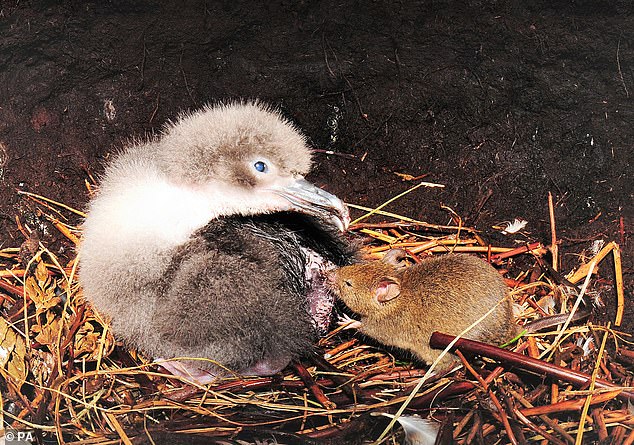 Official figures have now revealed that Defra paid £1,533,122 on the project on Gough Island to get rid of the mice over the past two years. The final bill for British taxpayers is expected to reach £2million.

Wildlife experts want to kill the mice to maintain the island's status as one of the world's most important nesting sites, home to more than eight million birds. Mice have flourished on the remote British Overseas Territory, located between St Helena and Antarctica, since they were inadvertently introduced by sailors in the 19th century.

Conservationists warn that at least two million chicks were lost every year to the rodents, which have evolved to be 50 per cent larger than average house mice.

Experts are concerned that rare species that nest there, such as the Tristan albatross, will become extinct unless the mouse population is eliminated. The albatrosses mate for life and produce just one egg every other year. Just 2,000 pairs of Tristan albatross now remain. Under the cull, which is being led by the RSPB, helicopters will be used later this month to bombard the island with poison.

As environment minister Lord Gardiner announced Government backing for the scheme in October, he said: 'The Gough Island project is an inspiring example of how we are helping our Overseas Territories protect their precious wildlife and plants.

'This ambitious work will be essential in saving endangered bird species. We will keep investing and working with partners to defend biodiversity at home and abroad.'

But Animal Aid, an animal rights campaign group, has criticised the plan, which it warned will lead to mice dying slowly in agony over several days as the poison takes effect. It has called for more humane methods, such as fertility control.

Other foreign aid spending on wildlife in 2018 included £124,994 on conservation of gharial crocodiles in Nepal.

The £151million that the UK sent to China and India paid for schemes to cut salt from diets, to send text alerts to problem drinkers and to find out whether yoga can halt diabetes. 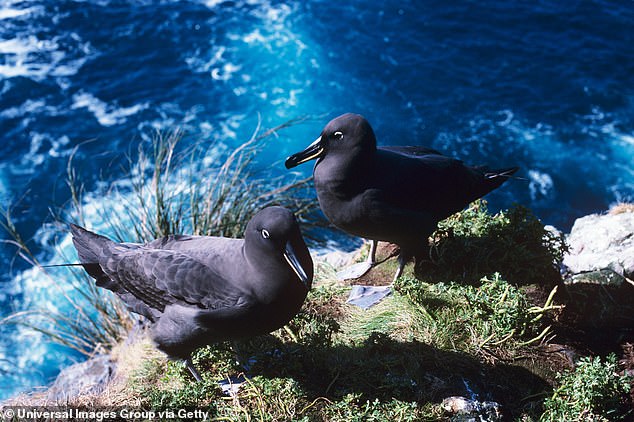 Official figures have revealed that Defra paid £1,533,122 on the project on Gough Island to get rid of the mice over the past two years (Pictured: Sooty albatross on Gough Island)

The vast majority of the aid money going to China and India was spent by departments other than Dfid, such as the Foreign Office and Department for Business, Energy and Industrial Strategy. Other cultural projects paid for by the foreign aid budget in 2018 included £50,467 on a scheme to document rock carvings in Turkey, including training 'local heritage professionals' to take 3D images of them, £25,000 on a project in Afghanistan to restore paintings damaged by the Taliban and £53,310 on preserving traditional food culture in Sudan by researching and documenting recipes.

As overseas development spending has increased over the years, departments across Whitehall have been drafted in to help dish out the money. The UK's foreign aid budget rose £493million in 2018 to reach £14.6billion, with more than a fifth spent by departments other than Dfid. In June, the National Audit Office warned so many different parts of Whitehall were doling out the cash that no one was tracking whether it was being spent properly. It found that the sums going to 'upper middle income' countries had risen over the past four years despite promises to target the poorest.

Save The Children said yesterday the Mail's revelations showed why it would be a mistake for the Prime Minister to scrap Dfid. Simon Wright, its director of global policy, said: 'Dfid is good at targeting aid to the poorest countries. Other Government