Brutal moment six prisoners fight off two guards and shoot dead one of them before breaking out of a jail in Colombia One of the officers was shot one dead on Monday at a jail in the southern Colombian area of Nariño Correction officer Edwin Landázuri was rushed by the inmates and was shot once after the group was able to take a gun away from his partner Heimar Mauricio Benavides attempted to save the 26-year-old Landázuri and pointed his weapon at the men before he was knocked down One of the inmates was going to shoot Benavides before another prisoner stopped him A third detainee gained control of the weapon and shot Benavides before he fatally shot Landázuri, who had two years on the job  Junior Arce Dios, a native of Peru, was the only prisoner arrested while the other five were still on the run as of Monday afternoon

Six prisoners fought off two prison guards, killing one of them, before breaking out of a jail in Colombia.

Surveillance footage showed the moment the group of men stormed out of their opened jail cell and attacked the guards.

The brutal assault happened on Monday at 1am at the CAI Champagnat temporary detention facility in Ipiales, a city in the southern department of Nariño near the border with Peru.

Corrections officer Edwin Landázuri, 26, was immediately pushed towards a corner wall as one of the prisoners attempted to take his service weapon.

Heimar Mauricio Benavides, 28, attempted to come to his partner's defense and pointed his weapon at the group before three of the inmates were able to slam him to the ground and disarmed him. 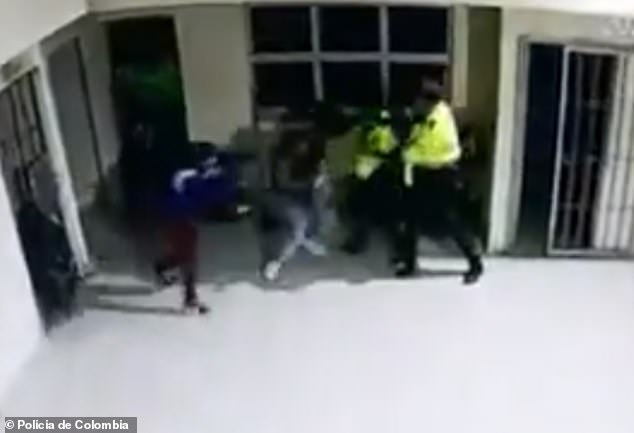