Middle England - a Brexit novel about a divided Britain in the wake of the EU referendum wins - £5,000 Costa prize Judges said Middle England by Jonathan Coe was 'the perfect novel for now' Follows group of characters first seen in author's 2001 book The Rotters' Club Mary Jean Chan won the poetry award with her debut collection, Fleche

By Jennifer Ruby Senior Showbusiness Correspondent For The Daily Mail 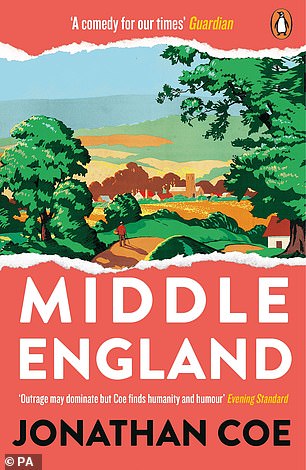 Middle England - a novel about a divided Britain in the wake of the EU referendum has won the £5,000 Costa prize

A novel about a divided Britain in the wake of the EU referendum has won the Costa Novel Award for 2019.

Middle England by Jonathan Coe, described as a 'story of nostalgia and delusion', was dubbed the 'the perfect novel for now' by the judging panel.

The story follows a group of normal people and their attempts to hold together relationships and careers amid the chaos of Brexit.