Militant climate change whingers REFUSE to cancel disruptive protest in Melbourne even though authorities say it will drain vital resources away from bushfire crisis Activist group Uni Students for Climate Justice rallied more than 12,000 people The event is to protest the Morrison government's handling of the bushfires Police have pleaded with the organisers to change the date  but they refused The bushfires have left 25 people dead and around 1,900 homes destroyed

Climate protesters will go ahead with planned marches in Melbourne on Friday despite authorities claiming it will drain resources from the bushfire crisis.

Environmental activist group Uni Students for Climate Justice rallied more than 12,000 people to march through the streets of Melbourne CBD during peak hour on Friday - predicted to be Victoria's next high fire danger day.

The event was organised to protest the Morrison government's handling of the bushfires that have left 25 people dead and around 1,900 homes destroyed.

Police pleaded with the organisers to change the date during a press conference and claimed resources would be pulled from the bushfire crisis to deal with the large-scale protest, but they refused. 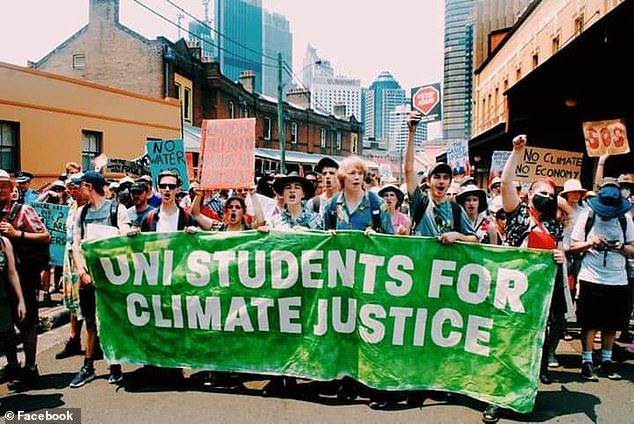 Environmental activist group Uni Students for Climate Justice (pictured in a previous protest) have rallied more than 12,000 people for the demonstration on Friday

'The timing of this protest probably could not be worse if we are serious about supporting the communities impacted by fire,' Acting Assistant Commissioner Tim Hansen said.

'To conduct an event which drains that number of police resources away from its number one priority, is really stretching us. It is not considerate.'

But Uni Students For Climate Justice representative Anneke Demanuele told 3AW the protest didn't need to pull funding from the fires because they 'don't need their assistance', The Herald Sun reported.

'We haven't asked the police to attend this