By Jake Hurfurt For The Daily Mail

At least 61 women in Britain have been diagnosed with cancer linked to a type of breast implants – but the health products regulator has refused to ban them.

Textured breast implants are used by UK clinics even though they are outlawed in France and Australia over their link to anaplastic large cell lymphoma.

More than 40 women are taking legal action against the products’ manufacturers and their lawyers have called for the implants to be pulled from the market. Smooth implants are also available and have no proven link to lymphoma, a cancer of white blood cells. 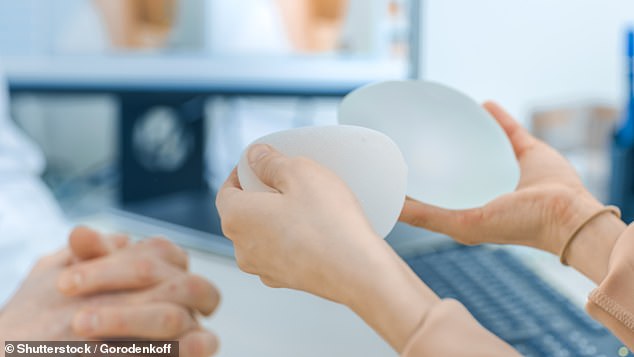 Textured breast implants are used by UK clinics even though they are outlawed in France and Australia over their link to anaplastic large cell lymphoma. Pictured is a file photo of a breast implant

Breast implant-associated anaplastic large cell lymphoma (BIA-ALCL) leads to a build-up of fluid around the implant and can cause swelling, pain and lumps. Early treatment is vital. Allergan, a major manufacturer of textured breast implants, has taken them off the market.

Despite this, the UK’s Medicines and Healthcare Products Regulatory Agency (MHRA) has not ordered others to follow suit, claiming the cancer is very rare.

Sarah Moore, a solicitor at Leigh Day, which is representing some of the women, told The Guardian: ‘I think there has been misdiagnosis and under-diagnosis – in the last 18 months there have been 17 more reported cases of ALCL. I think we’re going to see a significant increase in diagnosis.’ Although France and Australia have banned all new textured implants, they have not suggested that women who have them already should remove them.

But talcum powder gets the all clear

Fears that using talcum powder can increase women’s risk of ovarian cancer are groundless, says a