New EU chief Ursula von der Leyen today claimed it will be 'impossible' to strike a complete trade deal with the UK by the end of this year as she insisted Brussels and Britain will remain 'best of friends' after Brexit.

The new president of the European Commission will meet Boris Johnson for showdown talks in Number 10 this afternoon but she used a speech in London this morning to lay down the gauntlet to the PM.

The UK will leave the EU on January 31 but will then enter a 'standstill' transition period ending in December during which the two sides will try to hammer out the terms of a future trading relationship.

Mr Johnson has vowed not to extend the transition period in any circumstances and he wants the UK and EU to have agreed a full deal in the next 11 months.

But Ms von der Leyen said during an address at the London School of Economics, where she spent a year in hiding as a student in the late 1970s after becoming a target of the left-wing terrorist Baader-Meinhof gang, that a full deal would not be achievable.

She said: 'Without an extension of the transition period beyond 2020 you cannot expect to agree on every single aspect of our new partnership. We will have to prioritise.'

Ms von der Leyen hinted she would prefer the transition period to be extended but suggested that if it is not then the UK could leave the EU with only a partial trade deal in place.

The Prime Minister is expected to use his first official meeting with Ms von der Leyen to warn that the end of 2020 must be viewed as a hard deadline for talks.

Ms von der Leyen and the EU's chief Brexit negotiator Michel Barnier - who will also be at No10 this afternoon - have previously branded the schedule 'unrealistic'.

In another pressure tactic, it has emerged that Mr Barnier has been sabre-rattling over protections for EU citizens living in the UK, calling for a fully independent watchdog to guarantee their rights.

Ms von der Leyen's intervention came as Britain took another step towards formally leaving the bloc, with the Withdrawal Agreement Bill continuing its progress through the Commons. 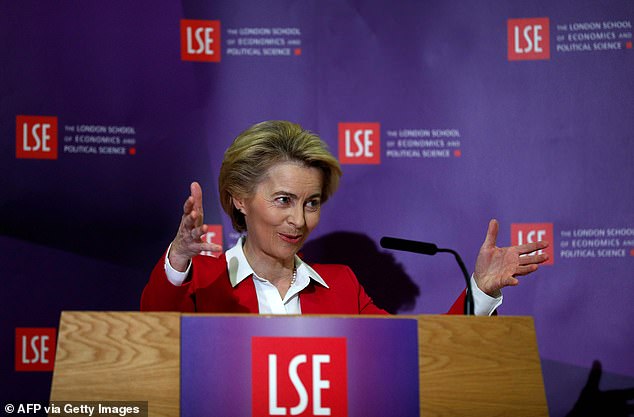 Ursula von der Leyen, pictured in London today, said 'without an extension of the transition period beyond 2020 you cannot expect to agree on every single aspect of our new partnership' 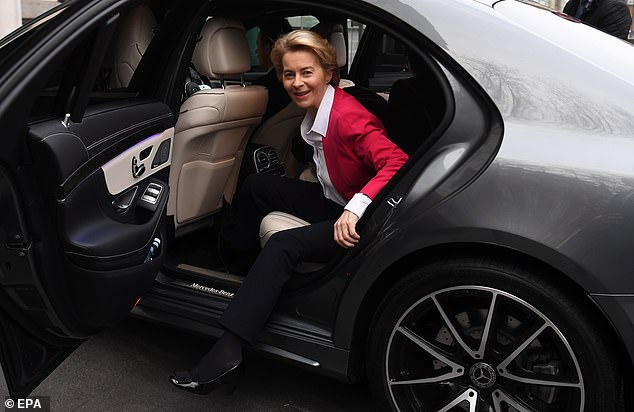 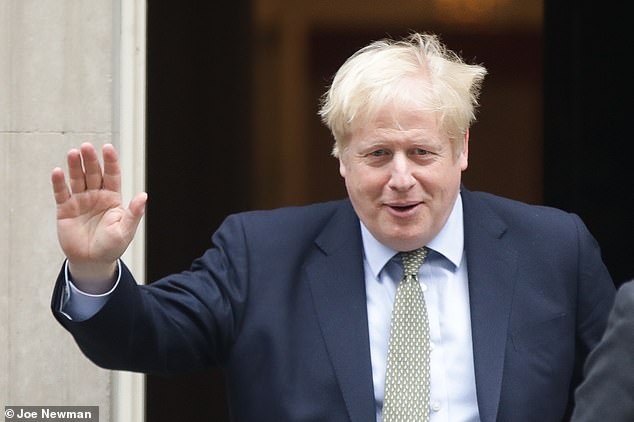 Boris Johnson, pictured in Downing Street today, will use his first official meeting with the new president of the European Commission to insist he will not countenance any extension of the transition beyond the end of this year

Mr Johnson's tough stance on the transition period echoes a key pledge in the Tory manifesto and means there is now a race against time to try to agree the terms of a future partnership.

Ms von der Leyen initially used her speech at the LSE, where she spent a year as a student, to launch a charm offensive as she praised the 'fantastic sense of humour of the British people’ and spoke of her 'love for this country’.

She said: ‘In just over three weeks on the 31st of January the UK will spend its last day as a member of the EU. This will be a tough and emotional day.

‘But when the sun rises again on February 1 the European Union and the United Kingdom will still be the best of friends and partners.

‘The bonds between us will still be unbreakable.’

But Ms von der Leyen struck a pessimistic tone as she said that while the EU wants to strike a 'truly ambitious and comprehensive new partnership’ with the UK she does not believe that work can be completed by the end of 2020.

She said: ‘We will go as fast as we can but the truth is that our partnership cannot and will not be the same as before and it cannot or will not be as close as before because with every choice comes a consequence, with every decision comes a trade off.’

She added: 'Without an extension of the transition period beyond 2020 you cannot expect to agree on every single aspect of our new partnership. We will have to prioritise.'

Ms von der Leyen said the EU was willing to work 'day and night' to get a deal done but warned that talks would be 'tough'.

Describing the end of the year deadline as 'very, very tight', she said: 'It is basically impossible to negotiate all of what I have been mentioning… therefore we will have to prioritise as long as we face that deadline of the end of 2020.’

The euro-federalist once seen as a successor to Merkel

Ursula von der Leyen is the daughter of Brussels-born Eurocrat Ernst Albrecht, a senior German politician who worked in the EU Commission in the 1950s.

It meant she spent her early years in the Belgian capital and partly explains her fanatic eurofederalism. 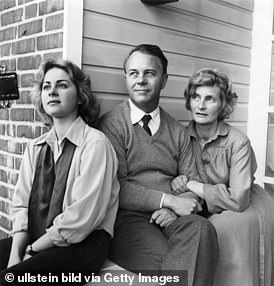 A former German defence secretary, who replaced Jean-Claude Juncker as EU Commission president, she has called for a 'United States of Europe' with its own army.

The mother-of-seven has a medical degree and studied at the London School of Economics as well as Stanford in the US.

She spent 12 months in the 'seething, international, colourful city' of London to avoid the baader-Meinhof Gang, a hard Left group that carried out a string of bomb attacks and assassinations, she revealed last year.

While in Britain she called herself Rose Ladson - the name of her American great-grandmother - to avoid detection.

The qualified gynaecologist only entered politics in her 40s, but regularly emerges in opinion polls as one of Germany's most popular politicians.

She was Angela Merkel's defence secretary from 2013, but became mired in controversy over the awarding of contracts –