An Islamic faith private school 'unlawfully' segregates its pupils according to their sex, an emergency Ofsted inspection has revealed.

Markazul Uloom in Blackburn, Lancashire, charges parents £1,500 a year and is registered as 'mixed'.

But an unannounced inspection by the education watchdog found male and female pupils are separated 'for the whole of their education and at social times'.

Students at the school, which caters for 11 to 19-year-olds, are 'not well prepared for life in British society', the report said.

Male pupils were banned from studying textiles, while girls were not allowed to take history classes. 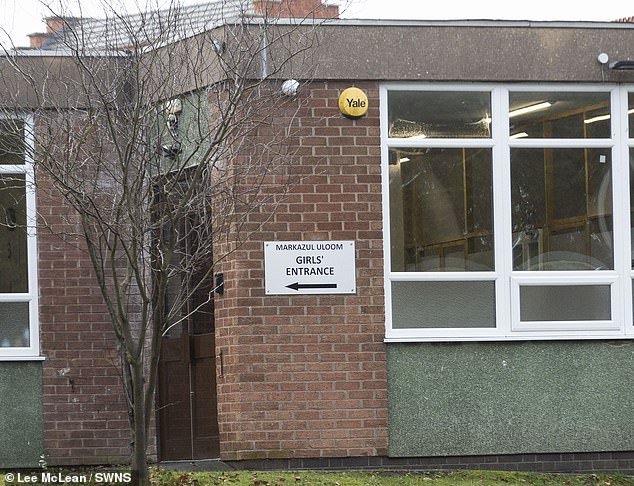 Markazul Uloom in Blackburn, Lancashire, charges parents £1,500 a year and is registered as 'mixed'. But an Ofsted inspection found girls and boys are taught in separate buildings and follow separate timetables. Pictured: A sign to the 'girls' entrance'

Mr Nixon revealed the school's single science lab is located in the 'girl's section', meaning male students are unable to access it.

He wrote: 'Boys do not have access to this high-quality learning resource to undertake practical experiments. This is detrimental to their education.'

According to the report, students have 'no opportunities' to socialise with members of the opposite sex during their time at school.

'This practice removes pupils' liberty to choose who they mix with,' Mr Nixon added.

The inspector described Markazul Uloom's operation as, 'unlawful discrimination because of sex', amounting to 'direct discrimination'.

Their practices are contrary to the Equality Act 2010, the report states.

Mr Nixon wrote: 'The proprietor has not ensured the school promotes respect for civil