Philip Ozard was born in St Saviour in 1889. His parents were Philip John Ozard and Elizabeth Le Boutillier. Philip had spent seven years in the Jersey Home for Boys as a child, admitted in 1898 at the age of nine and then leaving in 1905.

His admission record shows that he had one brother and four sisters and that his parents were both still alive when he was admitted to the home. While there Philip learnt his trade as a house boy and carpenter and on leaving he went to work at The Mount, Rouge Boullion.

Philip's registration card shows that he lived at Bellozanne Valley during the Occupation period. He was married and reported his occupation as a Window Cleaner. We can see from his card that he doesn't have a photograph – this is because, whilst the cards were produced in early 1941, the photographs weren't added until 1942 when Philip was already in prison.

Philip was sent to the Public Prison on 9 May 1942, his offence was listed as political and he was sentenced to five years in prison, the longest sentence in the register. On 14 May he was transferred to the military prison and then on 1 June he was sent to France with four other prisoners. Philip's crime was unauthorised possession of weapons.

Philip was initially sent to Caen Prison with two other islanders, Sidney Ashcroft and Harry Featherstone. He was then moved to Fort de Villeneauve-Saints Georges Prison and was then transferred on to Germany on 7 August 1942.

Dr Gilly Carr, as part of her work into Channel Islander's sent to mainland Europe has used the International Tracing Service files to follow Philip's movements from this date.

These records show that he was at Neuoffingen Forced Labour Camp until 9 May 1944, and then was transferred to Kaisheim Prison from 9 May 1944 until he was put on a forced march which ended at Landsberg Prison, where he was liberated by American forces on 30 April 1945.

Philip survived his experiences and returned to Jersey where he died in 1969. 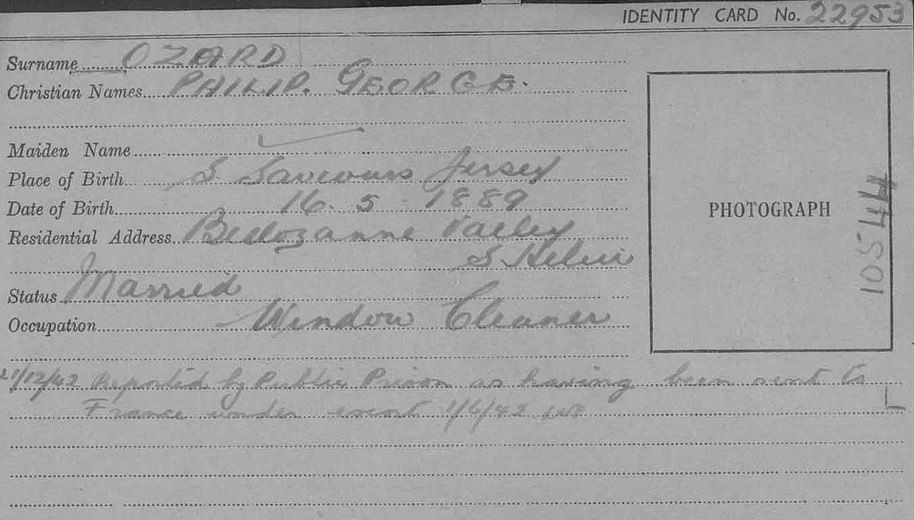 Philip George Ozard was sent to the Public Prison on May 9 1942, his offence was listed as political and he was sentenced to five years in prison, the longest sentence in the register. On May 14 he was transferred to the military prison and then on June 1 he was sent to France with four other prisoners. Philip's crime was unauthorised possession of weapons

Louisa Gould is one of the last names to appear in the register. She was arrested on 26th May 1944 for political crimes and sentenced to two years in prison. The register shows that Louisa was sent to France on 30th June 1944.

Louisa left on one of the last boats with prisoners to depart from the Island as the Channel Islands became cut off after D-Day and the allies advance through France.

By the time of the occupation Louisa was a widow with two sons one of whom was killed in action early in the Second World War. After his death she was approached by a Russian, Feodor 'Bill' Burryi, who was on the run and seeking shelter, he had nowhere else to go and Louisa felt an obligation to prevent another mother from losing her son.

Louisa's shelter of Bill was reported to the authorities by her neighbours in 1944. Fortunately for Bill the letter written by the neighbours was first received by the Victoria College Principle and he warned Louisa of the imminent search.

Bill was hidden but the authorities found a

PREV Bride and groom were only on crash plane because they stayed in Tehran to ...
NEXT Hawaii crash update: Tour copter hit ridge, then fell