Students run for their lives as storm tears through wall of school gym leaving three injured Powerful gales battered the city of Clinton, North Carolina in the U.S. on Monday Union Immediate School was caught up in the devastating winds of up to 85mph CCTV shows a microburst - a column of sinking air - blast a hole in wall of school

This is the terrifying moment a storm tears through a school gym ripping a huge hole in the wall and sending debris flying towards the children inside.

Powerful gales hit the city of Clinton, U.S. on Monday battering Union Intermediate School with gusts of up to 85mph.

CCTV shows a microburst - a column of sinking air - blast a hole in the wall of the school gym as children were playing basketball. 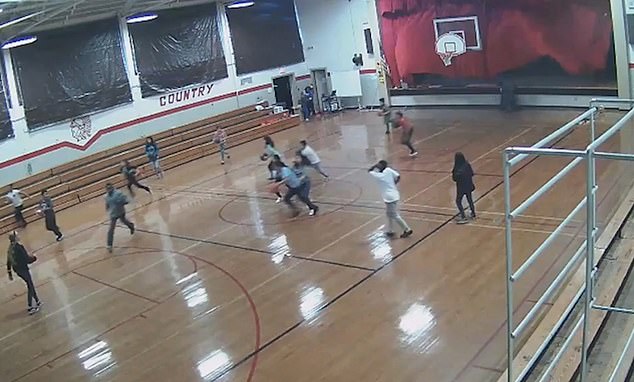 As the children realise the ferocity of the storm could damage the building, they start to run away from the stage area

Three North Carolina students were injured as the devastating winds sent debris flying towards the youngsters.

One of those injured, Chloe Brewer, a fifth-grade student, told WRAL: 'We were playing basketball, and it just sounded like something exploded in there.'

She and the other two injured were taken to hospital and released shortly after.

'I just turned around and was