Onion king! Mother, 38, is stunned to discover giant EIGHT-INCH snack in packet of Asda crisps and claims it could be a world record-breaker Janine Ross found the crisp in Asda's own-brand packet at children's party She is refusing to eat the snack and says it is her most prized possession  Pictures show it dwarfing other onion rings found in the same packet  Have you found a bigger crisp or an unusually shaped snack? Email [email protected]

A mother was stunned when she found a giant, eight-inch snack in a packet of Asda crisps and claims it could be a record-breaker.

Stunned Janine Ross, 38, made the bombshell discovery while sharing a packet of 69p Asda own brand onion ring snacks with her friend's daughter Izzy.

The previous record for the biggest crisp in Britain was 5.9 inches - a large Best Sweet Chili Crisps from Morrisons.

Janine says it said it was hard to get an exact reading as the long onion ring bends and twists. Pictured: The giant crisp that Janine Ross found among a regular packet of onion rings in a packet of Asda's own-brand snacks 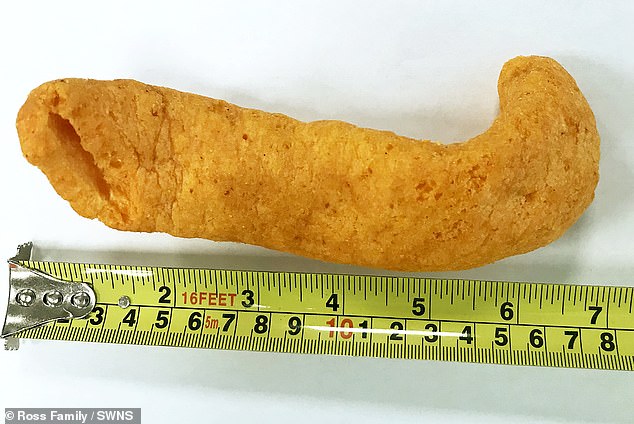 Pictured: The huge crisp next to a tape measure as Ms Ross believes that it could be the longest accidentally occurring of its kind

But she says if it was straightened it would beat the previous British record - and even the world title.

Have you found a bigger crisp or

PREV For whom the bill tolls! £120,000 is raised in a DAY to get Big Ben ringing ...
NEXT Hawaii crash update: Tour copter hit ridge, then fell